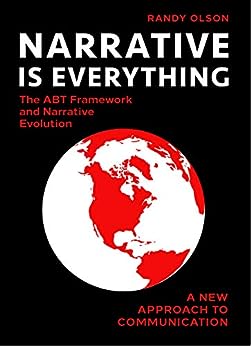 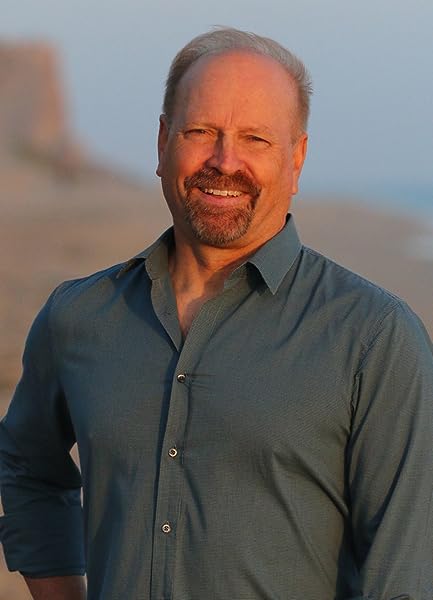 Narrative Is Everything: The ABT Framework and Narrative Evolution Kindle Edition

by Randy Olson (Author) Format: Kindle Edition
See all formats and editions
Sorry, there was a problem loading this page. Try again.
“Narrative Is Everything” is the culmination of scientist-turned-filmmaker Randy Olson's 40 year journey into Hollywood AND it may seem like just another “joy of storytelling” diatribe, BUT the book plays on two levels, THEREFORE you can take your pick — use it to improve your communication, or allow it to give you a new perspective on cultural evolution. On the practical side, it presents the ABT Framework (And, But, Therefore), showing its power and application in fields as diverse as business, politics, entertainment, science and religion. On the higher, more all-encompassing level, Olson combines his backgrounds in evolutionary biology and communication to propose a detailed mechanism of cultural evolution through what he terms, “narrative selection.” He argues that the brain is the selective agent and the ABT is the factor determining what survives and doesn’t survive over time in all cultures. From epic myths to nursery rhymes to news media to pop music hits, the ABT Framework is present everywhere, leading to the inescapable conclusion that “Narrative Is Everything.”
Read more
Previous page
Next page

Randy Olson earned his Ph.D. at Harvard University and achieved tenure at the University of New Hampshire before resigning and moving to Hollywood, obtaining an M.F.A. from the University of Southern California School of Cinema, and embarking on a second career as a filmmaker. Since film school he has written and directed the critically acclaimed films Flock of Dodos: The Evolution-Intelligent Design Circus (Tribeca, '06, Showtime) and Sizzle: A Global Warming Comedy (Outfest, '08), and co-founded The Shifting Baselines Ocean Media Project, a partnership between scientists and Hollywood to communicate the crisis facing our oceans.

Amazon Customer
5.0 out of 5 stars Narrative Imperative -- "And, But, Therefore" three words to change how we communicate
Reviewed in the United States on 2 June 2019
Verified Purchase
Humanity craves narrative and, in many cases, we've fallen into the trap of too much information, but there is hope, we can simplify and craft narratives to better communicate, therefore you should read this book.

Olson has extended his work for helping scientists to communicate ("Don't be such a Scientist" and "Houston, we have a narrative") to business, politics and entertainment. "Narrative is Everything" provides insights and a toolkit to improve our narratives and better communicate.

Trained as a scientist, I know first-hand how bad scientists can be at communicating what they do and what it means. Olson's "And, But, Therefore" (ABT) Framework developed out of his interest for scientists to better communicate, but it goes beyond science. Once understood, you can see how ABT is everywhere and how the "but" conflict makes things interesting and captures audiences. You'll also see how the AAA ("And, And, And") leads to boring communications.

T Ford
5.0 out of 5 stars Taking the power of narrative seriously
Reviewed in the United States on 3 June 2019
Verified Purchase
I have been following Dr. Olson now for more than a decade. As a professor of rhetoric and composition, I must express my undying admiration: This guy pushes past the academic BS to the core of what writing and communication are about. With charming humility, and a trove of humorous, astute, and contemporary examples, he exposes the heart of what it means to be an effective communicator.

I have been introducing his ABT framework to my composition classes for a few years now, and his "Houston, We Have a Narrative" is required reading for my Composition in the Social and Natural Sciences course. However, with "Narrative is Everything," and Olson’s expansion into the realms of politics, business, and entertainment, I see new potential. Students across all of the composition and literature courses I teach will benefit from the pragmatic advice he offers and the useful nuts-and-bolts strategies he demonstrates. This book is a must-read.

Citing everyone from Theodosius Dobzhansky to Peter Parker’s Uncle Ben, Randy Olson weaves an engaging and convincing argument that we will all benefit from taking narrative seriously.
Read more
2 people found this helpful
Report abuse

Liza Brizaa
3.0 out of 5 stars Not in color so you can’t see the his colored notes
Reviewed in the United States on 24 June 2021
Verified Purchase
This book is excellent. Excellent. This rating is not for the material, but for the fact that it’s printed in black and white (and grayscale) and the author specifically has color coded charts for the reader to review his different framework and methodologies. This is disappointing and warrants the two stars removed. The kindle version also is not in color (paper white, anyway)

I liked the kindle book and specifically bought the paperback to see the colored charts, and in my excitement, started making my notes in the margins only to later discover the charts are not in color. So I have two versions of the same thing and no charts, therefore, two stars docked.
Read more
Report abuse

Karey P.
4.0 out of 5 stars ABT to the rescue!!!
Reviewed in the United States on 7 December 2020
Verified Purchase
Give me a deeper understanding of ABT and its use and how it shows up different contexts and it allowed me to Get a better understanding of how to apply it to what I am writing. I really liked the color coding and the commentary that he provided in the appendixes. I was able to skim through some of the parts that I didn’t find as applicable or interesting, and that being said I really respect the author’s thorough treatment of the subject matter.
Read more
Report abuse

JJ
5.0 out of 5 stars Great chapters, even greater appendices
Reviewed in the United States on 22 June 2019
Verified Purchase
Just when you think Randy Olson couldn't possibly have more to say regarding to the ABT (and, but, therefore...) he does it again with this new book. I liked the chapters, but I loved the appendices: the difference between story and narrative (so interesting), the color coding for correcting narratives (and explanation of where narrators went wrong). See the discussion of Clerks and Hillary Clinton's speech for two extremely helpful examples for understanding communication in the attention age.
Read more
One person found this helpful
Report abuse
See all reviews
Back to top
Get to Know Us
Make Money with Us
Let Us Help You
And don't forget:
© 1996-2021, Amazon.com, Inc. or its affiliates