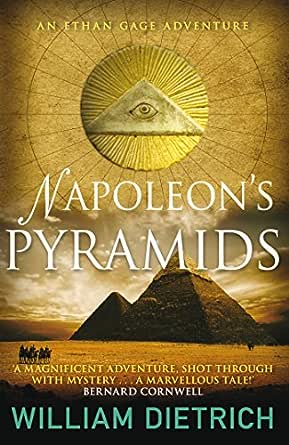 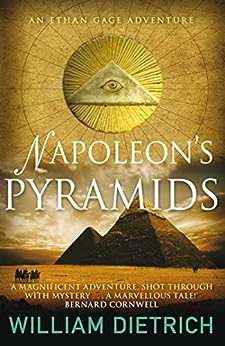 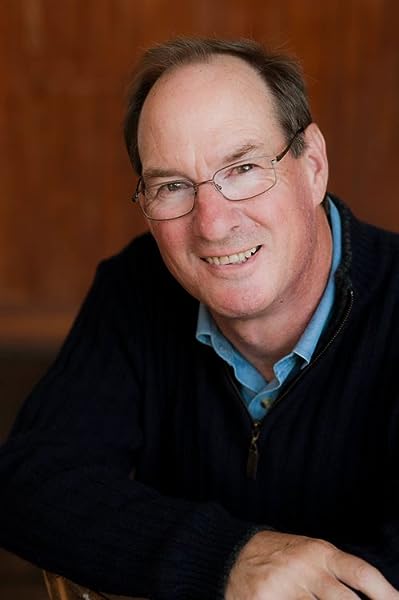 The world changes for Ethan Gage--onetime assistant to the renowned Ben Franklin--on a night in postrevolutionary Paris when he wins a mysterious medallion in a card game. Framed soon after for the murder of a prostitute and facing the grim prospect of either prison or death, the young expatriate American barely escapes France with his life--choosing instead to accompany the new emperor, Napoleon Bonaparte, on his gamble to conquer Egypt. With Lord Nelson's fleet following close behind, Gage is entangled with generals, archaeologists, and mystics. And in a land of ancient wonder and mystery, with the help of a beautiful Macedonian slave, he will come to realize that the cursed prize he won at the gaming table may be the key to solving one of history's greatest and most perilous riddles: Who built the Great Pyramids ... and why?

William Dietrich is the author of fourteen novels, including six previous Ethan Gage titles--Napoleon's Pyramids, The Rosetta Key, The Dakota Cipher, The Barbary Pirates, The Emerald Storm, and The Barbed Crown. Dietrich is also a Pulitzer Prize-winning journalist, historian, and naturalist. A winner of the PNBA Award for Nonfiction, he lives in Washington State.

3.9 out of 5 stars
3.9 out of 5
144 global ratings
How are ratings calculated?
To calculate the overall star rating and percentage breakdown by star, we don’t use a simple average. Instead, our system considers things like how recent a review is and if the reviewer bought the item on Amazon. It also analyses reviews to verify trustworthiness.

Kenneth F. Mcara
4.0 out of 5 stars Raiders of the lost scrolls
Reviewed in the United Kingdom on 15 January 2012
Verified Purchase
For the first 48% or so of this book (according to my Kindle) this was pretty hard work. I didn't like the protagonist particularly, he seemed virtually indestructible - escaping from all tight corners in the equivalent of a single bound - and there was far, FAR too much chat. However, this picked up in the second half, although there was still far too much theorising for a book of this "rollicking adventure" type. Dietrich has certainly done his homework on the pyramids, as well as certain aspects of mathematics, but he can't help himself telling us more than we need to keep the tale moving.

And this is a classic quest to find something important/secret/significant... Think

Indiana Jones - Raiders Of The Lost Ark - Special Edition [DVD ] crossed with  National Treasure [DVD] [2004 ] and  Sahara [DVD ] set a couple of centuries ago. The 'McGuffin' is a seemingly ordinary medallion, which turns out to be the key to secrets which have not been seen for millennia. Everyone wants it and yet Ethan Gage, ordinary all-American boy, crack-shot, tomahawk wielder and erstwhile sidekick of Benjamin Franklin (no less) becomes its guardian and takes it with him, accompanying Napoleon on his invasion of Egypt.

Whilst you may eventually have to suspend your disbelief a little too far (keeping track of the number of famous people Gage just happens to bump into and leave with a favourable impression, for example) there's a pretty good time to be had here in this slick page-turner. Lots of gratuitous sex and violence too, which is slightly out-of-keeping with the 'Boy's Own' tone of the rest of the book.

If you just can't wait for more of the same, the ending sets us up for the sequel -

The Rosetta Key (Ethan Gage 2)  - and there is yet another adventure which follows this,  The Dakota Cipher (Ethan Gage 3) .
Read more
One person found this helpful
Report abuse

Charles Green
4.0 out of 5 stars An Enjoyable Historical Romp
Reviewed in the United Kingdom on 10 August 2011
Verified Purchase
Back when it was first published I'd dismissed Napoleon's Pyramids as yet another 'hunt the lost artefact' adventure riding Dan Brown's coat tails and as a consequence avoided it. It turns out that initial judgement was completely unfair (although in my defense it was marketed as being a Brown-esque adventure); Napoleon's Pyramids has absolutely nothing in common with The Da Vinci Code, Angels & Demons or any other Brown potboiler.

For a start this is an outright period adventure. There's no contemporary plot or mere flashbacks to the past; from page 1 to the end the entire story is set in the 18th Century around Napoleon's invasion of Egypt, and it does a grand job of bringing both the period and the invasion to life. William Dietrich, a journalist, is both a gifted writer and a solid researcher. Napoleon's Pyramids is full of wonderful descriptive passages that evoke both Revolutionary France and pre-Colonial Egypt brilliantly, and solid factual detail regarding Napoleon's military escapades and the real-life characters caught up in them.

Around the evocative prose and various true events Dietrich then manages to weave a highly entertaining adventure story that both holds the reader's attention and keeps piling on the twists and surprises right up to the very end. In Ethan Gage he has created an affable, relatable hero; flawed but competent, tough but not super-human. The author also wisely avoids burdening Gage with unnecessary emotional baggage. This is a romp, and as such doesn't demand a tortured hero. Gage might be prone to self-doubt and have something of the rogue about him, but that's as far as any 'edge' goes. On the whole he remains a jocular, upbeat figure.

Many of the other characters are real life individuals, and they are generally well portrayed. The same could be said, but with some reservations, to go for the fictional supporting characters Dietrich inserts into the story. Dietrich certainly provides most of them with enough depth to satisfy the needs of the story.

The mystery that Gage gets caught up in is a pretty standard 'hunt the lost treasure using clues on ancient artefacts' affair, but Dietrich avoids too many cliches (or at least manages to make them feel reasonably fresh) and keeps the story moving and generally exciting. It also remains vaguely within the realms of plausibility and keeps you guessing as to the eventual outcome right up until the final few chapters. Action is frequent and varied, from chases on foot, to break-ins to mass battles on land and sea. Dietrich handles this side of things with aplomb, keeping events clear and dynamic.

If there are significant weaknesses they relate to the book's pacing and some characterisation. In the case of the former Dietrich encounters a problem that is common to many authors who try to hang a fictional plot on true events; that reality doesn't always unfold at a dramatically satisfying pace. Whilst Napoleon's invasion of Egypt included several great and exciting land and sea battles there was also quite a lot of hanging around time too. This results in Dietrich having to add some padding around the book's middle section to keep pace with events as they actually unfolded, which robs the story of some of its momentum.

In terms of characterisation having Gage act as narrator does have some negative impacts. The two key bad guys never really develop into more than sneering, moustache twirling matinee villains, a feeling exascerbated by the cliche that one is the outwardly respectable, haughty, aristocratic brains behind the operation and the other the swarthy local muscle. The good guys come off a little better, but still lack a bit of depth. A mutual love affair for example, feels under-developed as Gage as a character lacks the self-awareness necessary to identify his changing feelings and the first-person narration denies us woman's perspective entirely. Although the affair is signposted early on when it eventually blossoms it seems to do so from nowhere, rather than developing naturally and gradually.

Overall however, Napoleon's Pyramids is a consistently entertaining historical adventure than remembers that such things should, above all, be fun. By the time I reached its open ending I was very keen to pick up the follow-up Ethan Gage adventure
The Rosetta Key (Ethan Gage 2) , which suggests that William Dietrich must have done something right.
Read more
One person found this helpful
Report abuse

Roger Cave
4.0 out of 5 stars Historical Action Adventure
Reviewed in the United Kingdom on 10 September 2011
Verified Purchase
I think someone said this is like Indiana Jones, set with a Napoleonic backdrop, and that would be a fair summing up of the plot.

Set in the lat 1790s the main character, and American, Ethan Gage, gets himself in a little trouble in post revolution France and joins Napoleon's expedition to Egypt as a savant.

As always there's a mysterious object in the mix, which has fallen into Gage's possession, and other people want it in the belief it will anoint them with mythical powers to be found in Egypt.

Gage, therefore, joins the expedition, finds himself in loads of trouble, makes friends and enemies along the way, and has to balance his desires with the safety of those around him.

It's historically accurate, it's tremendous fun in places and balances action with the historical events very well. On the downside, it was a little long, and Gage seems to have more lives than a cat, but surely that's the joy of such a book.

If you're looking for an historical romp, with loads of action, where the hero has to save the girl and the day, then look no further. The question is, does he manage it?
Read more
Report abuse

Jeremy F. J. Simpson
5.0 out of 5 stars A great read for history buffs
Reviewed in the United Kingdom on 10 April 2015
Verified Purchase
A delightful and informative novel that had me checking reference books to confirm that there were real events that formed the basis of this story. A bounder of a hero for whom one has a sneaking admiration and a wonderful female companion!
Read more
Report abuse

trishagriffiths
4.0 out of 5 stars if you like adventure these books are for you
Reviewed in the United Kingdom on 7 March 2015
Verified Purchase
I found the 3rd book of this series in a pound shop, they are very informative books,
so purchased the two previous books, if you like adventure these books are for you.
Read more
Report abuse
See all reviews
Get FREE delivery with Amazon Prime
Prime members enjoy FREE Delivery and exclusive access to movies, TV shows, music, Kindle e-books, Twitch Prime, and more.
> Get Started
Back to top
Get to Know Us
Make Money with Us
Let Us Help You
And don't forget:
© 1996-2020, Amazon.com, Inc. or its affiliates