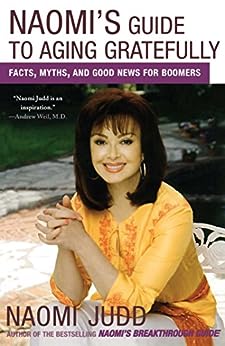 by Naomi Judd (Author) Format: Kindle Edition
See all formats and editions
Sorry, there was a problem loading this page. Try again.
Naomi Judd has been called "The Face of the Boomer Generation." At 78 million strong, boomers have become America's largest demographic. In Naomi's Guide to Aging Gratefully, she debunks society's harmful myths about aging and finds more meaningful ways we can define ourselves so we can enjoy (rather than dread) getting older.

Freedom is the focus, and there's no better time than now to free yourself from untrue and outdated ideas about your own potential. Naomi is full of fresh ideas to help readers look at their futures in a whole new way. The aging process, as Naomi shows, is an opportunity for new experiences, original routines, and more contentment than ever before.

Naomi offers tips on finding simplicity, streamlining possessions, disengaging from "energy vampires," and discovering the most effective ways to support your life force and boost your energy. Each chapter includes vital new health information and proactive lifestyle suggestions for your body, mind, and spirit. Naomi has a solution-oriented approach to everything from beauty tips to getting in sync hormonally with bioidentical HRT. She also offers wisdom on dealing with grief as well as enlightening ideas on how to recognize and enjoy your own uniqueness no matter how old you are.

Packed with personal anecdotes, commentary from celebrity friends and data from renowned doctors, and plenty of Naomi's own special brand of lemonade-out-of-lemons wit and wisdom, Naomi's Guide to Aging Gratefully encourages readers to believe that it's never too early or too late to enter an important new chapter in their lives and embrace opportunities to become their happiest ever.
Read more
Previous page
Next page
Kindle e-Readers
Kindle Fire Tablets
Free Kindle Reading Apps
See all supported devices

"From Kentucky to Hollywood to Nashville, Naomi Judd has used her indomitable spirit to transcend hardship and create breakthroughs in her life, first in the music business and later in her health.... What an inspiration!" -- Mona Lisa Schulz, M.D., Ph.D., neuropsychiatrist, medical intuitive, author of "The New Feminine Brain" --This text refers to an alternate kindle_edition edition.

Naomi Judd, a country music superstar as well as one of the most admired women in the entertainment industry, has sold more than twenty million albums and won six Grammys and American Music Awards. She's received three honorary doctorates in the arts and nursing and is a highly sought after speaker. As a humanitarian and social advocate, she is the spokesperson for the American Liver Foundation. Author of two bestsellers, Naomi's Breakthrough Guide and Love Can Build a Bridge, she has also written three children's books and Naomi's Home Companion, a collection of recipes and kitchen-table wisdom. Her skin care line Esteem can be found at www.mynaomi.com.

Naomi is also the host of her own TV show, Naomi's New Morning, which airs on Sundays on the Hallmark Channel.

She lives with her husband, Larry Strickland, outside of Nashville, Tennessee, on a farm called Peaceful Valley, which she shares with her daughters Wynonna and Ashley and their families.

Visit her website at www.Naomijudd.com --This text refers to an alternate kindle_edition edition.

Amazon Customer
5.0 out of 5 stars Five Stars
Reviewed in the United States on 8 March 2017
Verified Purchase
Excellent.........and thank you for the careful packaging to keep in like new
Read more
Report abuse

Trisha H.
5.0 out of 5 stars Aging gracefully
Reviewed in the United States on 2 April 2013
Verified Purchase
This was an excellent book, very informative, and very well written. I recommend this book to anyone wanting to improve his/her life as well as move ahead and age with grace!!!
Read more
One person found this helpful
Report abuse
See all reviews
Back to top
Get to Know Us
Make Money with Us
Let Us Help You
And don't forget:
© 1996-2021, Amazon.com, Inc. or its affiliates