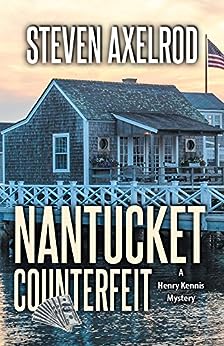 by Steven Axelrod (Author) Format: Kindle Edition
See all formats and editions
Sorry, there was a problem loading this page. Try again.

Horst Refn, the widely disliked and resented Artistic Director of the Nantucket Theater Lab, has been found stuffed into the meat freezer in his basement. Most of the actors, all the technical crew, and quite a few of the Theater Lab Board members, whom Refn was scamming and blackmailing, are suspects in his murder. The island's Police Chief Henry Kennis has to pick his way through a social minefield as he searches for the killer.

At the same time, daughter's new boyfriend, football star Hector Cruz, has been accused of sexting her. Carrie knows the offending pictures didn't come from him, and Henry has to prove it before the boy gets suspended, which means probing into the family secrets of Hector's father, a firebrand agitprop playwright, who happens to be a prime suspect in Refn's murder.

Every story is a fiction, every identity proves false, and every statement a lie. The counterfeit bills found at the scene of the crime are the most obvious symbol of the deceptions and distractions that obscure the investigation. The truth lies buried in the past, in Refn's earlier crimes and the victims who came to Nantucket seeking revenge.

When the culprit has been revealed, the last masks torn off, and final murder foiled—live, on stage, during the opening night of Who Dun It, the eerily prescient opening drama of the Theater Lab Season—Jane says to Henry, "Is everything counterfeit?" He smiles. "Almost."

The fifth in Axelrod's clever series casts a cynical eye on Nantucket's decidedly diverse denizens. Only the most careful readers, undistracted by his satire, will figure out whodunit. - Kirkus Reviews

The narrative flows along at a good clip, with eddies of philosophy and humor. The witty dialogue perfectly matches the multifaceted characters. That Henry believes in an 'old school low-tech version of police work' allows the reader to readily follow the clues. - Publishers Weekly --This text refers to the paperback edition.

Steven Axelrod holds an MFA in writing from Vermont College of Fine Arts and remains a member of the WGA despite a long absence from Hollywood. His work has been featured on various websites, including the literary e-zine Numéro Cinq, where he is on the masthead; Salon.com; and The Good Men Project; as well as the magazines Pulp Modern and Big Pulp.

A father of two, he lives on Nantucket Island, Massachusetts, where he paints houses and writes.

Thomas D.Rath
4.0 out of 5 stars Good read
Reviewed in the United States on 19 March 2019
Verified Purchase
Ok. About B+. You had to have read earlier ones to get all of this. But pretty good story and good characters and geography Read it with a pad next to you to keep track of characters. Excellent last 50 pages or so
Read more
Report abuse

Susannah Nolden
5.0 out of 5 stars best yet
Reviewed in the United States on 12 November 2019
Verified Purchase
intriqing
Read more
Report abuse
See all reviews
Back to top
Get to Know Us
Make Money with Us
Let Us Help You
And don't forget:
© 1996-2021, Amazon.com, Inc. or its affiliates