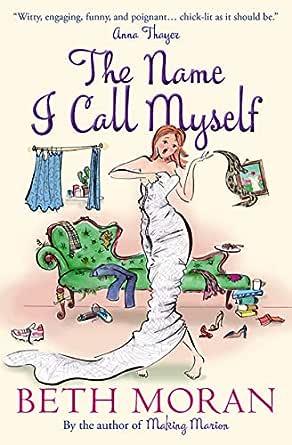 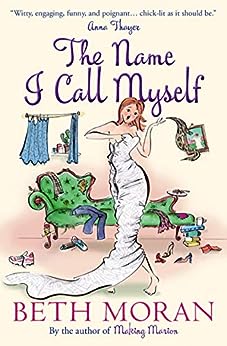 The Name I Call Myself Kindle Edition

Beth Moran has a background as a research scientist and adult educator. She is now part of the national leadership team of the women's network Free Range Chicks. She is married with three children and lives in Calverton, Nottingham.

Iola
TOP 500 REVIEWER
5.0 out of 5 stars Beth Moran gets better and better
Reviewed in Australia on 15 September 2016
Beth Moran is an English Christian author. The Name I Call Myself is her third novel, following Making Marion and I Hope You Dance. If you’ve read either of those and didn’t like them for any reason, then I doubt you’ll enjoy The Name I Call Myself, so you can skip this review. But if you liked them or haven’t read them, read on.

I will admit I found The Name I Call Myself a little difficult to get in to. It had a lot of similarities to her previous novels, in that it centres around a young woman discovering her true self. This isn’t helped by some early scenes which reminded me of Bridget Jones at her least intelligent. Faith isn’t an easy character to get to know (even though the book is written in first person). But once we get past the awkwardness that is Faith’s engagement party, the novel really picked up both pace and interest.

Faith is a complex character.
She was raised by her grandmother (now dead) and her older brother, Sam, after their mother was murdered by her partner … as Sam watched. That experience drove the teenage Sam down a trail of alcohol, drugs and mental illness. And he’s never recovered. It left Faith with … well, ‘issues’ almost begins to describe it. She is a very private person, and it takes a long time before I understood enough of her history to really understand the reason she didn’t share a lot.

The Faith perhaps not even Faith knows.
Yes, there are touches of romance, of comedy and of suspense. But The Name I Call Myself is really about Faith’s search for love, acceptance and identity, a search many of us can relate to.

Recommended for fans of contemporary Christian fiction with an edge.

Thanks to Lion Fiction and NetGalley for providing a free ebook for review.

Paula Vince
4.0 out of 5 stars Some serious topics
Reviewed in Australia on 13 September 2016
My biggest take-away from this novel is that our experiences are grained into the fabric of our personalities. Even with a wealthy fiance, new car and the offer of limitless financial support, Faith still thinks with the battler's perspective and insists on working hard to look after herself. It's easy to understand, when you consider the gradual revelation of all she's been through. It's quite fascinating. She's planning to marry a millionaire, but still has a broke person's mindset. Overall, Faith comes across with a strong sense of her own personhood, which she never compromises or allows to be violated. It makes her an admirable main character.

Beth Moran's writing style is fantastic. She knows how to play with a reader's emotions using a good blend of humour and pathos. She also has a way of making every character well-rounded and three-dimensional, including those with cameo roles. Each of the ladies in the choir stands out as individuals.

The heart and wisdom of Hester the choir director, is one of the good parts of the story. She wants the ladies to develop such a loving bond that they support each other like a single organism, and convinces them that they must believe the best of themselves before they can expect their singing performance or lives to get any better. I liked her creative schemes to get them out of their comfort zones. Bonding happened, as Hester hoped, but on a few occasions some serious accidents were narrowly avoided. At those times, she came across a bit like an unqualified, self-appointed counselor who took huge decisions on herself. She was lucky they didn't turn out any worse.

The progression of Faith's romantic dilemma was interesting. Although it's pretty clear from the start that Dylan, the rugged pastor, is marked to be the hero, it was looking like she could've easily gone with Perry. He wasn't an anti-hero. In fact, I think it's to his credit that he turned out as nice a guy as he was, having been brought up by his snobby, overbearing mother. Perry was a product of his upbringing and circumstances, just as Faith and Sam were of theirs. Parts of the story seemed a bit rough on him, but I think he had a narrow escape too, since he could have ended up with a woman who wasn't in love with him and could never share his view of the world. He should have got out earlier, since there were many alarm bells. For example, she never said, 'I love you.' They probably could never have really been a good match, since their world outlooks were poles apart from childhood.

I think many readers who enjoy the 'One true love and you'll know when it hits you,' ideal will enjoy this book. It shows even big girls aren't too old for fairy tales, which sometimes do come true. Hey, I'm not sure if it's ever fully revealed why Dylan was still single. He said he'd explain one day, but did he ever?

I'll try not to drop plot spoilers, but I decided to take one star off because although the writing is top-notch, some of the events of the plot left me horrified. I found one part of the story to be the emotional equivalent of a whack in the guts. It's most disturbing because the characters concerned are forewarned in plenty of time and do all they can to take precautions, calling on people who ought to be equipped to help, yet the situation still turns out just as they'd feared. That creeps me out. It was like a nightmare, which doesn't say much for the help we can expect from our society (or God, some readers may add).

Sure, plenty of novels reflect the devastating turns life may take, but I thought it a bit unfair to the reader that this turns out to be one of them, because we were lulled into a sense of security. The cheery front cover design and some of the hilarious happenings early on lead me to expect for certain that this particular plot thread would be cleared up okay. Especially since the characters were doing all the right things. When I got to that stage, all I could do was gulp and say, 'I really didn't think she'd take it there.' It's just one of the hazards of the adventure of reading, I guess.

Amazon Customer
5.0 out of 5 stars Heartily recommend.
Reviewed in the United Kingdom on 16 August 2017
Verified Purchase
Really enjoyed reading this book - it is a holiday read but also deals with very real and deep issues of identity and friendship and love. Would absolutely recommend it.
Read more
Helpful
Sending feedback...
Thank you for your feedback.
Sorry, we failed to record your vote. Please try again
Report abuse

Dawn N
5.0 out of 5 stars Worth reading.
Reviewed in the United Kingdom on 26 October 2016
Verified Purchase
I liked this book. It was recommended in a recent magazine, so I thought I'd try it. A very good read, I couldn't put it down.
Read more
Helpful
Sending feedback...
Thank you for your feedback.
Sorry, we failed to record your vote. Please try again
Report abuse

D. C. A. Price
4.0 out of 5 stars Four stars with a few reservations!
Reviewed in the United Kingdom on 10 December 2017
Verified Purchase
As a Christian myself i’m afraid I find most books from Christian authors difficult to enjoy. They seem either to loudly preach at you, or are very twee. I like that Beth Moran manages to tell a mostly believable story, though i’ve sung in choirs all my life, large ones and small intimate ones, and find it hard to believe they go on survival weekends together and other extreme “bonding” activities. Sadly the choir didn’t quite ring true to me, nor the fact that Rachel was quite so selfish in regard to Perry. But I always like a book that doesn’t portray a minister or vicar as a bumbling fool or hypocrite so bonus brownie points for that, and also portrays a congregation as loving and supportive but also fallible human beings! This at times was a rather bleak book, but Moran’s style of writing prevents it from becoming depressing. Difficult issues raised in this book so definitely not your average chick lit.
Read more
One person found this helpful
Helpful
Sending feedback...
Thank you for your feedback.
Sorry, we failed to record your vote. Please try again
Report abuse