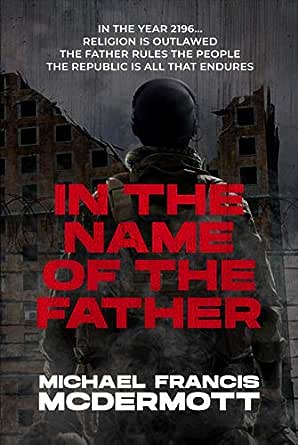 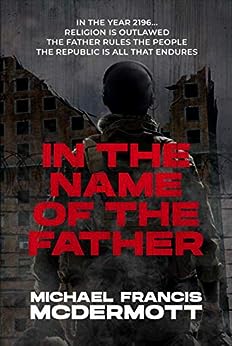 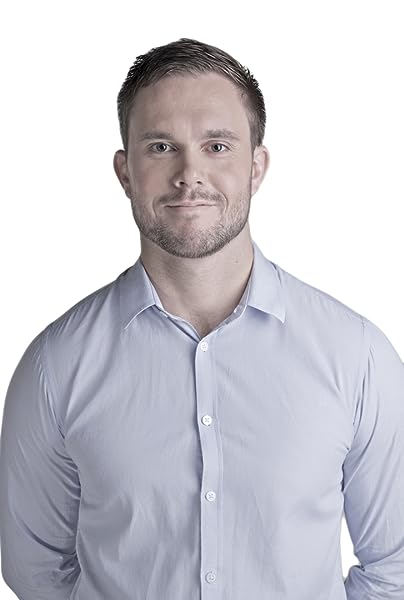 In the Name of the Father: A Dystopian Series (Books 1-4, Box Set) Kindle Edition

Sarah
5.0 out of 5 stars A Great Read
Reviewed in Australia on 3 May 2020
Verified Purchase
A fantastic read!
I loved how there was so much detail in all the characters and they were really well thought out.
I loved the how we got the different perspectives and I was even able the empathize with the “bad guys”.
The different theories and theology was really intriguing, and I felt the author covered all the different ideals each character had very thoroughly.
The way it was all brought together at the end, was exceptional and I even had a tear in my eye!
As a first published work - it’s just brilliant!
Read more
One person found this helpful
Helpful
Report abuse

Dany M Hatem
5.0 out of 5 stars I couldn't put it down. Great read!
Reviewed in Australia on 5 December 2020
Verified Purchase
Book Review: ‘In the Name of the Father’
By Michael Francis McDermott.

A gripping and powerful dystopian novel that managed to surpass my high expectations and kept me guessing from start to finish. Any plot summary will be inadequate, but here it goes: the reader is led and then absorbed into the journey of the protagonist in the story, Heath, a rebel to the Republic, and his fight for freedom and salvation from the regime that killed his parents and took away his friends.

Multiple storylines are layered strategically and complex matters of religion, politics, family structures and relationships, love, and the exploration of the human spirit are made easy to understand as all are intertwined with a fluidity of writing hardly seen by a debut author. This epic story successfully weaves relevant current issues into a future society which also draws upon the history of our civilisation. A battle of old world versus new, with equally heart-warming characters versus their adversaries, I was surprised to see myself drawn to various parts of many of these character’s psyches. It is thought-provoking in its intensity and philosophical undertones, I loved it thoroughly, both storyline and the characters.

If you love yourself a literary thriller, this is the novel for you.
Read more
Helpful
Report abuse

Jennifer Cameron-Smith
TOP 10 REVIEWER
4.0 out of 5 stars ‘Perfect. In the Republic, there is only what is allowed, and what is not.’
Reviewed in Australia on 17 April 2020
2196. A new world, in which the Republic is the sole surviving state. The Father is the ruler, the Law is immutable, religion is banned. Those who are citizens of the Republic are protected from the lawless sectors outside by electric fences. Some of those who live outside conduct raids across the fence for supplies.

‘Freedom was a thing of the old world, a thing that had died with the ancient communities during the last conflicts, but it was a concept that wasn’t forgotten.’

In this epic dystopian tale, five different characters tell the story. The good, the bad, the ugly, the impressionable and the exploited. It’s a long, complex story with backstory provided in part as history lessons and the occasional soliloquy. BUT there is a lot of violence. Unnecessarily graphic violence at times, in my view. I am not squeamish, but I certainly didn’t need all the detail of torture and rape sometimes provided. I get it. I worked out who the bad guys were, I don’t need to have frequent reinforcement of their badness.

I’m frequently in the mood these days for dystopian fiction, and I found a lot to like in Mr McDermott’s story. I just wish it was less believable. There’s hope here, as well as violence, love as well as hate. Can the heroes build a new and better world? I hope so.

Recommended, but not for the squeamish.

Note: My thanks to NetGalley and Hemisphere Publishing for providing me with a free electronic copy of this book for review purposes.

Ivory Castle
TOP 1000 REVIEWER
4.0 out of 5 stars Worlds might change but people will always want power over others
Reviewed in Australia on 15 June 2020
Imagine a world where the law means order, stability, complete unity and obedience to the same set of rules without exception. Religion is outlawed and the Father rules the citizens living in the Republic.
The main characters include the following. Slinky leads the Freedom Fighters on raids to stop the citizens from making the mistakes of the old world and help eradicate rebels. Ever since her childhood she has wanted to hunt the insane and eradicate the old beliefs. Employed by the Republic she keeps a dark secret. Heath leads the rebels on raids from the Grey Zone into the Republic for much needed medications for their people. Although young he is dedicated to helping the people attain freedom again. Timothy is a young boy with a heart condition living and attending classes in the Republic.
I started out thinking this wasn’t the sort of book I would normally read then felt a compulsion to follow through to the end. A little slow in parts, others felt a like a lesson with tense breath holding material thrown in.
I felt like there was some truth in this story and it wasn’t hard to imagine the same situations happening in the future. Seems to me worlds might change but people will always want power over others.
Top marks for a first time dystopian thriller. I particularly enjoyed the parts involving the Extraction Centre.
Thank you to Netgalley and the publisher for a free digital copy of the book in return for an honest review.
Read more
Helpful
Report abuse

Stephanie Cappas
5.0 out of 5 stars Thought provoking, thrilling!
Reviewed in Australia on 19 December 2020
As I had never really taken to reading books in this genre I was surprised as to how much I LOVED this series! It was a bit slow to start and took me a while to get to know and understand all the characters. This ended up being worth it as the characters had so much depth and complexity to them. I was fully immersed in their world and emotionally invested in the characters. The way everything tied together in the end was very clever and I loved all the twists and turns along the way. The writer portrayed a world that was quite violent at times, shocking, as well as one that showed deep love, loyalty and hope - there was no holding back on any of these themes and I feel it captures mankind's darkness and light perfectly.
An incredibly thought provoking, exciting book that I highly recommend.
Read more
Helpful
Report abuse
See all reviews
Get FREE delivery with Amazon Prime
Prime members enjoy FREE Delivery and exclusive access to movies, TV shows, music, Kindle e-books, Twitch Prime, and more.
> Get Started
Back to top
Get to Know Us
Make Money with Us
Let Us Help You
And don't forget:
© 1996-2020, Amazon.com, Inc. or its affiliates