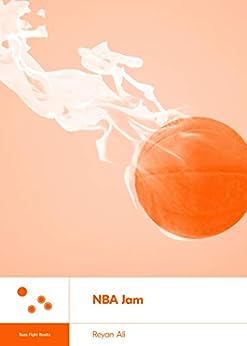 Reyan Ali is a writer from Columbus, Ohio. He's been published by Wired, Rolling Stone, Spin, The Atlantic, Pacific Standard, and alt-weekly papers across the country. Born in Dallas, he grew up in Karachi, Pakistan, where he soaked up 1990s NBA action almost exclusively through trading cards, Beckett Basketball back issues, and NBA Jam: Tournament Edition on the Sega Mega Drive. His first writing gig was contributing to the Mortal Kombat Netherealm (MKNe), a fan site long lost to time. --This text refers to the paperback edition.

4.9 out of 5 stars
4.9 out of 5
112 global ratings
How are ratings calculated?
To calculate the overall star rating and percentage breakdown by star, we don’t use a simple average. Instead, our system considers things like how recent a review is and if the reviewer bought the item on Amazon. It also analyses reviews to verify trustworthiness.

Blair P Farrell
5.0 out of 5 stars Check your mail, you might just find something that's heating up!
Reviewed in Canada on 2 January 2020
Verified Purchase
I started my journey into Boss Fight Books' catalog late last year, and of the titles I've read, NBA Jam is up there with the best, if not the best book I've read from Boss Fight. An amazingly crafted tale that spotlights the rise and fall of the North American arcade industry, as well as Midway, without ever losing focus that the text is celebrating one of the most beloved arcade sports games of all time. I said on social media that this should get turned into a mini-series, and I stand by that.
Read more
Report abuse

Chris
5.0 out of 5 stars This book is “ON FIRE!”
Reviewed in Japan on 1 July 2020
Verified Purchase
A very fun and entertaining read, with exclusive interviews that talk about the development of the game, a look inside Midway, and most important, nostalgia. I dislike reading, but I couldn’t put this one down; the author keeps it interesting throughout!
Read more
Report abuse

MitchellTR
5.0 out of 5 stars Boss Fight Has Leveled Up
Reviewed in the United States on 24 October 2019
Verified Purchase
Boss Fight books has an incredible collection of thoughtful books that captures the story behind iconic games, but NBA Jam has taken the series to new heights. Reyan was an accomplished journalist before he tackled the project and the quality of the interviews and research that went into the book is unbelievable. Nearly every sentence in the book reveals something that will surprise even the most dedicated fans of the game. We finally have the definitive story of NBA Jam.
Read more
6 people found this helpful
Report abuse

CheCarlos
5.0 out of 5 stars An Instant Classic in Video Game History
Reviewed in the United States on 10 July 2020
Verified Purchase
Boss Fight Books has come a long way since their half-hearted Earthbound debut. I had given up on them way back then, but then I saw the reviews for their NBA Jam book, and I felt I had to check it out. I'm glad I made that choice. Reyan Ali's treatise on the history of NBA Jam is sure to become a classic in the literature of Video Game History.

With a clear, concise, and focused prose that flows smoothly and takes us on a journey through the 90s, Ali's NBA Jam is a pretty near-perfect book. Through the history of NBA Jam, we also learn about the origin of sports video games as a genre, the golden era of the coin-op arcade game, and the rise and fall of Midway and Acclaim. I never knew all these histories were all so closely intertwined, and that is perhaps the most valuable insight that Ali provides in his book. NBA Jam was much more than a hit: it was a juggernaut that launched two companies to unbelievable heights from which they would both come crashing down once the Jam craze came to an end.

All the chapters feel focused and none of them are superfluous, which makes for a wonderful read that I ended up binging on once I reached the latter half. The only negative I found is that there are quite a bit of proofreading errors here and there (mostly repeated words, or missing words, or words left over from a previous idea for a sentence that was then changed); they're not enough for me to dock a star off the score, but it's definitely a shame that such an essential book has a notable amount of minor mistakes. One more proofreading would have no doubt solved the issue.

If you like reading about video game history and/or if you're interested in documentary-style books on video games, NBA Jam is a must-read volume and a wonderful proof of redemption for Boss Fight Books.
Read more
One person found this helpful
Report abuse
See all reviews
Back to top
Get to Know Us
Make Money with Us
Let Us Help You
And don't forget:
© 1996-2021, Amazon.com, Inc. or its affiliates