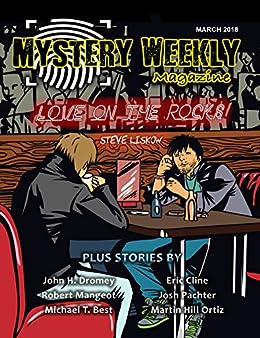 
The stories we feature in our monthly issues span every imaginable subgenre, including cozy, police procedural, noir, whodunit, supernatural, hardboiled, humor, and historical mysteries. Evocative writing and a compelling story are the only certainty.


Get ready to be surprised, challenged, and entertained--whether you enjoy the style of the Golden Age of mystery (e.g., Agatha Christie, Arthur Conan Doyle), the glorious pulp digests of the early twentieth century (e.g., Dashiell Hammett, Raymond Chandler), or contemporary masters of mystery.


"Love on the Rocks," by Steve Liskow
While tending bar, Karin reads the lips of two men planning a murder. She's never seen them before and nobody else heard them, so how can she stop them before someone dies?


"The Woman Who Sat on a House," by John H. Dromey
While she was housesitting for a friend in an unfamiliar neighborhood, people-watching seemed like a perfectly harmless pastime for an amateur sleuth. Then something untoward happened next door.


"Bill Postesr Will Be Prosecuted," by Josh Pachter
A Christmas trip to London turns bleak for William and Evangeline Posters.


"Bag Man," by Martin Hill Ortiz
An ambulance crew is summoned to a lonely street where they find a bullet-ridden ambulance. There, they find a dying man with a large stash of money.


"Queen and Country," by Robert Mangeot
An ultra-valuable tropical spider has popped up in the French badlands, where no tropical spider should ever survive. Legend-in-his-own-mind arachnologist Nick Torthwaite is on the hunt. He’s out of his element, too.


"The Lexicon Case," by Michael T. Best
An investigator goes undercover to discover why four ex-employees of the Lexicon Corporation committed crimes they do not remember committing.


"Low Budget Mystery Story," by Eric Cline
Talk is cheap, but stories are expensive. Our tale won't last long, and neither will its protagonist.

T. J. Barlow
5.0 out of 5 stars Some fine fiction herein
Reviewed in the United States on 15 April 2018
Verified Purchase
Clever stories, including some that play delightfully with the genre cliches. Eric Cline's was particularly noteworthy. Give it a try
Read more
2 people found this helpful
Report abuse

John O. Adams
5.0 out of 5 stars Intriguing!
Reviewed in the United States on 1 June 2018
Verified Purchase
The mysteries kept me guessing. They were easy to solve. A lot of the stories had funny plot twists.
Read more
Report abuse
See all reviews
Back to top
Get to Know Us
Make Money with Us
Let Us Help You
And don't forget:
© 1996-2021, Amazon.com, Inc. or its affiliates