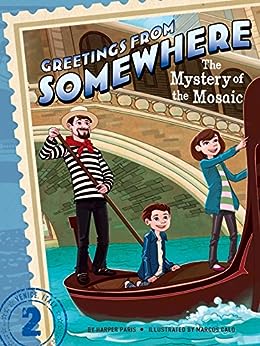 Harper Paris loves to travel. Her favorite cities in the world are Paris (like her name!) and New York City. She has collected many souvenirs on her travels, including a good-luck coin from Japan and a reindeer-horn pendant from Sweden. She also loves mysteries. When she was a kid, she read Hardy Boys and Nancy Drew books after bedtime with a flashlight. She now lives with her family (including two cats and a bunny, who are not good travelers) in Ithaca, New York.

Marcos Calo has worked as a professional artist for more than fourteen years. He has worked in different fields including illustration, animation, and comic books. He lives with his wife and daughter in A Coruña, a small Spanish town by the seaside. --This text refers to the paperback edition.

The Mystery of the Mosaic

Venice was made up of a bunch of tiny islands connected by canals and bridges. The canals were like streets, except filled with water. So some people were using boats to get around, and others were walking over the bridges from one little street to another!

The Briar family had traveled by water taxi from the airport. The sleek motorboat pulled up to a cream-colored building with lots of balconies.

Their dad, Andrew, pushed his glasses up on his nose and pointed to his guidebook. “It says here that the Pensione Mistero is one of the oldest hotels in Venice.”

“Is it older than you guys?” Ella asked with a sneaky smile.

Mr. Briar laughed. “I should hope so. It was built more than eight hundred years ago.”

The four of them stepped out of the boat with their suitcases. Pink, yellow, and pale green buildings lined both sides of the canal. Pretty flowers and vines filled the window boxes. There were no cars or bicycles on the cobblestone streets, only people walking. --This text refers to the paperback edition.

Rachel Webb
5.0 out of 5 stars Best book EVER!
Reviewed in the United Kingdom on 6 May 2015
Verified Purchase
This book was great fun and very exciting as it includes lots of suspects. I loved it and now I have bought two more : the mystery of the missing painting and the mystery of the gold coin as well as this one. I hope these are just as good!
Read more
One person found this helpful
Report abuse

Josep Busquets
5.0 out of 5 stars A good choice
Reviewed in the United Kingdom on 23 August 2015
Verified Purchase
A very good story; easy for 10 year old even if English is not their native language; ideal to read before you take your kids to Venice
Read more
One person found this helpful
Report abuse

Kathleen
3.0 out of 5 stars Better than the first
Reviewed in Canada on 4 July 2019
Verified Purchase
Simple to read but a bit dull
Read more
Report abuse

Rani Varde
4.0 out of 5 stars Four Stars
Reviewed in India on 2 April 2015
Verified Purchase
My 6 year old enjoyed reading this series.
Read more
Report abuse
See all reviews
Back to top
Get to Know Us
Make Money with Us
Let Us Help You
And don't forget:
© 1996-2021, Amazon.com, Inc. or its affiliates