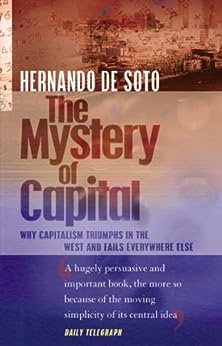 The Mystery Of Capital Kindle Edition

Hernando de Soto is President of the Institute for Liberty and Democracy (ILD), headquartered in Lima, Peru. He was named one of the five leading Latin American innovators of the century by Time magazine in its May 1999 issue on "Leaders for the New Millennium." De Soto played an integral role in the modernization of Peru's economic and political system as President Alberto Fujimori's Personal Representative and Principal Adviser. His previous book, The Other Path, was a best seller throughout Latin America and the U.S. He and ILD are currently working on the practical implementation of the measures for bringing the poor into the economic mainstream introduced in The Mystery of Capital. He lives in Lima, Peru. --This text refers to an out of print or unavailable edition of this title.

"If a nonmathematician can win a Nobel Prize in Economics, I nominate de Soto."--Lawrence Minard, Forbes Global

"In his smart new book, The Mystery of Capital, de Soto answers the question why capitalism succeeds in the West and fails in so many other places."--Thomas Friedman, New York Times

"Some books are good, some are bad, but very few are real gems. One of the few gems is the recently published book, The Mystery of Capital."--Thomas Sowell, -

"The blueprint for a new industrial revolution."--The Times (London)

"The most intelligent book yet written about the current challenge of establishing capitalism in the developing world."--Economist --This text refers to an alternate kindle_edition edition.

Why does capitalism triumph in the West but fail almost everywhere else? Elegantly, and with rare clarity, Hernando de Soto revolutionizes our understanding of what capital is and why it does not benefit five-sixths of mankind. He also proposes a solution: enabling the poor to turn the vast assets they possess into wealth. --This text refers to an alternate kindle_edition edition.

Beautifully and clearly written, this is a radical solution to the failure of capitalism in four-fifths of the world. --This text refers to an alternate kindle_edition edition.
Read more

4.6 out of 5 stars
4.6 out of 5
251 global ratings
How are ratings calculated?
To calculate the overall star rating and percentage breakdown by star, we don’t use a simple average. Instead, our system considers things like how recent a review is and if the reviewer bought the item on Amazon. It also analyses reviews to verify trustworthiness.

San Patch
4.0 out of 5 stars Beyond 'left vs. right' Economics
Reviewed in the United Kingdom on 30 April 2009
Verified Purchase
We all know that free markets, which deliver the latest Harry Potter novel within three days to any location in the world, only work in the West. What's more, popular culture tells us that the reason why the free market does not work in benighted places like Uganda is due to a number of simplistic explanations: Culture - the people are lazy, while we in the West have a Christian ethic of hard work; Religion - Third Worlders are still stuck with mysterious religions right out of Conrad's heart of darkness and finally; Third Worlders are `content' with their lot in life. Thankfully, Hernando de Soto's Mystery of Capital presents a more plausible reason for the failure of capitalism outside the West: the lack of property rights in the Third World.

De Soto's premise is that widely accessible legal property systems are the foundation of the West's prosperity and that the absence of such systems in Third World countries is the principal reason why all attempts at macroeconomic reform in the Third World- however good-intentioned - are doomed to failure. By presenting results of original grass-roots research that he conducted in five countries (Haiti, Peru, Brazil, Egypt and The Philippines), De Soto demonstrates that the poor are anything but poor. For example, he showed that the poor in Peru owned about $72 billion worth of property, (an amount that was eight times the amount of savings deposits in Peru at the time). The problem, though, is that all of that $72 billion worth of asset is `dead capital', as it is in the extra-legal sector of the economy. Since there are no legal titles or deeds, this `dead capital' could not be put up as collateral to start businesses, or to generate wealth independent of its status as real estate.

De Soto devotes considerable space to examine the history of property rights development in the United States. He shows clearly that the process of developing property rights in the US was not a straight forward. Indeed, it took the better part of a century to develop an integrated, property system that was accessible to the entire U.S. population. Therein, according to De Soto, lie the lessons for today's developing countries.

He finally outlines a strategy for integrating the extra legal population into the economic mainstream: taking the perspective of the poor; co-opting the elites and dealing with the technocrats, who have a vested interest in maintaining outmoded, unrepresentative property systems.

The book's concluding chapter is a gem - albeit a `short' one. De Soto eloquently challenges the `cultural argument' to wit: Is succeeding at capitalism a cultural thing? How much of Bill Gates success, for example, is due to his cultural background and `Protestant Work Ethic' and how much is due to the existence of legal property systems in the United States? His conclusion: "Much behaviour that is attributed to cultural heritage is not the inevitable result of people's ethnic or idiosyncratic traits but of their rational evaluation of the relative costs and benefits of entering the legal property system". De Soto's conclusion is one that I, as a Nigerian, agree with. The poor in my native country are not just an unruly, pre-industrial lot waiting for hand outs from the West. Instead, they are entrepreneurs, who survive - and even thrive - in spite of a hostile economic and political situation. It's time to harness their entrepreneurial energy to produce `live capital'. De Soto's message is timely and well-argued. Therefore, The Mystery of Capital deserves my 4 stars.
Read more
8 people found this helpful
Report abuse

Alan Lenton
3.0 out of 5 stars Too one dimensional
Reviewed in the United Kingdom on 20 September 2008
Verified Purchase
I had high hopes of this book, since I'd come across mention of it in a number of different books read previously. In the event I was somewhat disappointed. It wasn't that I massively disagreed with the book. It was more that I fell asleep while reading it! The problem is that Mr de Soto seems to have been told that you only teach one thing at a time and repeat it in at least three different ways. This may be true talking in a classroom, but in a book it leads rapidly to terminal boredom.

The central theme of the book is simple - the reason while capitalism has not taken off outside the west is not that people are somehow lazy (quite to the contrary) but that legal and property systems do not allow them to use their property to obtain liquid capital. I don't disagree, but I think this is a one-dimensional view. I'm always dubious about single cause explanations for economic and social phenomena, and this idea is no exception. Yes, lack of legal property is an important part of the problem, but it's not the only one, and a more rounded view of the problems involved is needed to resolve them.
Read more
17 people found this helpful
Report abuse

Erik Cleves Kristensen
5.0 out of 5 stars Great
Reviewed in the United Kingdom on 16 October 2007
Verified Purchase
Mr. De Soto's book has almost become a classic in the field of development economics. It is also a compelling and excellently written small book, with good argumentation, not overly using the immense amount of statistical data that underpins it.
The argument is basically that economic development of a more equitable and prosperous for the poorest, could happen by simply creating good legal and administrative framework for property and investment. That is the so-called "mystery of capital": when this is in place, people will be able to extract capital from their property, just as they are largely doing informally in much of the developing world, but completely outside the formal economic system.
The argument is excellent. Therefore, I believe the book is a must-read for anyone working with poverty and development (not only in the developing countries).
Nevertheless, there are still some things that may be discussed. Mr. De Soto is a firm believer in the invisible hand of the market: when the framework is in place, people will be able to help themselves. In that sense, I can't help but thinking that Mr. De Soto is largely speaking of poor people as mostly urban dwellers, who although informally, are already to a degree incorporated into the economic system, and have a (minimum) knowledge and understanding of how the market works and how to extract capital from it.
But what about the poorest of the poorest subsistence farmers in some African countries? I personally don't believe the arguments put forth in the book would change anything for them. On the contrary, without proper protection, they might be in for more exploitation from more capable people...
While I still don't believe the links of market capitalism are directly related to reducing poverty (an argument implicit in Mr. De Soto's book), I do believe that the easing of market restrictions and clarification of property rights which Mr. De Soto argues for, are a pre-condition for economic development, which may help but will not alone alleviate the precarious situation for the poorest of the poor.
Great book.
Read more
One person found this helpful
Report abuse

Junglegirl
5.0 out of 5 stars Brilliantly written explanation of why poor countries stay poor.
Reviewed in the United Kingdom on 25 September 2015
Verified Purchase
Easily the best book on economics I have ever read. Clarity of ideas and the use of anecdotal and interesting examples make this book easy to follow and the nearest thing to an unputdownable read. Will never look at poverty the same way again.
Read more
Report abuse
See all reviews
Back to top
Get to Know Us
Make Money with Us
Let Us Help You
And don't forget:
© 1996-2021, Amazon.com, Inc. or its affiliates