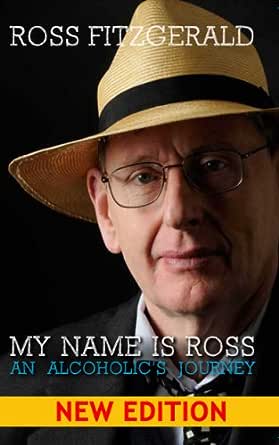 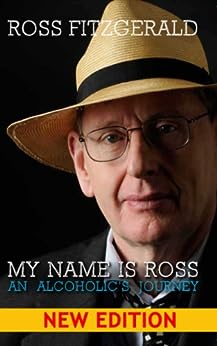 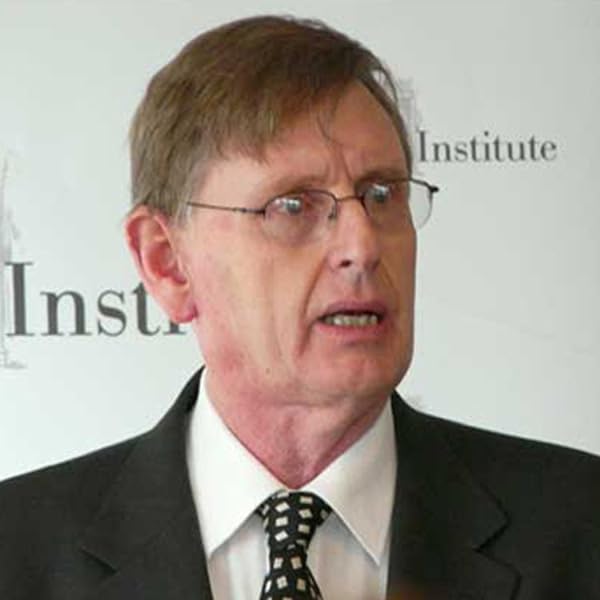 My Name Is Ross: An Alcoholic's Journey Kindle Edition

Ross Fitzgerald is a writer, a broadcaster, a historian, and a political commentator. He is the author of 32 books, including "The Footy Club," "The Greatest Game," and "'Red Ted' The Life of E.G. Theodore," which was short-listed for the NSW Premier's Prize and the National Biography Award. He also writes regular columns for the "Australian" and the "Spectator Australia" and reviews for the "Sydney Morning Herald "and the "Weekend Australian." --This text refers to an alternate kindle_edition edition.

"After a lifetime writing about other people, Fitzgerald turns the spotlight on himself in this his latest, and most important, book. A revelation . . . and an inspiration." --Nigel Marsh, author, "Fat Forty and Fired"

"Ross Fitzgerald's remarkable life journey with and without alcohol and substance abuse is both candid and confronting. And never more relevant to the times in which we live." --Anne and Gerard Henderson, directors, The Sydney Institute --This text refers to an alternate kindle_edition edition.

4.0 out of 5 stars
4 out of 5
11 global ratings
How are ratings calculated?
To calculate the overall star rating and percentage breakdown by star, we don’t use a simple average. Instead, our system considers things like how recent a review is and if the reviewer bought the item on Amazon. It also analyses reviews to verify trustworthiness.

Phil Tagell
4.0 out of 5 stars Very moving and fearlessly honest
Reviewed in Australia on 13 April 2014
Verified Purchase
I enjoyed Ross' insightful recollections of his youth and felt for him as his relationship with his mother was far from close. His admiration for his dad was palpable and touching given the times and attitudes they spawned, I felt his pain and admiration in equal measure.
His telling of his descent into alcoholism was frightening and his courage in pulling himself out was inspiring. His determination to remain sober and his dedication to AA and all it's done for him and countless others is immeasurably honourable, Ross is a beacon for all in the grip of the grog and his struggle will only end with his death, his fortitude is simply remarkable.

I have recommended his story to a member of my family who has an addiction problem, Ross' story should help him in his way through life, I sincerely hope so.
Read more
One person found this helpful
Helpful
Report abuse

Geoff Newton
5.0 out of 5 stars Brilliant.
Reviewed in Australia on 30 January 2018
Verified Purchase
A scathingly honest account of a life cursed by alcoholism and at the same time blessed by genius. Without a doubt one of the most uplifting books I have ever read.
Read more
Helpful
Report abuse

Joxx Wong
5.0 out of 5 stars Worth it
Reviewed in Australia on 22 October 2014
Verified Purchase
Great read from an author who has a lot to tell. Inspiring for those of us dealing with alcohol issues.
Read more
One person found this helpful
Helpful
Report abuse

Daisy Mae/Jan Smith
4.0 out of 5 stars Luck of the Irish
Reviewed in Australia on 16 February 2016
My Name is Ross: An Alcoholic’s Journey by Ross Fitzgerald

According to my alcoholic girlfriend, it’s more like his name is mud, because one of the most important of AA’s Twelve Traditions is that members don’t reveal their identities to the media. As she says, they might get bigheaded and start thinking they did it all by themselves.

But as my dad used to say, circumstances alter cases and one thing I can tell you is when Ross was starting out in the Sixties, AA needed all the help it could get - as did I, as the wife of an alcoholic who refused to go.

Back in the Australian jahillaya of the Fifties, belonging to AA was like saying you’d joined the Flat Earth Society, as bad as saying you’d taken the pledge with the Rechabites (still going strong in Toowong, Brisbane, he notes). In boozy Sydney, submitting to a power greater than yourself went against the prevailing atheist grain, and it’s not surprising to learn that things were much the same in Melbourne, where Ross was drawn to atheism and Communism from an early age. Even today you can find websites banging on about how AA is a cult, all about indoctrination and next door to religion, OMG, so I loved his joke (there’s lots) about the Irishman who asks ‘but are you a Catholic atheist or a Protestant atheist?’ In Sixties Australia, it was a bit early for Jewish atheists, probably they were one of the many things we fondly imagined only happened in America.

So we need to see Ross’s journey in perspective. In 1935, when AA started in Ohio, it was a giant leap forward from the prevailing view, even after Prohibition, was that alcoholism was a moral failing. Ross escaped that, but in his childhood the shadow of his alcoholic grandfather loomed large, and he writes that he was not just genetically but psychologically headed for trouble, with two depressive parents who both attempted suicide by overdose when he was 12.

But by the Sixties the emphasis was more on the disease concept, and a decade later alcohol was officially declared an addictive substance, for which a list of diagnostic criteria were steadily developed, paving the way for the Diagnostic and Statistical Manual for Mental Disorders, of the American Psychiatric Association.

Ethan Watters has recently savaged the criteria model in Crazy Like Us: The Globalisation of the American Psyche, so it’s interesting to discover that pre-Big Pharma, the Russian definition of alcoholism, pre or post-Revolution, was much like Australians’ used to be. A Russian wasn’t really an alcoholic until he was found at death’s door in a ditch, because they were divinely endowed with the capacity to drink more than other people, probably because God knew they’d need it to get through the Russian winter – so as the climate stayed the same, Communism made little difference..

I wish Ross had said more about climate, and how other cultures dealt with alcoholism, but as he’s written 38 books, maybe he already has. Besides, this is a personal story, so why should he, when there’s quite enough to get through – his unbelievably good grades at university despite being mostly drunk, winding up in a mental hospital in Kerala, suicide pacts involving stolen cars, and the Fulbright scholarship to Case Western, Ohio where he was again hospitalized, three or four times, and subjected to ECG.

That’s when he decided to stop trying to kill himself, and soon after his return to Australia he made an even wiser decision, marrying a woman who was already a teetotaler. Even better, she was glad he was so often out in the evenings, attending AA meetings, as she needed her own space.

I wish he’d told us why and how Lyndal quit, it can’t have been easy even for Australian women, and being married to Ross was no picnic either in the early days. Another gem is his story about the woman counsellor in Queensland who, contrary to Ross’s expectations that he’ll be automatically in the doghouse, suggests to Lyndal that his view of things sounds entirely reasonable.

All in all, a fun read, even in the early stages when it’s horrendous at the same time, though you may also wish there’d been more about AA people who simply switch to eating, smoking, cats or tatts, and whether there’s twelve handy tricks for dealing with this. Again, maybe it’s in one of his other 37 books, or Ross has had the luck of the Irish yet again.
Judging by his satirical-sexy-political Grafton Everett novels, which are more about the journey of Professor Ross Fitzgerald the academic, historian and political commentator, his only problem seems to be food.
Read more
One person found this helpful
Helpful
Report abuse
See all reviews

Bill H
1.0 out of 5 stars I thought it was 300 pages
Reviewed in the United Kingdom on 25 September 2012
Verified Purchase
I bought this, very cheaply of course, because I thought it was 300 pages. In fact it was no more than what most ebooks give as a free summary. (There was a free summary, which gave very little indication of the style of the book). So I feel Kindled/swindled.

In one place Amazon states the book is 300 pages. Later, it says, accurately, that the Trial Edition is Chapter 1 only. Contradictory.

I think the Trial Edition should be the free summary. But I'm not going to campaign over 77p.
Read more
One person found this helpful
Report abuse

Howard Davies
5.0 out of 5 stars My name I'd Ross: An alcoholic's journey.
Reviewed in the United States on 25 July 2013
Verified Purchase
I went to Melbourne High after Ross. His descriptions of his teachers, particularly the right wing Horton Hobson amused me with its accuracy. His consequent descriptions of his own character are surprisingly open and candid. Usually people who write biographies ultimately apologise for, then commend themselves. Ross does tell of his literary and academic achievements but he includes his feats as a dirty rotten, cheating scoundrel drunk as well. How about when he serves an academic posting as a Russian expert extraordinaire when he doesn't speak the language or know much Kremlin stuff? During the read we learn fellow sponge Barry Humphries showed Ross his first showing of the now infamous and disgusting Les Patterson. I was left thinking maybe Barry was character sketching his mate Ross. Ross convinced me alcoholism is a genetic disease and some people are better off never touching the stuff. A great read for a Melbourne baby boomer like me.
Read more
2 people found this helpful
Report abuse

Sir Thomas
4.0 out of 5 stars A brutally frank story of alcoholism
Reviewed in the United States on 30 May 2014
Verified Purchase
This is a brutally frank and stark account of a man who became an alcoholic at a young age and, with the ongoing assistance of Alcoholics Anonymous, managed to enter long-term recovery. Ross Fitzgerald is a person of great intellect and is renown for his perceptive, somewhat controversial and humorous insights into many aspects of Australian history and society. This book is one of many he has authored and is recommended reading for anybody wanting to understand more about the dark and confronting world of people addicted to alcohol and other drugs.
Read more
One person found this helpful
Report abuse

Geoffrey Freeman
3.0 out of 5 stars Interesting but too long
Reviewed in the United States on 15 June 2013
Verified Purchase
The story of an intelligent young man's struggle with alcohol is interesting but the book is repetitive, tedious in places, a bit self-indulgent and does not need to be this long.
Read more
Report abuse

Amazon Customer
5.0 out of 5 stars I will certainly recommend it to others
Reviewed in the United States on 16 August 2016
Verified Purchase
I found the book very informative. It offers hope for alcoholics and valuable insight for their families. I will certainly recommend it to others. Ross is a lucky survivor. His writing style so easy to read. Kathie
Read more
Report abuse
See all reviews
Back to top
Get to Know Us
Make Money with Us
Let Us Help You
And don't forget:
© 1996-2021, Amazon.com, Inc. or its affiliates