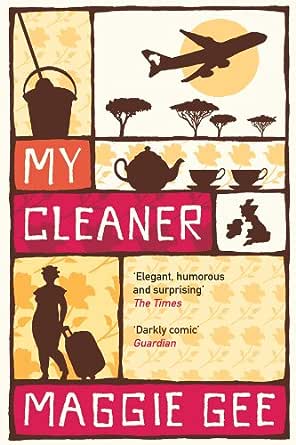 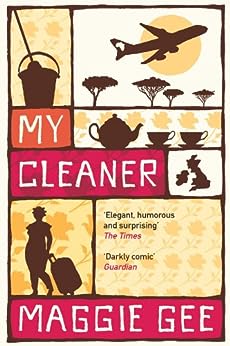 'This beautifully observed, intelligent and moving novel is one of those rare things - a small, carefully wrapped surprise that gets better and better with the unravelling.' The Scotsman 'Maggie Gee is a superb and pitiless analyser of middle-class angst. Elegant, humorous and surprising, this is a classy performance.' The Times 'My Cleaner is a moving, funny, engrossing book.' The Observer 'My Cleaner is a calmer, happier novel [than The Flood]. Yet a gnawing tragedy lies in the shadows, all the more poignant for the deftness with which it's brushed aside.' The Independent 'It's amazing how many details, characters, stories within stories, Maggie Gee's unquenchable exuberance crams into this comparatively short book.' The Spectator 'An intelligent and satisfying read.' The Sunday Times 'A smart satire on a subject central to most women's lives ... we either keep our houses clean, or pay someone else to do it. It's a queasy thought ... and [one] you will never brush casually aside again after reading My Cleaner.' Daily Telegraph 'Gee satirises the liberal conscience of the chattering classes with uncomfortable perception in this hugely enjoyable novel ... her portrayal of Britain's new underclass of immigrant workers is presented with her trademark stinging clarity.' Metro Praise for Maggie Gee: 'Gripping, original and highly entertaining - Maggie Gee at her superb best.' J G Ballard 'Dazzling ... alternately lyrical and austere ... unbearably touching.' The Observer 'Compulsively readable.' Guardian '... a rare writer who is willing to address issues topical to contemporary Britain.' Daily Telegraph --This text refers to an out of print or unavailable edition of this title.

Maggie Gee was chosen as one of Granta's 'Best Young British Novelists' in 1983. Since then she has published nine novels to great acclaim, including Grace, The Ice People and The White Family, which was shortlisted for the 2002 Orange Prize for Fiction and for the International Impac Dublin Literary Award 2004. Her last novel, The Flood, was longlisted for the 2004 Orange Prize. She is the first female Chair of the Royal Society of Literature and lives in London. --This text refers to an out of print or unavailable edition of this title.

4.1 out of 5 stars
4.1 out of 5
113 global ratings
How are ratings calculated?
To calculate the overall star rating and percentage breakdown by star, we don’t use a simple average. Instead, our system considers things like how recent a review is and if the reviewer bought the item on Amazon. It also analyses reviews to verify trustworthiness.

sally tarbox
TOP 1000 REVIEWER
3.0 out of 5 stars "She and Vanessa are not so different. In some ways they are almost the same"
Reviewed in Australia on 2 January 2018
Maybe 2.5* for a readable, if really rather silly, bit of chick-lit.
Vanessa is a lecturer in Creative Writing and rather a sloane ranger type, with her materialistic, fashionable London life. But her 22 year old son Justin is lying in bed with some sort of breakdown, and Vanessa invites her old cleaner, who helped bring him up, back to the home from Uganda, to help.
And so the stage is set for an implausible tale. Inevitable tensions between Vanessa - unpleasant, stingy, jealous - and Mary - forced to occupy a subordinate role, but very much her own person.
The glimpses of Mary's life in Uganda were quite interesting, but I just didn't buy the interplay of the two women.

Sandra L
5.0 out of 5 stars Loved it!
Reviewed in the United Kingdom on 1 June 2020
Verified Purchase
Have read quite a few of Maggie Gee's novels and loved them all apart from one! As usual this is written in a lovely accessible witty style. It offers a gentle insight into differing cultures and prejudices through a well plotted story. Will definitely be reading My Driver to see what develops although this could be read as a stand alone story.
Read more
One person found this helpful
Report abuse

E. Nicol
3.0 out of 5 stars Well written
Reviewed in the United Kingdom on 10 May 2020
Verified Purchase
Tedious but intriguing. Pretty awful characters. And a total negativity in the portrayal of England and the English was very wearing. Did not enjoy this story but it is very well written. The ending is silly.
Read more
One person found this helpful
Report abuse

Ralph Blumenau
5.0 out of 5 stars A Ugandan looks at England
Reviewed in the United Kingdom on 15 November 2010
Verified Purchase
The main characters in this beautifully written book:

Vanessa Henman is a writer, snobbish, selfish, insecure, self-deluding, a cold single mother, though her ex-husband Trevor looks in frequently to fix things in the house and to keep in touch with Justin, their son.

Mary Tendo is a Ugandan. Educated at Makerere College, she had been sent by her government to do an MA in London, but then the government grant stopped; Mary could not afford to continue with her MA and took a job with Vanessa, initially as a cleaner twice a week, but soon looking after Justin, who became very fond of her as she of him. He was three when she arrived and eleven when, having saved enough money, she returned to Kampala. There she has found a decent job as the Linen Store Keeper in one of the top hotels, and is saving money to be able to retire to her native village. She is confident and satisfied with her life (though she has one great grief whenever she thinks of her much loved son Jamil whom her Libyan ex-husband took with him to Tripoli).

Then she receives a letter from Vanessa: Justin, now 21, "is very ill. He never gets up". He was still so fond of Mary; could she possibly come back to look after him? The money would be good. So Mary returns. She secured twice the wages that she had been offered: an early sign both of her confidence and of the new relationship between her and her employer. Justin is indeed mentally very sick, and Vanessa can do nothing with him; but he responds to Mary, which further tilts the balance of power in the household towards her. There is growing tension between the two women, and the reader is on tenterhooks, especially in the last few pages, about how it will all work out. Mary is as robust as Vanessa is brittle. In the end we feel sorry for Vanessa, especially as we learn more about her background and she is not wholly dislikeable. Both characters are beautifully drawn, and I can't wait to meet them again in the sequel, "My Driver".

Mary is a delightful character, and a particular charm of the book is her attitude to Europeans: she is not in awe or in fear of them; rather she comments, almost in the manner of an anthropologist, on the artificial and stilted way in which they live and on their accumulation of possessions.

Kindle Customer
4.0 out of 5 stars Thought-provoking but perhaps a little over-thought
Reviewed in the United Kingdom on 23 May 2013
Verified Purchase
I was engaged by this book despite the lack of engaging characters. It made ideal fodder for discussion at the informal book-club I take part in. Themes of snobbery, whether academic, class or racial, thread through the whole book. Whilst the narrative runs from Uganda to Britain and from city to village, it feels quite claustrophobic much of the time - little lives with big impacts on other people. The premise of the book is that the academic writer, Vanessa, calls on her former cleaner, Mary, when her grown-up son has a breakdown, regresses in behaviour and takes to his bed. Mary now lives in Uganda, which she left to study in Britain - but her plans came unstuck and she ended up cleaning for a living to support her Libyan husband and her young son. Her son and Vanessa's were of similar age, and Mary had looked after the boy while Vanessa worked, developing a close, motherly relationship which we are led to believe was probably closer than Vanessa's own relationship with her son.

Mary wants to earn money so she can go back to her home village in Uganda with her head held high as a success; Vanessa couldn't wait to leave her village, where her family were very poor, and has never felt a desire to visit. Mary's presence is a catalyst for (eventually) changing attitudes and relations. Vanessa's writing career is in decline; Mary is inspired to become a writer. See what I mean by being just a little over-thought?!

Despite things being perhaps a little too artfully plotted out, it is surprisingly readable and indeed has quite a lot of humour - sometimes not of the comfortable kind. Worth reading.
Read more
2 people found this helpful
Report abuse

Katharine Kirby
5.0 out of 5 stars Funny, touching and sharply observed, a joy to read
Reviewed in the United Kingdom on 1 September 2009
Verified Purchase
A lively warm, thoughtful and human tale. Outwardly confident, curvaceous, beautiful, Mary Tendo from Uganda returns to London after a decade away, to ride to the rescue of her erstwhile child charge. Poorly, driven Justin has withdrawn from his complicated world into his bedroom and cannot be bossed back to his life by his hectic, flaky, brainy but lacking into common sense mother, Vanessa. He calls for Mary and she answers the cry. Mary is anxious to earn a good deal of money quickly in order to help out her village and family there, also to try to find her long missing son Jamil. Mary is no longer a "Cleaner" and she has exciting plans for her future. She is confident that she can coax Justin back to his old self and enjoys the challenge. Plenty of painfully acute observations on the differing problems facing English people and her countrymen. She proceeds to work with the sorry case of Justin in her own special way, bringing him closer to happiness and solving the mystery of his breakdown. Magnificent Mary establishes herself in her new position and the story of what happens next is absorbing, impressive and life affirming. All these threads are bound together by such delightful writing together with a large dose of truly funny and touching observations - a completely worthwhile read with a love of the human condition at it's very core. I enjoyed Mary's voice especially - I am also fond of reading Alexander McCall Smith who writes in a similar kind way about Africa. Maggie Gee is a seriously heavyweight recorder of the realities of everyday life - still she manages to make her readers feel hopeful and light hearted despite the troubles she describes. "My Cleaner" is followed by "My Driver" in a most satisfactory way so it is a great idea to buy both at once. I have also read "The White Family" by Maggie Gee and enjoyed that tremendously too.
Read more
One person found this helpful
Report abuse
See all reviews
Back to top
Get to Know Us
Make Money with Us
Let Us Help You
And don't forget:
© 1996-2021, Amazon.com, Inc. or its affiliates