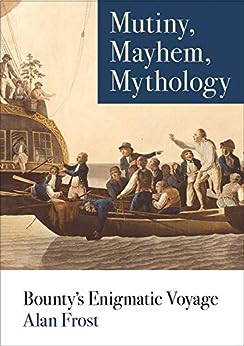 by Alan Frost (Author) Format: Kindle Edition
See all formats and editions
Sorry, there was a problem loading this page. Try again.

In 1789, as the Bounty made its return voyage through the western Pacific Ocean, disgruntled crewmen seized control from their captain, William Bligh. The mutineers set Bligh and the eighteen men who remained loyal to him adrift in one of the ship’s boats, with minimal food and only four cutlasses for weapons.

In the two centuries since, the mutiny and its aftermath have become the stuff of legend. Millions of words have been written about it; it has been the subject of novels, plays, feature films and documentaries. The story’s two protagonists – Bligh and his mutinous deputy, Fletcher Christian – are cast as villain and hero, but which is which depends on which account you read.

In Mutiny, Mayhem, Mythology, Alan Frost looks past these inherited narratives to shed new light on the infamous expedition and its significance. Returning to the very first accounts of the mutiny, he shows how gaps, misconceptions and hidden agendas crept into the historical record and have shaped it ever since.

'...indispensable for anyone with a genuine interest in understanding the truth.' -- Michael Pembroke -- The Age

'Frost's scholarly account is an extremely helpful contribution to studies about the mutiny.' -- Ross Fitzgerald -- The Australian

'By returning to the original sources and subjecting them to detailed and careful forensic analysis Frost sets a standard in research which future writers in this field should follow.' -- Neil Radford -- The Dictionary of Sydney
--This text refers to an out of print or unavailable edition of this title.

Alan Frost is professor emeritus of history at La Trobe University. His previous books include Botany Bay: The Real Story, The First Fleet: The Real Story, The Voyage of the Endeavour and The Global Reach of Empire. --This text refers to an out of print or unavailable edition of this title.

There are 0 customer reviews and 1 customer rating.
Back to top
Get to Know Us
Make Money with Us
Let Us Help You
And don't forget:
© 1996-2022, Amazon.com, Inc. or its affiliates