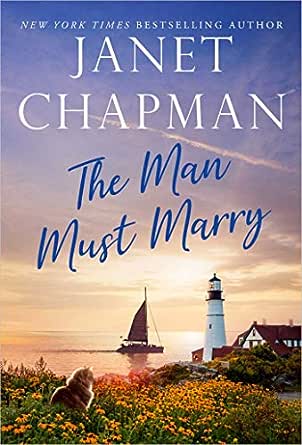 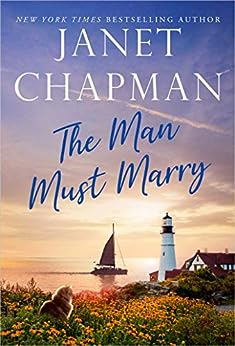 "Janet Chapman melds great characterization, sparkling humor, and spicy adventure into a perfect blend." ― Romantic Times --This text refers to an out of print or unavailable edition of this title.

A native of rural central Maine, Janet Chapman (1956–2017) lived in a cozy log cabin on a lake with her husband, three cats, and a stray young bull moose. The author of the hugely popular Highlander time-travel series, she also wrote numerous contemporary romances. --This text refers to the paperback edition.

spanna
4.0 out of 5 stars Four Stars
Reviewed in Australia on 7 July 2016
Verified Purchase
Not bad. I love the angst between the antagonists.
Read more
Helpful
Report abuse
See all reviews

LEP
5.0 out of 5 stars Silly title, good story
Reviewed in the United Kingdom on 31 January 2009
Verified Purchase
Tacky title and not very good cover image (slightly pudgy young man with his shirt off - a yatch would have been better), however a very amusing and witty story.

When Abram Sinclair, 85 years old and a self made millionaire, finds out that he has heart trouble and not long to live, he resigns as CEO of his company and disappears from his home, much to the concern of his 3 grandsons who don't know that he is ill. Since his grandsons hit 20 he has been trying to persuade them to marry - without any luck.

He goes to the Maine coast to visit an old friend. However, he rents a cottage off 29 year old Willa Kent, who has a small business making designer coffins. Willa employs several of the towns retired citizens, who basically take over and do as they want to when she is out of the office for a day or two. E.g. repainting the building and revamping the reception area.

Willa is a carer, who wants to help everyone and takes their troubles onto her own shoulders, hence her employing senior citizens. She is wracked with guilt over a car accident 5 years ago in which her then 11 year old neice was injured, never mind that Willa actually saved Jennifer's life at the time. Willa is divorced and "once bitten twice shy".

Abram's grandson's have been left with the problem of which of them is to run the business in his absence. So he persuades Willa to do him a favour and go to the boardmeeting with his proxy vote. She is to use her own judgement as to which man is the best for the job. Willa, may be many things but stupid is not one of them and she is aware that Abram is trying to match make and has no intention of taking the bait.

Willa is short, plump, curvy and doesn't care less re. clothes, usually wearing jeans. So she borrows one of her employees 1970's business suit and wears her mother's too big shoes. Her travel bag gets stuck in the lift doors and 'eaten'. She is nothing like the tall, sophisticated model girls that the Sinclair men usually go for.

So Sam Sinclair's first impression is of a little brown frumpy klutz of a woman, whose hair is slipping out of a bun and whose green shoes are too big for her and who is holding the handles of her travel bag. However, she soon lets him see that she is intelligent, fiesty and wryly witty.

Willa decides that she is not going to make an instant decision about use of her proxy vote and tells the Sinclairs that they must take her to dinner that evening so that she can get to know them and make up her mind.
The Sinclairs realise that this is another of Abram's matchmaking attempts and think that Willa is in on it.

Unfortunately Abraham then dies and leaves a mine field of a Will which includes Willa in it. One of the grandson's has to marry her or they all lose the business to a rival firm and they have 3 months to make up their minds. There is a further stipulation that Willa and her husband must have a child by the end of 11 months of marriage. Willa has already decided that she is not going to ever have children.

Incensed by the will, Willa takes off back to Maine, followed by Sam.

What follows is a gentle and witty story, amptly backed up by ecentric and funny secondary characters.

Andreas Sarker
3.0 out of 5 stars Three Stars
Reviewed in the United Kingdom on 13 November 2014
Verified Purchase
Interesting but not gripping as other stories by this author.
Read more
Report abuse

M. Hatton
2.0 out of 5 stars The man must marry
Reviewed in the United Kingdom on 27 July 2010
Verified Purchase
I bit pratictable. Was not as exciting as her earlier books, in fact I was disappointed. Lack originality
Read more
One person found this helpful
Report abuse

Jane
3.0 out of 5 stars Ok story but almost too sweet. Rich handsome guy falls for dowdy, accident-prone small town girl.
Reviewed in the United States on 19 July 2009
Verified Purchase
STORY BRIEF:
Abram built a shipping empire. He is dying and went to a small coastal town in Maine to spend his last days. He met Willa who owns a casket making company. He wants Willa to marry one of his grandsons, for her benefit and for their benefit. His three grandsons lost their parents at an early age and were raised by Abram. The three grandsons are confirmed bachelors. Abram retired and gave Willa his proxy to vote to choose one of them as his successor. Willa traveled to and attended the board meeting in New York City as a favor to Abram. For some reason, Sam (one of the grandsons) is nearby to see and help her survive accidents such as getting her purse caught in the elevator door, getting locked out of her hotel room, etc. Willa is suffering guilt over some things in her life. She doesn't live a normal life due to guilt, and she's a bit whiny.

REVIEWER'S OPINION:
This was a pleasant romance novel, but there was nothing new or different enough to make it stand out from the rest. I think Sam fell in love with Willa too soon and too easily. He dated a number of women over the years for no more than a few months each. I didn't understand how he "fell in love at first sight" with a dowdy, unsophisticated, accident prone woman. I would have preferred watching things happen between them for awhile before he fell in love.

Minor irritation (publisher's fault): Sam has hair on his chest. The guy on the cover does not.