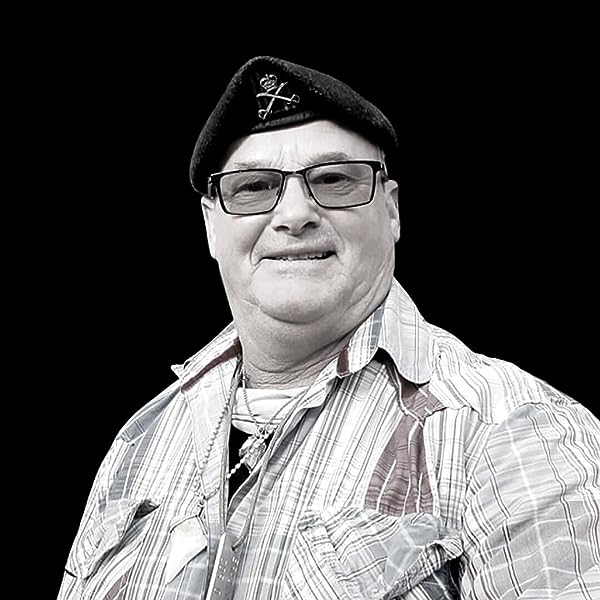 by Rick Carey (Author)
5.0 out of 5 stars 6 ratings
See all formats and editions
Sorry, there was a problem loading this page. Try again.

Join Rick Carey on his epic 40,000km unsupported, solo journey around Australia, on the back of a Royal Enfield Bullet, aptly named Peggy Pegasus C50389.​Rick's witty, down to earth accounts are brilliantly balanced by his honest, sometimes frustrated, reflections of sharing basic medical care and first aid with the First Nations peoples who welcome him into their remote communities. By helping those suffering from easily curable diseases Rick is motivated to continue the movement for real change in addressing, raising awareness of and at last, attempting to permanently 'close the gap.'​

His five months touring Australia's outback are a riveting, brutally honest read, as Rick takes his mobile motorcycle treatment facility across the country, making friends, learning to be an effective ally in the fight for change and spurring on readers to be part of the solution, not the problem.

​"A brilliant travel memoir that both entertains and educates. " Jeff Farrell Clontarf Ambassador

Get 90 days FREE of Amazon Music Unlimited
with the purchase of any eligible product. Shop now
Start reading Muriel The Medicycle on your Kindle in under a minute.

Rick Carey was born in 1955, in Yorkshire England to parents who were both serving members of the Royal Air Force. His early childhood years were spent in Northern Ireland, where his father was posted before the family returned to Yorkshire, where Rick attended Moorfield Public School, and then Headlands Secondary Modern School, in Bridlington. A strong interest in medicine, anatomy and helping people led Rick to join the British Royal Army Medical Corps in 1971 where it was soon realised he had a real talent for absorbing medical and physiological information. He spent the next several years as a combat medic serving in Germany, Cyprus, Africa and Canada.

While based as a medic in London, Rick developed an interest in long distance running and represented England in the New York Marathon in 1980 as part of the British Army team. In 1982 he won the Hampshire Marathon Championship on the gruelling Isle of Wight course. As a Nationally Ranked Marathon runner, Rick decided to re-evaluate his military career, and was accepted by the Army Physical Training Corps. The APTC is a small but elite group of the Army’s fittest soldiers tasked with the role of physical training for all branches of the British Army. As a Sergeant Instructor, Rick trained a broad cross-section of forces from foot soldiers to the British Special Forces, including the Paras and the SAS.

In 1986, Rick left the UK and his army career behind him to join his future wife in Australia, working in a Sydney Factory before being employed as a pool lifeguard with Queanbeyan Council. By 1987, Rick had joined the ACT Fire Brigade and served on active duty as a firefighter in the Canberra region. From here, he was offered a role managing the Canberra City YMCA Recreation Centre. Together with his deputy, Helen Palethorpe, he went on to successfully develop and deliver many new programs for older adults based around health, wellbeing and independence.

Based on his work at YMCA and his time spent in the APTC, Rick was recruited by The Canberra Institute of Technology in 1994 to teach Sports Science. Once again, he was recognised for developing several new programs and curriculum in Sports Science and Outdoor Education. During this time, he became the foundation member of the Canberra Climber Association, which he instigated in response to the Canberra bush fires of 2003. Later that year, Rick returned to his military roots, when he was selected to serve on then Prime Minister John Howard’s Anti-Terrorism Program. This exacting combat program required great skill and courage, and at almost 50 years of age, with old army injuries slow to heal, Rick regretfully chose to resign and returned to teaching, despite being highly regarded in the field.

Rick never fully recovered after watching his former wife pass away after a long battle with breast cancer, leaving The Canberra Institute of Technology in 2006. He went on to develop a career in the disability sector, creating programs specifically designed for people with disabilities. This difficult and challenging job saw him running a group home and organising ongoing recreational programs for his clients. After many years in this role, he was awarded The Disability Worker of the Year Honour in 2011.

Unfortunately, Rick became ill in 2016, fighting PTSD and major depression. This saw him spending 5 months in hospital and undergoing many treatments including Electro Convulsive Therapy. Despite the fear this produced, Rick fought on and eventually recovered enough to return to his dogs and home in the Snowy Mountains of NSW. It was this experience that led to his idea of riding around Australia to raise funds for soldier charities and PTSD recovery. That initial trip, titled A Bridge To Far, led him to his next adventure, Muriel the Medicycle, and his growing understanding of the issues that Australia’s First Nations people face today.

Alonya Juliana de Northwood
5.0 out of 5 stars Compelling, fun, confronting
Reviewed in Australia on 28 October 2021
Verified Purchase
I loved it. Peggy the Pegasus. A humorous, fun, and sometimes tear-illiciting story.
I am not Australian either, and I am appalled at how the indigenous people of this country are overlooked and marginalised.
An honest interpretation about the ongoing effects of successive greedy governments.
I fully intend on visiting some of these places to spend my tourist dollar to try and help support where I can.
Please consider purchasing this book. The proceeds go to the Fred Hollows Foundation, and to treating easily curable diseases in our far-flung communities. A worthy cause indeed.
Read more
Helpful
Report abuse

Richard
5.0 out of 5 stars Worthwhile read!
Reviewed in Australia on 23 October 2021
Verified Purchase
At times challenging, always interesting a great read for anyone who considers it may be something they'd consider picking up.
Read more
Helpful
Report abuse
See all reviews

Jim Andrews
5.0 out of 5 stars An epic motorcycle journey by a caring Carey.
Reviewed in the United Kingdom on 31 December 2021
Verified Purchase
This book was written by an old army buddy of mine. Rick was an inflictor of pain during the mid 80's as a physical training insructor at Inglis Barracks, Mill Hill, in NW London. A practical joker, a fearless competitor, and a likeable misfit. His epic journey around Australia on his little Enfield, is very understated. He doesn't dwell on his own discomfort. Every biker knows the pain of, numbbum, rigor-mortified hands and seized knees. Highlighting the plight of the indigenous Australian is the aim, which Rick adheres to. Also the mismanagement of the nations natural resources. I enjoyed reading the book, its lighthearted humour coupled with hard hitting facts. I hope your black dog can be kept locked in its Kennel, while you can enjoy the love of your Whippets. Rick
Read more

5.0 out of 5 stars An epic motorcycle journey by a caring Carey.
Reviewed in the United Kingdom on 30 December 2021
This book was written by an old army buddy of mine. Rick was an inflictor of pain during the mid 80's as a physical training insructor at Inglis Barracks, Mill Hill, in NW London. A practical joker, a fearless competitor, and a likeable misfit. His epic journey around Australia on his little Enfield, is very understated. He doesn't dwell on his own discomfort. Every biker knows the pain of, numbbum, rigor-mortified hands and seized knees. Highlighting the plight of the indigenous Australian is the aim, which Rick adheres to. Also the mismanagement of the nations natural resources. I enjoyed reading the book, its lighthearted humour coupled with hard hitting facts. I hope your black dog can be kept locked in its Kennel, while you can enjoy the love of your Whippets. Rick
Images in this review

Tony Mee
5.0 out of 5 stars An engaging and educational read
Reviewed in the United Kingdom on 16 December 2021
Verified Purchase
Whenever I read a non-fiction book I want to learn something new. This was certainly the case with Rick’s engaging, but eye opening book detailing his epic journey around Australia on a Royal Enfield motorcycle. Rick certainly doesn’t hold back in his criticism of the treatment of the indigenous people of Australia but also shines a light on, what appears to be shameful mismanagement of Australia’s water supplies.
His ability to engage with the indigenous people and particularly to charm the children adds another layer to an excellent read.
MENS SANA IN CORPORE SANO.

russel lloyd morgan
5.0 out of 5 stars Fit in mind body and soul!
Reviewed in the United Kingdom on 23 October 2021
Verified Purchase
Down to earth account and view of the real world by a planet earth indigenous human, Rick Carey, my brother!
Read more
2 people found this helpful
Report abuse
See all reviews
Back to top
Get to Know Us
Make Money with Us
Let Us Help You
And don't forget:
© 1996-2022, Amazon.com, Inc. or its affiliates