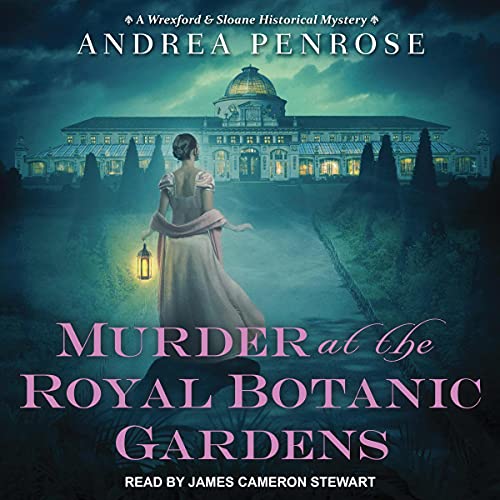 The upcoming marriage of the earl of Wrexford and Lady Charlotte Sloane promises to be a highlight of the season, if they can first untangle - and survive - a web of intrigue and murder involving the most brilliant scientific minds in Regency London....

One advantage of being caught up in a whirl of dress fittings and decisions about flower arrangements is that Charlotte Sloane has little time for any pre-wedding qualms. Her love for Wrexford isn't in question. But will being a wife - and a countess - make it difficult for her to maintain her independence - not to mention, her secret identity as famed satirical artist A. J. Quill?

Despite those concerns, there are soon even more urgent matters to attend to during Charlotte and Wrexford's first public outing as an engaged couple. At a symposium at the Royal Botanic Gardens, a visiting botanist suffers a fatal collapse. The traces of white powder near his mouth reveal the dark truth - he was murdered. Drawn into the investigation, Charlotte and the Earl learn of the victim's involvement in a momentous medical discovery. With fame and immense fortune at stake, there's no shortage of suspects, including some whose ruthlessness is already known. But neither Charlotte nor her husband-to-be can realize how close the danger is about to get - or to what lengths this villain is prepared to go....

Switch between reading the Kindle book & listening to the Audible narration with Whispersync for Voice.
Get the Audible audiobook for the reduced price of $4.99 after you buy the Kindle book.
Learn more about membership
By completing your purchase, you agree to Audible’s Conditions Of Use and Privacy Notice.
Sold and delivered by Audible, an Amazon company
Share

4.5 out of 5 stars
4.5 out of 5
110 global ratings
How are ratings calculated?
To calculate the overall star rating and percentage breakdown by star, we don’t use a simple average. Instead, our system considers things like how recent a review is and if the reviewer bought the item on Amazon. It also analyses reviews to verify trustworthiness.

S. Ray
5.0 out of 5 stars Superb storyline.....as always
Reviewed in Australia on 30 September 2021
Verified Purchase
I have read this series from the beginning and have loved all the nuances, thought processes and unwinding of Charlotte's past and Wrexford's slow relaxing of his temper and strict empirical reasoning.
Raven and Hawke are little treasures and Aunt Alison is a joy.
The plots, based on historical events and scientific discoveries are sophisticated and realistic.
A truly engaging series.
Read more
Helpful
Report abuse

BEVERLEY LIEBELT
5.0 out of 5 stars Wow. Another great Wrexford and Sloane novel.
Reviewed in Australia on 7 October 2021
Verified Purchase
Thoroughly enjoyed reading this. I had to force myself to put it down so I could get other things done. Thank you Andrea Penrose.
Read more
Helpful
Report abuse

gill groom
4.0 out of 5 stars Good engaging yarn
Reviewed in Australia on 3 November 2021
Verified Purchase
It was a light escapist novel that I had to read for bookclub this month. Didn't disappoint.
Read more
Helpful
Report abuse
See all reviews

Jay
5.0 out of 5 stars Excellent
Reviewed in the United Kingdom on 1 October 2021
Verified Purchase
A brilliant and devious plot that kept getting better and better. Lovely ending which was to be expected. Do hope there will be more stories in this great series. And now that I’ve finished it, I shall read it again to remind myself of anything I missed. Very well worth reading
Read more
Report abuse

Doherty
5.0 out of 5 stars Bad spelling
Reviewed in the United Kingdom on 3 October 2021
Verified Purchase
A very good mystery and historical well done , only needed spelling corrections in some parts , I would read another , and found a lot of information I did not know,excellent
Read more
Report abuse

Book Nut
4.0 out of 5 stars Not my favorite in the series but still great
Reviewed in Canada on 29 October 2021
Verified Purchase
The only reason I marked it down by one was that the mystery was way more convoluted than it needed to be. It was so confusing to keep some of the secondary characters and suspects straight, it slowed me down. Maybe that’s just me and not being clever enough to follow. Otherwise still a good book, with all the fun characters supporting the MCs back again. Great read.
Read more
Report abuse

erinaf
5.0 out of 5 stars A botanist's death puts moral fortitude to the test
Reviewed in the United States on 8 October 2021
Verified Purchase
I'd rate this 4.5 stars. While this book wasn't my favourite in the series, I thought it read better than Book 4 giving me hope that I’ll continue to enjoy this series (especially since it comes with a fairly hefty price tag). Quick note: if you haven't read any of the previous books in this historical mystery series you can get away without studiously going through this book's predecessors, however be warned that while the case is a standalone, story arcs of the characters are carried over (but the books seem to move at such a slow pace regarding the personal lives of characters that it's not a massive issue). Wrexford and Sloane's impending nuptials lurk on the horizon. Hoping for a more relaxed few weeks leading into the big change, our happy couple's hope for more peaceful times is dashed to the curb when a renowned botanist keels over at a symposium. While at first glance it seems to be heart difficulties, a careful eye puts the death down to poison and therefore unscrupulous deeds of cunning and malevolence are uncovered. Struggling with her role as a satirical artist, Sloane questions the moral standing of her anonymous pseudonym and whether her future elevation to a countess will (or already is starting to…) affect what and who she targets with her quill. When a past nemesis crops up with nefarious plans once again, Sloane decides that she and Wrexford must try to right wrongs and ensure that those involved with a slew of evil deeds aren't left unpunished.

While this series has a scientific thread through every book, this one had a slightly different spin with the focus being Botany, specifically medical breakthroughs, with the Royal Botanic Gardens as a focal point. Personally, I loved this as it gave another interesting take on regency times and scientific breakthroughs that didn't overly focus on the technical nor mechanical like the previous installments in this series. I still found, similarly to the last couple of books, that Sloane's artistic contribution seems to be left by the wayside to a large degree, but at least in this book there was the mention of a couple of her satirical pieces. It was definitely still lacking this dimension, though, , which I find a shame as the blending of Art and Science is one of things I fell in love with about this series.

As with some of the previous books, some of the suspects that I thought would be focussed on more heavily weren't, going as far to set them aside relatively early in the story. This wasn't a negative in this book - just an observation. Charlotte finally has the long-awaited reunion with her brother and it was done well. The romance between Wrexford and Sloane, while still not a major focus of the book (I'd actually love there to be a greater focus on this as they seem to spend hardly any time together), lets us get a glimpse into their nuptials. I have to admit, I didn't think this would happen as I neared the end of the novel. I thought the author might cop out again and drag the event over to the next book or skip over it entirely but I'm happy to report that while not excessive, the reader does get to dip a toe into their world for a teeny bit.

The secondary characters continue to be a solid factor in this series. I found this book seemed to almost shove the concept that love and family aren't necessarily connected to blood down reader's throats. I thought it was pretty unnecessary because if you're a fan of the series, you would pretty much know this by now as it's cropped up several times in previous books. We get it, they've made a family through close friends, etc. My favourite characters, The Weasels, while featured regularly in this story, didn't seem to have as large a focus as other books, but they were still wonderful. It was just missing some of their quirks that have been more detailed in the past. Sheffield and Cordelia are still skirting around one another and I really hope this doesn't continue to get dragged out as it's coming pretty close to a cliché as well as having the possibility to become overly tedious. One thing I will say regarding the characters is a completely out of the ball park decision by a series regular. I won't go in to too much detail other than to say it was one of the reasons I took off half a star. How a character who has been weaved into the story arc as being a solid, logical, well-rounded individual who's normally the voice of reason makes a questionable (and, quite honestly, out of character, stupid) decision that results in those they hold dearest being put in danger and the culprits getting away is just beyond me. It stood out like a solar flare and one of the Weasels questioning the logic of this decision just highlighted how absolutely ludicrous it was. It went against everything the character has been portrayed as, including their behaviour in the first half of the book - it was almost as if someone else wrote it. Anywho, there it is.

In my review for the last book I wrote that the vocabulary being used by the author was getting a bit repetitive and stale. Thankfully, apart from the shirred eggs which is apparently the only thing ever eaten for breakfast, there was some fresh text and hardly any of the usual catch phrases. *Insert audible sigh of relief here* One thing that did repeat was one of the characters being in danger as they all seem to be getting a turn. Well, you can scratch another one off your bingo card. Dear author - you're running out of characters to throw in the deep randomly and while I appreciate the drama, I worry about it seeming forced rather than 'new' because it's a different character with their neck on the line. There was also the usual 'here's how the evil folk were going to do it' speech where someone is lucky enough to overhear all of the minute details that rests everyone's minds at ease as well as there not really being any great surprise as to who the perpetrators were because there were clues left the size of a semitrailer.

There was a good balance of story and historical and scientific detail once again in this novel, as well as its share of action and intrigue. The characters seem to be written in a way that makes them a bit less connected to the reader. I'm not really sure why. Maybe there's a slightly lesser focus on the depth associated with main characters now because it's an established series? I don't know. There's a little less punch, but I'm still loving the series. There was a good lead up to the capture of the antagonists that I thought was executed well and the book finished on a high note. I’ll be continuing with the series for sure.
Read more
19 people found this helpful
Report abuse
See all reviews
Back to top
Get to Know Us
Make Money with Us
Let Us Help You
And don't forget:
© 1996-2022, Amazon.com, Inc. or its affiliates