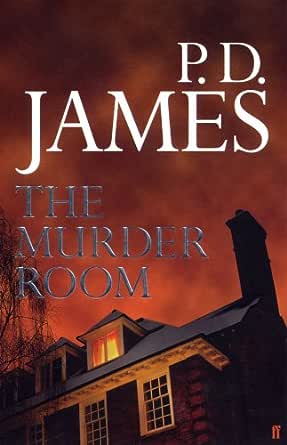 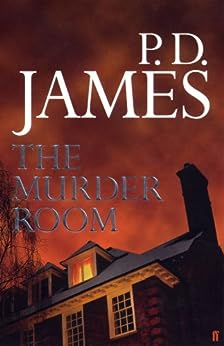 'Each new book gives pleasure not just for macabre crimes or ingenious solutions, but its intensity of experience'. Malcolm Bradbury, Mail on Sunday

Ian Robert Kerr
5.0 out of 5 stars A chilling account but well worth a read
18 May 2015
Format: Kindle EditionVerified Purchase
People like me who are afraid of fire will find this book confronting. The plot is complex and involves many characters, some of whom are added to the list of victims. This is one of the later books in the Adam Dalgliesh series and by this time his character has been well developed.
Read more
Helpful
Comment Report abuse

serenity
5.0 out of 5 stars A visit to The Murder Room
30 October 2015 - Published on Amazon.com
Verified Purchase
In my opinion, The Murder Room is one of P. D. James' best. All her stories begin at a slow pace, moving carefully and comfortably to construct a complex background of place and characters. Her style is almost conversational in the beginning chapters, and the reader begins to feel quite well acquainted with all the characters-- even the detective and his team members-- their lives, their habits, their thoughts, tastes, and ideas. James is a master at withholding the slightest hint that would point in any one person's direction. James herself has said in interviews that place is very important to her, and she is meticulous in her descriptions. So she takes her time. But when the action begins, the pace quickens, and suspense builds.

The setting for The Murder Room is London, and she gives a warm and even affectionate picture of the city.
The plot is centered on a collection of memorabilia in a museum dedicated to the era between the two world wars. One room in the museum called "The Murder Room," contains newspaper stories, and objects connected with famous crimes during that era.
Adam Dalgliesh is called upon to solve a series of murders that seem to be copycats of some of the crimes in that room.
James leads the reader through the complexity of interactions between the characters: Members of the family who own and operate the museum, their staff, Dalgliesh and his team.

James is meticulous in her research and flawless in her presentation. Her style is articulate and well thought out.
The Murder Room is a very good read.
Allow yourself plenty of time to enjoy it.

Elizabeth Harris
4.0 out of 5 stars A good, easy mystery.
20 November 2016 - Published on Amazon.com
Verified Purchase
This author likes to set up the characters by giving lots of information about their lives and how they interact with the other characters in the book. You know and understand the characters by the time the crime (s) is committed. I like the way Dalgliesh interacts with the characters including his police staff. I find the Dalgliesh series slow reading in the beginning but once the police are involved, the pace picks up considerably.
The characters seem like real people with problems that are quite possible. The police use common sense deduction to understand and solve the crime. You never really know who committed the crime until the end of the book.
Read more
3 people found this helpful

Shirley Y. Thomas
4.0 out of 5 stars PD James one of the best
18 July 2016 - Published on Amazon.com
Verified Purchase
PD James always delivered a great read, and The Murder Room certainly meets the standard. I read once that she admitted to being a little in love with her principal creation, Adam Dalgliesh. I can believe it. The mystery is satisfying although I guessed who the killer was well before the climax. But what struck me was the time and care James took at the conclusion of the book to write a big finale involving Dalgliesh's love life. I would have been content without the romance, but the author seemed to want her protagonist to be happy as well as clever.
Read more
2 people found this helpful

Celia A. Sgroi
4.0 out of 5 stars Not her best, but still a good read.
2 April 2004 - Published on Amazon.com
Verified Purchase
One thing about P.D. James that never ceases to amaze me is how she can fill a novel with unpleasant characters and somehow make you want to know what's going to happen to them. In THE MURDER ROOM, a specialist historical museum controlled by the three children of its founder provides the source of conflict and the scene of the crime(s). The offspring must vote whether to keep the museum alive or wind it up. Two of them are invested in its continuation, while one wants to get rid of it. The vote to keep the museum going must be unanimous-- so you know who victim #1 is going to be. After the murder, Cmdr. Adam Dalgliesh and his investigators move in, disrupting whatever might be left of normalcy for the museum, its owners, and staff.

As usual, every character has a secret to keep hidden, and their efforts to keep private things private complicate the investigation. When a second corpse is found in the murder room (an exhibit in the museum), the pace of pursuit picks up, as does the feeling of doom surrounding the entire institution.
There are plenty of suspects, but the story bogs down a bit in a strange sex-for-hire scheme that turns out to be one of the skeletons in the museum's closet. When the murderer is finally revealed, it's kind of difficult to figure out exactly what the motive was. Everyone else seemed to have much better reasons for committing the murders!
While all this is going on, Dalgliesh continues to brood over his on-again, off-again love relationship with one of the characters from the previous novel, DEATH IN HOLY ORDERS. Will he or won't he? In the end, that ends up being more suspenseful than the murder mystery.
Read more
7 people found this helpful