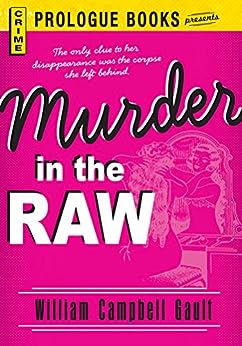 Douglas J. Bassett
3.0 out of 5 stars Solid Professional Piece of Work
Reviewed in the United States on 11 November 2013
Verified Purchase
Brock Callahan's first case involves trying to track down the stripper girlfriend of an ex-prizefighter. As tends to happen in cases like this, his investigations soon reveal the low crime has "higher" implications, as it has affected a rich and politically powerful family in Beverly Hills.

It's a damn shame Amazon doesn't allow for 1/2 stars, for this is a 3 1/2 star book if I ever read one. It's better than "okay" but I'm not sure I'd give it four stars, either, which to my mind is reserved for pretty impressive stuff. This is more "an exceptionally solid, craftsman-like piece of work". It is what it is, a basic PI adventure, and it never really goes beyond it's formula. It's just a damn good example of the formula.

Unlike say Frank Kane, it never feels completely formulaic -- Gault cared enough about the material to work in some grace notes here and there like running gags (a counterman obsessed with football) or interesting character sketches (a minor villain, a corrupt lawyer with a very plausible surface.) One knows, reading it, that somebody with wit and intelligence wrote it. Unlike say Gil Brewer the psychology never seems off -- Gault's characters all react more or less plausibly, given the circumstances they find themselves. Even when they behave oddly, Gault takes the time to justify it: so, for instance, Callahan gets involved in a couple of scraps, mostly out of impulse, but at least he has the good sense to call himself a damn fool afterwards. I also like the nuanced portrayal of the cops here, they're not exactly bad guys but they're not Callahan's friends, either.

Gault has often been called a Ross Macdonald-lite. I've never quite understood the comparison, you can't get much lighter than Ross Macdonald in this genre and Macdonald's own themes are so unique to him that you can't really compare him with any other writer in the field. If all that's meant is something like "Gault sort of reminds me of some of the Lew Archer books" well then, yeah, okay, but there were a lot of PI writers during this time writing softer, more plausible sort of PI stories, that's not unique to Ross Macdonald or Gault. Gault's Callahan is likable enough, I tend to prefer my PI's with more of an edge and so I doubt I'll ever become a raving fan, but this is certainly recommended.
Read more
2 people found this helpful
Report abuse

Dave Wilde
4.0 out of 5 stars the Quintessential Southern California Detective
Reviewed in the United States on 18 December 2014
Verified Purchase
"Murder in the Raw," first published in 1955, was the first of fourteen Brock Callahan novels by William Campbell Gault. Brock "the rock" was a former Rams football player who had to retire early due to a knee injury and sets up shop in Beverly Hills as a private eye.

The setting for these novels is pure 1950's Southern California with the palm-lined streets, the Beverly Hills pool parties, the low-rise apartments, the wanna-be-actors and actresses and generally low-key atmosphere. Unusual for a 1950's PI, Brock wants to get along with the police and often works closely with them. These novels are quite easy reading and you will find yourself halfway through them before you even bother to look up. They are not filled with flowery descriptions or dense, complicated plotting. But, they are certainly good stories. Gault was first and foremost a storyteller and he could spin a yarn.

What could go wrong when a washed-up boxer who used to headline at the Olympic Auditorium walks into Brock's office and asks him to locate a missing dame? The story takes Brock into a world of murder, Hollywood agents, Beverly Hills pool parties, after-hours clubs, hot rod tough guys, and hoods. Brock gets into a few brawls, but also seems to spend a lot of time traveling through the Southern California streets, attending pool parties, and mixing it up with the locals before getting to the bottom of the story of the boxer, the missing woman, and the dead body in the hot-pillow motel room.
Read more
2 people found this helpful
Report abuse

Mary Ann Rogers
5.0 out of 5 stars Non-stop goodness!!
Reviewed in the United States on 28 August 2016
Verified Purchase
I thoroughly enjoyed this book, but I've always loved good mysteries and this one is great!! It grabs you from the very beginning and never let's go. Will be reading more from this author in the future.
Read more
Report abuse
See all reviews
Back to top
Get to Know Us
Make Money with Us
Let Us Help You
And don't forget:
© 1996-2021, Amazon.com, Inc. or its affiliates