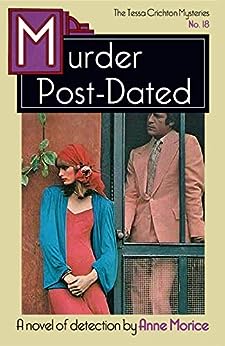 by Anne Morice (Author) Format: Kindle Edition
See all formats and editions
Sorry, there was a problem loading this page. Try again.

"I should warn you that it is not a pretty story."

"Stories about murder rarely are."

Nobody knows who started the rumour that James McGrath murdered his wife Rosamund. Certainly no one had seen her in a while, and she had gone off to visit a sick cousin without mentioning a trip to the neighbours. Still, everyone was inclined to accept the story - that is, until one of the neighbours meets the cousin in town, in excellent health and eager for news of country cousin Rosamund. Tessa Crichton, a guest in the Oxfordshire locale, is fascinated by this series of events. Fascination soon turns to a neat bit of detection when someone comes to her with a very strange confession.

Dipping into the case with relish, Tessa soon suspects there's murder mixed up in the mystery. But until she comes up with a body - or two - no killer can get just deserts.

Murder Post-Dated was originally published in 1983. This new edition features an introduction and afterword by crime fiction historian Curtis Evans.

'The fun lies in the style, light and sweet as a soufflé." Daily Telegraph

Anne Morice, née Felicity Shaw, was born in Kent in 1916. Her mother Muriel Rose was the natural daughter of Rebecca Gould and Charles Morice. Muriel Rose married a Kentish doctor, and they had a daughter, Elizabeth. Muriel Rose's three later daughters-Angela, Felicity and Yvonne-were fathered by playwright Frederick Lonsdale. Felicity's older sister Angela became an actress, married actor and theatrical agent Robin Fox, and produced England's Fox acting dynasty, including her sons Edward and James and grandchildren Laurence, Jack, Emilia and Freddie. Felicity went to work in the office of the GPO Film Unit. There Felicity met and married documentarian Alexander Shaw. They had three children and lived in various countries. Felicity wrote two well-received novels in the 1950's, but did not publish again until successfully launching her Tessa Crichton mystery series in 1970, buying a house in Hambleden, near Henley-on-Thames, on the proceeds. Her last novel was published a year after her death at the age of seventy-three on May 18th, 1989. --This text refers to an alternate kindle_edition edition.