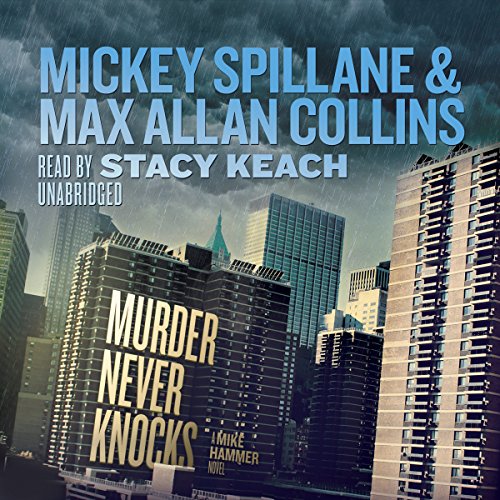 Dave Wilde
5.0 out of 5 stars Deadly assassins, Curvaceous Ladies, and More
Reviewed in the United States on 9 March 2016
Verified Purchase
When Spillane first published his Mike Hammer novels, they sent a shockwave across the country with their explosive violence, Hammer's frank attitude towards sex, and his relentless no-quit attitude. Big, tough, ugly, Hammer stood tall against killers, mobsters, Communists.

Spillane put out thirteen of these gems in his lifetime and thus far Collins has combed through Spillane's notes and outlines and bequeathed us another eight classics, which are a tribute to Spillane's work and feature the explosive violence of the original Hammer novels and the long lustful love affair Hammer had with his equally dangerous secretary Velda. At the end of the book, we get a handy chart putting all the original and post-Spillane novels in chronological order.

Murder Never Knocks does have the feel of a sixties-era Hammer novel between the hints of the hippie-dippie era of Greenwich Village with its painters and writers and the last breaths of the once all powerful families.

What really made this novel work for me were the lines about eyes trying to blink death away, the chest a tired beach ball slowly deflating, his face splashed with blood and bits of skull, and splitting a guy's skull "with blood and brains leaking out like he'd done a Humpty Dumpty off a nearby wall."

The Hammer character, described here as a wild-eyed and bloody-faced guy in a tailored business suit, was never known for being sunshine and roses and here he waxes on cynically about it being a pretty stinking world. But dark clouds are his bread and butter and there's nothing more menacing than Hammer strapping on his shoulder harness with his .45 loaded with high velocity bullet points. Just being tipped by one of those bullets, he explains, could turn a horse around. Hammer may be a target here, but he's still the grim avenger out to mete out a certain brutal kind of Justice. The hell with being politically correct and going by the technical points, Hammer is loaded for bear like no one else in private eye stories before or since has ever been.

In Hammer novels, men are men are women are voluptuous eye candy that Hammer can't get enough of.

In short, this may be a new Hammer novel, but it's filled with all that good stuff that we all loved about the original Hammer novels. For those of us who read all the originals backwards and forwards, it's really great to get new stories in the mold and spirit of the originals. There are some slower stretches in this book as the story gets rolling, but once the story really gets rolling it's hard to put it down. it's filled with lots of action and gunfire and ferocious activity and more than one sexy dame that Hammer cannot keep his hands off. Some of the descriptions in this book are really great.

All in all, a lot of fun to read.
Read more
9 people found this helpful
Report abuse

Richard B. Schwartz
5.0 out of 5 stars Seamless Fun
Reviewed in the United States on 31 March 2016
Verified Purchase
Murder Never Knocks is the newest Spillane/Collins collaboration. Mickey left a large number of partial manuscripts for his literary executor, Max, to complete. In this particular case, Mickey “had completed several chapters but also left behind extensive plot and character notes, as well as a draft of the novel’s ending” (p. 8). The book originally had three possible titles: Don’t Look Behind You, The Controlled Kill and The Controller. Working from internal evidence Max dates the novel in 1966-7 and he utilizes that timeframe when referring to actual historic individuals (Hy Gardner, e.g., appears in the novel), material culture phenomena, brand names, and so on.

The plot is straightforward: someone is trying to murder Mike Hammer. In fact, many people (one after another) are trying to kill him. This all appears to be related (in, as yet, unknowable ways) to Mike’s taking the assignment of protecting the attendees of a starlet’s wedding shower at the Waldorf. Hired by her (much older) fiancé, Mike has some reservations. A bit movie actor who has become a B movie producer, the man may have some dark places in his 50 year background. The story then becomes Mike’s efforts to fend off assassins as he investigates the potential reasons behind their hiring. This leads to a (SPOILER) literal cliffhanger ending. Well, not exactly a cliffhanger, more of a 6” ledge hanger on the 8th floor of an apartment building in Washington Heights.

Mike is aided in his efforts by Pat Chambers and the lovely Velda, whose many charms are described at length and in detail. Bottom line: this is a standard (i.e., model) Mike Hammer story. Manhattan is described with sufficient richness to be a fourth principal character and Mike exhibits his sweet, violent, politically-incorrect ways. The book thus recalls a time when a man could call his girlfriend ‘Kitten’, light up a Lucky, load his .45 with hollow point rounds and take on the world, at least the world of a gritty island in New York. As always, in these collaborations, the plotting is seamless. Mickey chose the right person to complete his work.
Read more
4 people found this helpful
Report abuse