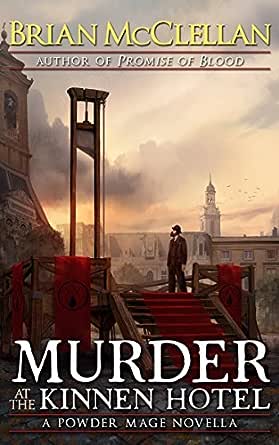 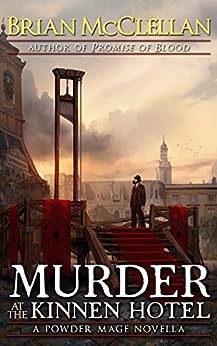 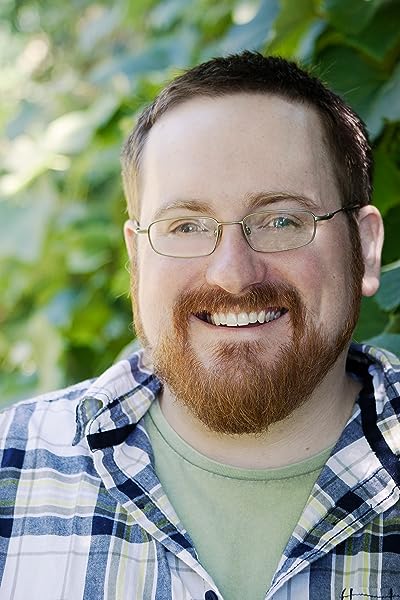 Special Detective Constable Adamat may be the most capable young investigator in all of Adopest. He's sharp, thoughtful, and his particular sorcery gives him a flawless memory. A transfer to the First Precinct seems like the perfect opportunity to showcase his abilities and advance his career.

But things work differently in the First Precinct. The murder of a businessman's mistress quickly pulls Adamat into an unexpected world of conspiracy and politics where he's forced to use all his wits to stay one step ahead of unseen enemies and keep his friends—and himself—from the guillotine.

Occurs twenty-two years before the events in Promise of Blood.

E. Nolan
3.0 out of 5 stars Adamat On The Hunt
6 January 2018 - Published on Amazon.com
Verified Purchase
This novella is a prequell to the main "Powder Mage" series and
details the work of (then) Special Detective Constable Adamat to
solve two politically charged murders, one involving his friend
Ricard Tumblar (future First Minister of the as yet uncreated
Republic). To do this he must accept deadly help from one of the
Cabal's enforcers and somehow overcome a rogue Powder Mage.

I have to admit that Adamat has always been my least favorite main
character in the series, but it's an entertaining enough story, and
perhaps foreshadows why is not still on the force as the main series
begins.

RobH
5.0 out of 5 stars Another great short story in the Powder Mage Universe
27 November 2014 - Published on Amazon.com
Verified Purchase
Between each of the major books in Brian McClellan's Powder Mage Trilogy, McClellan has written short stories and novellas which help provide a little more insight and back story to the characters we see much more of in the full novels. "Murder at the Kinnen Hotel" is McClellan's latest work, and focuses on the character of Adamat, a character we see as a private investigator in the novels.

Set over 20 years before "The Promise of Blood", the story introduces us to a much younger, and also a much brasher, version of Adamat, new in his position of a detective in the First Precinct of Adopest, where he's recently moved. Starting from interactions with more senior officers in the precinct, we follow Adamat as he attempts to unravel a case that gives us his connection with a non-POV character from the books - Ricard Tumblar. Over the course of the story, Adamat has various run ins with different characters, some good for his progressing the plot and some bad, and certainly demonstrates that he has an amazing ability to get into difficult situations.

If you've read any of McClellan's other Power Mage Novellas, then you'll know what to expect with this. It probably wasn't much more than an hour or so's reading, but held me enthralled throughout, and is a great piece to lay as a breadcrumb towards the last novel in the trilogy due for release in March. This is a great detective story in itself though, and highly recommended for anyone who has enjoyed McClellan's other work.

Definitely hoping that there's another short story or novella coming from McClellan in the not too distant future.
Read more
4 people found this helpful

One Man Book Club
4.0 out of 5 stars Prequel Power
7 April 2015 - Published on Amazon.com
Verified Purchase
So, I started reading Promise of Blood and found it as advertised: “Just Plain Awesome.”

It’s pretty grand in scope, however, and I felt a little unsettled with all the characters.  Who are the good guys?  Who should I be rooting for?  Who’s on whose side?  About 150 pages in I discovered that there were 6 short, novella-sized prequels to Promise of Blood.  I’ve had good experience with prequels adding value to the story in the past, so I went ahead and downloaded all 6 of them.

Pat my myself on the back.  I was a great decision.

These 6 prequels give backstory and understanding to each of the key players I’ve run into so far in Promise of Blood.  All six are well written, entertaining stories by themselves.  Of course, you’ll be able to follow the story in Promise of Blood—and enjoy it—just fine without reading the prequels.  But, man, they sure did add a lot of color to the picture I was trying to form.  The characters weren’t characters anymore—they became people.  Now that I’ve finished prequels and I’m back into Promise of Blood, I’m emotionally invested in this story that seems to be pushing past awesome to all the way to completely amazing.

They aren’t numbered, so you’ll need to know what order to read them to have the most effect.

1. Foresworn
2. Servant of the Crown
3. Murder at the Kinnen Hotel
4. Hope’s End
5. The Girl of Hrusch Avenue
6. The Face in the Window

My recommendation?  Don’t read Promise of Blood without reading the prequels first.
Read more
One person found this helpful

I got really excited with each short story that I purchased while waiting for The Crimson Campaign, and tried my hardest to piecemeal them to myself so as not to read them all in a rush and have nothing to tide me over until The Autumn Republic's release in February. Unfortunately, that lasted...for about a few hours until I read them all in a day. Luckily, being the awesome guy that he is, Brian keeps releasing them! And honestly, as far as I'm concerned, the quality never falters, and if anything improves with each story.

OKAY, now that I've gushed, time for the actual review of the story. We've gotten glimpses into pasts of Tamas and Taniel, two of our main POVs in the trilogy, and are finally getting our own Adamat story! This is great, because I found that I wanted to know Adamat's back story the most out of the three, especially due to his service in the police force and his relationship with Ricard. I wasn't disappointed at all. You get a cool little murder mystery to start with that feeds into an entirely different and larger mystery to unravel, and Brian writes it really well. Adamat is awesome because even though his Knack allows him to remember EVERYTHING, which of course makes him effectively the perfect detective, but he's also rash and makes quick decisions without thinking of the consequences. This is something brought up in the story and was great to see, because it's an offset to the Knack and helps make him flawed in a believable and good way.

If you liked the other Powder Mage novellas, I easily recommend giving this one a go. The length is wonderful, it's well paced, and over all it's just a fun read. If you didn't like the other Powder Mage novellas for some reason (Characters/Story/Whatever, you're crazy) I would still give this one a try solely because it's different enough from the others in that you're not fighting your way through the system, you're doing some cool detective work around it with Adamat instead. Seriously, check it out.

P.S. - Not entirely sure, but I think he may have thrown in another character's origin in there. Not going to spoil it for anyone, but if you end up reading it, see if you can find it/agree with me on that one?

P.S.S. - Brian, I'm still totally holding out for an Olem short story. Just saying.
Read more
3 people found this helpful
Go to Amazon.com to see all 33 reviews 4.5 out of 5 stars
Get FREE delivery with Amazon Prime
Prime members enjoy FREE Delivery and exclusive access to movies, TV shows, music, Kindle e-books, Twitch Prime, and more.
> Get Started
Back to top
Get to Know Us
Make Money with Us
Let Us Help You
And don't forget:
© 1996-2020, Amazon.com, Inc. or its affiliates