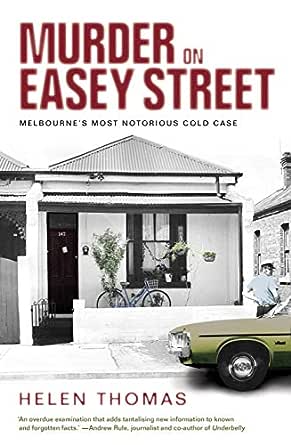 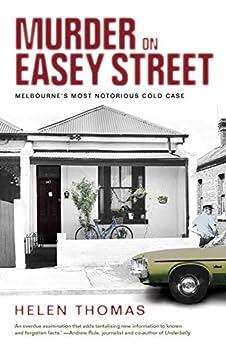 ‘An overdue examination of the Easey Street murders that adds tantalising new information to known and forgotten facts.’ Author: Andrew Rule, journalist and co-author of Underbelly

1977, Collingwood. Two young women are brutally murdered. The killer has never been found. What happened in the house on Easey Street?
See all Product description

Pop culture man
5.0 out of 5 stars Justice for two young women
Reviewed in Australia on 22 March 2019
Format: Kindle EditionVerified Purchase
In 1977, In Melbourne, one of Australia’s most horrific crimes occurred. Two young women, Suzanne Armstrong and Susan Bartlett, were viciously stabbed to death in their home while Suzanne’s infant son was in a nearby room. He stayed there for two days until the dead were discovered.

In this book, Helen Thomas undertakes a thorough re-examination of the crime, looking again at every shred of evidence, every rumour and innuendo, every theory of the crime and its perpetrator.

She interviews several people who gave statements to police at the time of the crime, surviving relatives, including Suzanne’s son and some of the investigators. A significant achievement is bringing out the victims’ characters and personalities through interviews with people who knew them well.

There’s an obsessive air about Thomas’s efforts, indeed the book is a cry from the author’s heart that the publication will prompt someone with new evidence to come forward so that the murdered women’s killer will face justice.

The book throws light on the state of murder investigations in Australia 40 years ago including an intriguing study of the role of the newspapers’ police roundsmen who worked very closely with the homicide detectives of the day.

Other intriguing chapters deal with the views of experts on what type of man could have committed such an atrocity and what approach should now be taken to further the investigation.

I recommend this book to all serious students of true crime.

MeThinks
5.0 out of 5 stars Great Aussie True Crime. Hope it’s solved one day
Reviewed in Australia on 20 October 2019
Format: Kindle EditionVerified Purchase
Enjoyed this Investigative journalist’s hard work and it’s a comprehensive read. Well written, I read it in a day. Would have been even better had the case to have been solved, but this book is the next best thing that is solid food for thought
Read more
Helpful
Comment Report abuse

Dan
3.0 out of 5 stars Informative book on such a shocking crime
Reviewed in Australia on 31 August 2019
Format: Kindle EditionVerified Purchase
Living in Melbourne I had often heard of the Easey Street murders and thought that this would be a good book to learn more about what occurred. The book is a quick read and served the purpose of covering the crime and theories on who may have been responsible.
Read more
Helpful
Comment Report abuse

Jennifer Cameron-Smith
TOP 10 REVIEWER
4.0 out of 5 stars ‘The saddest part of the Easey Street saga, with all its twists,...
Reviewed in Australia on 28 April 2019
Format: Kindle Edition
... is that the two young women have almost been lost in time.’

In January 1977, Suzanne Armstrong and Susan Bartlett were murdered in their home on Easey Street in Collingwood. Both women were stabbed multiple times as Suzanne’s sixteen-month-old son slept in his cot. Their murders have never been solved. Even though the police created a list of more than 100 ‘persons of interest’.

I don’t remember these murders, which is one of the reasons I picked up this book. Who were these two young women, how did they live, why were they murdered? Ms Thomas’s book gives me some sense of who Suzanne and Susan were and of their lives before they were so brutally murdered. Ms Thomas spoke with members of the Armstrong and Bartlett families, with some of their neighbours on Easey Street, with police officers and journalists. While Ms Thomas identifies several missed opportunities in the investigation, unfortunately there are no answers here. There is some hope that new more sophisticated DNA analysis and testing could lead to new lines of enquiry. I hope so.

Kindle Customer
5.0 out of 5 stars Thorough look at a gruesome double murder
Reviewed in the United States on 27 September 2019
Verified Purchase
This true crime book about the murder of 2 young women in Melbourne in the 1970s is well told. It's a very cold case but is definitely not forgotten by the public, the police, family and neighbors. The author discusses suspects, theories, how the original investigation was handled, and what's being done with DNA.

I recommend it to anyone interested in true crime and cold cases in particular.
Read more
7 people found this helpful
Helpful
Sending feedback...
Thank you for your feedback.
Sorry, we failed to record your vote. Please try again
Report abuse

Kindle Customer
4.0 out of 5 stars Intriguing
Reviewed in the United States on 30 September 2019
Verified Purchase
A well-written account of the murders and ensuing investigation. As it goes on, I found myself more and more frustrated by the seemingly bungled investigation and hoping that they would solve the case.
Read more
4 people found this helpful
Helpful
Sending feedback...
Thank you for your feedback.
Sorry, we failed to record your vote. Please try again
Report abuse

Terry Nelson
5.0 out of 5 stars A great true life cold case
Reviewed in the United States on 13 December 2019
Verified Purchase
This was the most intriguing true life murder mystery that I have read. Suzanne Armstrong and Susan Bartlett, two well-liked young women, who shared a small house in Melbourne, Australia, were murdered in their two bedroom house in January, 1977. There were no lack of suspects, including two men who were in the house not long after the girls were murdered, yet insisted they never saw the bodies. There were other suspects you can easily assume were the killer. It is difficult to pick just one. Yet all were cleared. One can not help but think one of them is the killer. Helen Thomas does a masterful job relating the events. This is one of those "I don't want to stop reading' books.
Read more
One person found this helpful
Helpful
Sending feedback...
Thank you for your feedback.
Sorry, we failed to record your vote. Please try again
Report abuse

MAP
3.0 out of 5 stars Interesting Enough
Reviewed in the United States on 29 November 2019
Verified Purchase
Though the murders remain unsolved, the book was quite interesting. Skimmed some of it but rather well written. Would recommend if you can accept that the killer remains unknown & at large.
Read more
2 people found this helpful
Helpful
Sending feedback...
Thank you for your feedback.
Sorry, we failed to record your vote. Please try again
Report abuse
Load more international reviews

Kindle Customer
5.0 out of 5 stars A mystery that leaves you wondering..
Reviewed in the United States on 15 December 2019
Verified Purchase
This book was well written & kept me turning the pages. I recommend this book to anyone who is into murder mysteries.
Read more
2 people found this helpful
Helpful
Sending feedback...
Thank you for your feedback.
Sorry, we failed to record your vote. Please try again
Report abuse

Julie
4.0 out of 5 stars Cold case Australia
Reviewed in the United States on 31 March 2019
Format: Kindle EditionVerified Purchase
I’d read a short story if this case before, so already knew the basics. This filled in more of the gaps. I liked that the author told me more about the victims and what they were like, since, in so many true crime books, the bad guy gets most of the attention. Very sad story with no answers yet. A very cold case !
Read more
Helpful
Sending feedback...
Thank you for your feedback.
Sorry, we failed to record your vote. Please try again
Report abuse