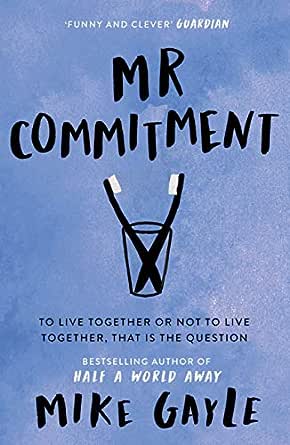 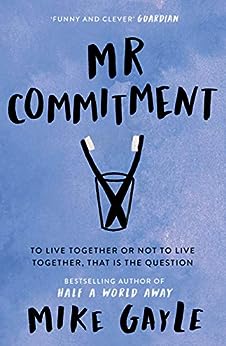 Previously an Agony Uncle, Mike Gayle is a freelance journalist who has contributed to a variety of magazines including FHM, Sunday Times Style and Cosmopolitan. He is hugely promotable, appeared at the Hodder roadshow and at the Edinburgh festival and is writing articles for press and magazines. --This text refers to an alternate kindle_edition edition.

Straight from the bestseller lists in the UK comes a novel "full of belly laughs and painfully acute observations" (The Independent on Sunday), an excursion into the world of a modern male that "delivers its punch lines directly to the heart" (Birmingham Evening Mail). Like Helen Fielding's smash success Bridget Jones and Nick Hornby's classic High Fidelity , Mr. Commitment promises to make a big splash this side of the Atlantic as well.

Benjamin Duffy is a stand-up comic/temp who, like many men in their late twenties, is forced to face the eternal question: "To commit or not to commit?" After four years of biding her time, Benjamin's girlfriend has proposed, issuing an ultimatum that sets Benjamin's head spinning. He knows that Mel's the one for him, but should he swap his stellar record collection and fridge full of beer for dinner parties and trips to IKEA? Maybe if Benjamin could swap "till death do us part" with "renewable on a four-year basis" he'd be happy, but the choice-as far as Mel sees it-is all or nothing. Now or never. Mel or no Mel.

So after a lifetime as Mr. Irresponsible, does Benjamin have what it takes to become Mr. Commitment? --This text refers to an alternate kindle_edition edition.

'Something near to mid-period Woody Allen...a delicate blend of realism and whimsy...funny and clever...refreshing to find a male writer working in this genre - Guardian on MR COMMITMENTTold in an easy, chatty style..the lighter moments in Mr Commitment say more about what s wrong with the modern twentysomething male than any amount of earnest introspection ever could - Express Comic...fizzy. Here comes the male Bridget Jones - Mirror on MY LEGENDARY GIRLFRIENDFull of belly-laughs and painfully acute observations - Independent on Sunday on MY LEGENDARY GIRLFRIEND --This text refers to an out of print or unavailable edition of this title.

No 1 bestselling author of MY LEGENDARY GIRLFRIEND returns with this wickedly observed second novel about modern relationships: does Mr Irresponsible have what it takes to become Mr Commitment? --This text refers to an out of print or unavailable edition of this title.

Previously an Agony Uncle, Mike Gayle is a freelance journalist who has contributed to a variety of magazines including FHM, Sunday Times Style, Just Seventeen and Bliss. He is hugely promotable, appeared at the Hodder roadshow and at the Edinburgh festival and is writing articles for press and magazines --This text refers to an out of print or unavailable edition of this title.
Read more

julie kirk
5.0 out of 5 stars Brilliant
Reviewed in the United Kingdom on 11 April 2020
Verified Purchase
Another amazing read by The author. I love his books.
Read more
Report abuse

Bubble
4.0 out of 5 stars Sweet
Reviewed in the United Kingdom on 29 June 2013
Verified Purchase
Sweet, light hearted, amusing and true to life. We all go through that stage which so clearly described in the book. The characters were funny, silly and likeable, not at all perfect in a good way.
Read more
One person found this helpful
Report abuse

Amazon Customer
5.0 out of 5 stars Funny every day life situations.
Reviewed in the United Kingdom on 29 June 2018
Verified Purchase
It was funny and life like as I am sure a lot of people have felt like this or been in a same situation. I have now started reading all his books.
Read more
One person found this helpful
Report abuse

Harvey Bei
4.0 out of 5 stars Funny and will pass around a few mates
Reviewed in the United Kingdom on 22 January 2017
Verified Purchase
I read this book over two days and it kept me laughing the whole time. A good read that I'd recommend to a few of my friends.
Read more
One person found this helpful
Report abuse

lynda duncan
5.0 out of 5 stars Five Stars
Reviewed in the United Kingdom on 26 September 2015
Verified Purchase
Throughly enjoyed this read, light and refreshing
Read more
Report abuse
See all reviews
Get FREE delivery with Amazon Prime
Prime members enjoy FREE Delivery and exclusive access to movies, TV shows, music, Kindle e-books, Twitch Prime, and more.
> Get Started
Back to top
Get to Know Us
Make Money with Us
Let Us Help You
And don't forget:
© 1996-2020, Amazon.com, Inc. or its affiliates