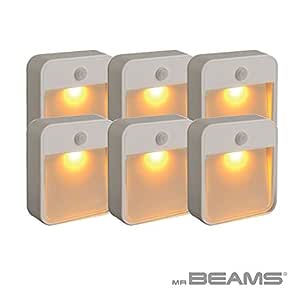 by Mr. Beams
4.0 out of 5 stars 1 rating
International product from outside Australia

Size Name: 6 pack size
Mr. Beams Amber Stick Anywhere Light was specifically designed to be a sleep-friendly night light. The amber LED is bright enough to provide safety lighting for bedrooms, hallways and bathrooms, but at 600Nm It’s soft enough to not disrupt sleep. Studies have shown that blue light suppresses melatonin, which affects our quality and ability to sleep, while red and amber light are conducive to sleep. The light is a twist on Mr. beams’ original stick anywhere light and contains the same key features: motion activation, automatic shut off, 1 year battery life and wireless installation.

GK
4.0 out of 5 stars Safety and convenience
25 August 2019
Size: 6 pack sizeVerified Purchase
Like: Eradicates danger of tripping on friendly cats in the dark, and amber light does not startle you awake when waking for brief bathroom visits. Located low down on skirting boards they are also potentially good fire emergency lights.
Dislike: A little hungry for battery power, but investment in rechargeables solves this in the long term.
Read more
Helpful
Comment Report abuse
See all 1 customer reviews
Write a customer review

Thomas Ott
2.0 out of 5 stars The Amber Light = GOOD - The Overall Product Design = BAD
26 September 2018 - Published on Amazon.com
Verified Purchase
I purchased the Mr. Beams MB720A because it produces a soft AMBER light.

I've tried a competitor's motion-sensing light that claimed to produce an "amber" light. However, the competitor product did not produce a true "amber" light (see photo). The Mr. Beams MB720A produces a soft and non-disrupting amber light; yet, it adequately lights a dark hallway or walking area.

If it was wasn't the bad design of the MB720A, the product would have earned a 5-star overall rating.

THE BAD
The physical design of the Mr. Beams MB720A is where this product falls down. I found four design elements that need improvement.

1) NO OFF/ON SWITCH: The MB720A does NOT have a simple ON/OFF switch. (The competitor product I tested does have an On/Off switch.)

Without a simple On/Off switch, (A) the product can not remain illuminated for specific occasions, and (B) the only means of stopping battery drain is to remove the unit from the wall and remove the batteries. (This is very inconvenient and increases battery cost - four AA batteries are required and they are not included.)

2) NO TIMER CONTROL: The MB720A does not have the ability for the user to control the amount of time the light remains on. The motion sensor turns off the light somewhere between 20 to 30 seconds of non-movement.

Depending on where the light is physically placed, there are times when a longer illumination period would be helpful (such as walking in long hallways). Also, there are times when the light is illuminated for an unnecessary duration, thus wasting battery life. A simple 10/20/30 second timer switch, as I've seen on other motion sensor products, would resolve light duration issues and save battery cost. (A competitor product I tested does have a timer control switch.)

3) MOUNTING PLATE: The MB270A mounting plate does not cover the entire back of the product. Instead, the mounting plate only covers half of the backside of the product, which makes it impossible to mount the product completely flush to the wall for a more "built-in" look. The manufacturing material cost to correct this design flaw would be less than one cent per unit.

THE CONCLUSION
The Mr. Beams MB720A produces a soft, non-disturbing AMBER nightlight. The amount of light produced by the required FOUR AA batteries is adequate to illuminate a walking area or small hallway, but the light is not too bright to disturb a sleeping partner.

If it wasn't for the designed flaws mentioned above, I would highly recommend this product. However, until these flaws are resolved, the Mr. Beams MB720A is on my "NOT RECOMMENDED" list.
Read more

Frederick
5.0 out of 5 stars Warm, motion-activated light that points downward = the perfect night light
7 March 2017 - Published on Amazon.com
Verified Purchase
Like most people, my wife and I occasionally get up in the middle of the night to use the bathroom. Our bedroom is essentially pitch black, so navigating your way around it at night could be... tricky. (One nearly fateful night we had suitcases on the floor for an upcoming trip. My wife, forgetting they were there, accidentally kicked one on her way to the bathroom. It made a VERY loud noise and scared the you-know-what out of me. Surprised I didn't end up in the cardiac cath lab. Anyway, after my pulse finally came back down below 100, I decided we NEEDED to get some night lights.)

After extensive research into different night lights I decided to purchase these. We placed two of them on the floor of the bedroom against two different walls and one on the floor of the bathroom itself (it's a large bathroom). Because they are on the floor they do not pick up any movement on the bed, but as soon as either of us steps out of bed they turn on and provide plenty of light on the floor, but because the light is warm and directed downward, it does not bother the other person who is still in bed. They all then turn off by themselves 20 seconds or so after they stop detecting motion.

And the best part is, I didn't even have to mount these on a wall (though doing so looks very easy). We just set them on the floor against the wall and they work perfectly.

Voila. No more stubbed toes, and no more scaring me to death at two o'clock in the morning.
Read more

Stu
4.0 out of 5 stars Immediately bought two more
8 December 2016 - Published on Amazon.com
Verified Purchase
I haven't even had this product a night yet and I've already ordered two more. I hate running night lights- I know they're not using much electricity but I LOVE sleeping in total darkness and even having a light down the hall running all night can disturb me. After years of doing it, I've just grown accustomed to it but every now and again there's just something amazing to sleeping in total darkness. That said, if you gotta get up and use the bathroom, so sorry, but without a bathroom night light you're probably not hitting the bowl.
In comes this guy, motion activated so it won't run all night, battery operated so it's not pulling unnecessary electricity all day, light-sensing so it won't go off during daylight.
I've noticed that the motion sensor isn't terribly wonderful- I pretty much have to be directly in front of it for it to go off- but set up in a hallway directly outside the bedroom, that shouldn't be an issue. I plan to set up another in the bathroom itself and then one in the kitchen.

If I could improve on this product, I'd offer the option to switch between 30 seconds, 1 minute and 5 minutes on the auto light-off feature. Just sayin', 30 seconds is a little short for your midnight bathroom run. Deducted one star because my toilet's 6 feet from the sensor and it couldn't sense me there so the sensor turned off after 30 seconds leaving me guessing for the end of the race. Either a better sensor or a longer timer option could've resolved this issue. Still a great product, can find a use for it in multiple other places in my home, so I will be buying (and have bought) again.
Read more
71 people found this helpful
Go to Amazon.com to see all 1,193 reviews 4.3 out of 5 stars
Get FREE delivery with Amazon Prime
Prime members enjoy FREE Delivery and exclusive access to movies, TV shows, music, Kindle e-books, Twitch Prime, and more.
> Get Started
Back to top
Get to Know Us
Make Money with Us
Let Us Help You
And don't forget:
© 1996-2020, Amazon.com, Inc. or its affiliates