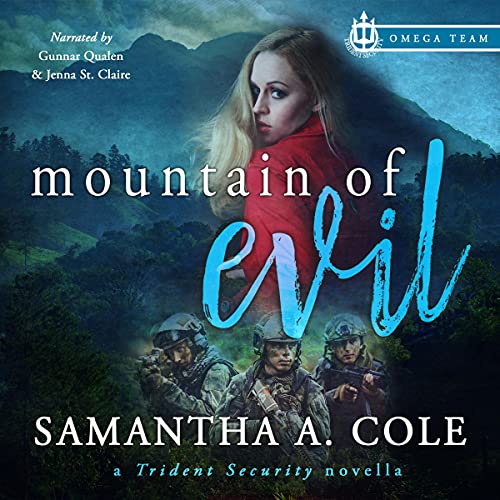 Between new clients and governmental contracts, Trident Security has grown by leaps and bounds. To accommodate the increased caseload, they’ve added a second team to their Tampa headquarters. After hiring seven “best of the best” from military and law enforcement backgrounds, they’ve put together a crackerjack group of six men and one woman. But before they’re turned out to handle their own missions, they must first prove they are a cohesive and capable unit.

Dropped into the Rocky Mountains, the Omega team has minimal supplies and only two days to make it back to civilization, but what they find in the wilderness turns the training op into a real one. Will they all make it back alive?

4.7 out of 5 stars
4.7 out of 5
104 global ratings
How are ratings calculated?
To calculate the overall star rating and percentage breakdown by star, we don’t use a simple average. Instead, our system considers things like how recent a review is and if the reviewer bought the item on Amazon. It also analyses reviews to verify trustworthiness.

I have been a huge fan of the Trident Security series from that very 1st book, and so many in, there isn’t a single story, where I don’t say to myself “this woman is insane and yet fricken amazing “, just when I think she can’t get any better, tada another book comes out and I’m left with my mouth open – again!

Mountain Of Evil, is the prequel to the new omega team – still part of the amazing Trident Security company, these men and badass women were all handpicked by Ian and Devon. Each member comes with a unique story of where they’ve come from and who they are in Trident Security, one we are given a glimpse of. I’m already loving them, for their terrible pasts and incredible strength moving forward.

Being dropped in the mountains as their 1st training mission together, should have been an easy couple of days (even though, it is tough terrain and let’s face it setup by Ian – it will never be easy), but when a trek turns to a missing woman, their skills are tested trying to find a woman in freezing temperatures and no clue where to find her. Stumbling across her, and the hours that follow the team will pull together to not inly save their own lives, but the life of a young women and try to capture the kidnappers. Not turning out the way they’d hoped, not everyone will make it out alive.

Only the fittest and best can work at Trident , and these men and women will make their mark. Another great addition to the Trident Security series, Mountain Of Evil will have you laughing, cringing, gasping and wanting to finish in one session. I love bad ass men, but badass women rock! I think miss Cole should be one!
Read more
One person found this helpful
Helpful
Report abuse

Rhianona
4.0 out of 5 stars great intro to a new series
Reviewed in Australia on 2 December 2017
Mountain of Evil is the prequel to Samantha A. Cole's Trident Security Omega spin off. Omega team has been training with Trident Security's other teams and this last training trip is to make sure that they can operate as a team on their own. To do this, they've been dropped into a remote area of the Rockies in Colorado with minimal equipment. But almost as soon as they begin, they find out that a local woman is missing. Mallory Hart disappeared without a trace while hiking.

Ms Cole has done a fantastic job in setting up a nice bridge between her two series. While it is not necessary to have read the Trident Security series, you may gain a better appreciation for the characters if you do so. This is a fast paced thriller, with Ms. Cole introducing each member of Omega team and providing the reader with some hints as to future plots with them. There is plenty of action as well - both of the physical and carnal kind.

I found myself quickly sucked into the plot and enjoyed the characters. My two complaints are minor and one is definitely idiosyncratic. Ms. Cole used this book to introduce us to the members of Omega team and some of those introductions felt stilted or pedantic. I also didn't love that she wrote the flashback scenes in first person. It threw me out of the scene.

However, with those caveats, this is a strong prequel and I am eager to go and read the Omega Team books as the characters sounds like a lot of fun.

NB: I received a free copy of this book from the author.
Read more
Helpful
Report abuse

My Books
5.0 out of 5 stars Introduction to more fun
Reviewed in Australia on 13 October 2019
Mountain of Evil, is a great introduction to the The Trident Security Omega Team. Can't wait to getting to know each team member better in future books. It was also a nice catch up wit Ian & Angie.
Read more
Helpful
Report abuse

KM Lowe
5.0 out of 5 stars Good!
Reviewed in the United Kingdom on 17 November 2017
Verified Purchase
When I finished the original trident series I was like, "what am I gonna do now?" Then I noticed there was this spin off. Well I was like, "hell yeah!" However, after the first nine books I was wondering if anything could be left to keep us entertained, even though the characters were amazing! Well, I didn't need to worry about that, because this book was really good, if not better than the original series. Now, I can't wait to go onto the next book, because I have a feeling that the Omega team are going to be more about the action and security detail, which is what makes this whole franchise of books.
Read more
Report abuse

Christina Race
5.0 out of 5 stars This book is really good, lots of tense action
Reviewed in the United Kingdom on 6 May 2017
Verified Purchase
This book is really good,lots of tense action,I read it in one go,I'm glad they saved the girl,this team are as good as trident security team the sexy six pack,can't wait till they find out who is killing the subs,xxx
Read more
One person found this helpful
Report abuse

Sue Barter
5.0 out of 5 stars nothing
Reviewed in the United Kingdom on 4 February 2019
Verified Purchase
excellent story
Read more
Report abuse
See all reviews
Back to top
Get to Know Us
Make Money with Us
Let Us Help You
And don't forget:
© 1996-2021, Amazon.com, Inc. or its affiliates