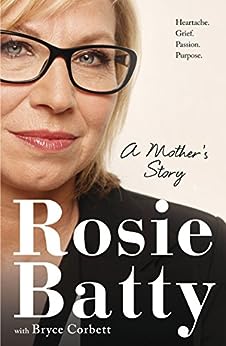 
Rosie Batty knows pain no woman should have to suffer. Her son was killed by his father in a violent incident in February 2014, a horrendous event that shocked not only the nation, but the world. Greg Anderson murdered his 11-year-old son Luke and was then shot by police at the Tyabb cricket oval. Rosie had suffered years of family violence, and had had intervention and custody orders in place in an effort to protect herself and her son. Rosie has since become an outspoken and dynamic crusader against domestic violence, winning hearts and mind all over Australia with her compassion, courage, grace and forgiveness. In January 2015, Rosie was named Australian of the Year, 2015. Inspiring, heartfelt and profoundly moving, this is Rosie's story.

A percentage of royalties from sales of this book are going to the Luke Batty Foundation.

'Every Australian should read this book' Tracey Spicer

'This highly emotional book ... She suffers but she is not a victim.  Batty is comforting and terrifying.  She is protector and avenger... She has moral authority and dignity  ... compelling' ABR

A profoundly moving and inspiring memoir from Australia's domestic violence crusader, Rosie Batty. --This text refers to the audioCD edition.

In an incident that shocked Australia, Rosie Batty's 11-year-old son was killed by his father in a violent incident in February 2014. Greg Anderson murdered Luke Batty at cricket training and was then himself shot by police. Rosie has since become a passionate campaigner on the issue of family violence. She won the Pride of Australia Award in 2014, and was named Australian of the Year in January 2015.

4.6 out of 5 stars
4.6 out of 5
159 global ratings
How are ratings calculated?
To calculate the overall star rating and percentage breakdown by star, we don’t use a simple average. Instead, our system considers things like how recent a review is and if the reviewer bought the item on Amazon. It also analyses reviews to verify trustworthiness.

Catmistress
TOP 500 REVIEWER
5.0 out of 5 stars A Book That Shouldn't Have Been Necessary
Reviewed in Australia on 3 October 2015
Verified Purchase
Today, Rosie Batty should have been a mother happily raising her son Luke in the semi-rural Victorian town of Tyabb. Instead, following the brutal murder of Luke by Ms Batty's ex-partner, she is Australian of the Year and a fierce advocate for change, both legal and societal, in the area of domestic violence.
This book will answer all the "but how...." and "but why..." questions that people may have about the events leading up to that horrible fateful day, on the day and after. It is not an easy subject to read about, but if people have to live with domestic violence day in day out, then taking two hours out of my life to make an effort to understand what some go through is the least I can do.
Luke's murder was and is a tragedy, and it is a tragedy that this book is necessary.

Sandra Dee
5.0 out of 5 stars Sad & Shocking
Reviewed in Australia on 12 May 2017
Verified Purchase
R.I.P Luke Batty
Sad & tragic story which was well written. Rosie did everything she could to protect her son. Luke should still be here. STOP FAMILY VIOLENCE
A credit to Rosie for becoming a spokesperson for DV prevention to honour her beloved son. Rosie has great strength. Much love to Rosie x
Read more
One person found this helpful
Helpful
Report abuse

Maree Willmore
5.0 out of 5 stars Mia
Reviewed in Australia on 5 August 2018
Verified Purchase
How anyone could read this book and not be moved by it would be unimaginable ... A very well written and deserved read. Bad things happen to good people. So sad though because this terrible murder could have been prevented. The police do the best they can, but then the court system lets the perpetrators off to continue to terrorise their families. A must read. R.I.P. Beautiful Boy. Good Work Rosie
Read more
Helpful
Report abuse

Lyndi W.
5.0 out of 5 stars True life horror story
Reviewed in Australia on 8 November 2017
Verified Purchase
I had always thought I had some understanding of family violence being the partner years ago of a man who was a psychopathic liar and heavy drinker. I was lucky to have family support to help me with life as a single working mother.
This book is beautifully written - more like reading an unbelievable thriller than an autobiography.
I have a much better insight into how the tragedy of losing Luke came to be and have nothing but admiration for Rosie sharing her story.
Read more
One person found this helpful
Helpful
Report abuse

Katiek
5.0 out of 5 stars Rosie Batty is an Inspiration and this book was full of courage and bravery
Reviewed in Australia on 5 September 2018
Verified Purchase
I couldn’t put this book down. After hearing about the loss of Luke and the domestic violence that Rosie and Luke endured, I realised I needed to read it. As a survivor of domestic violence myself, this book his too close to home but was a lovely reminder that we can use the horrible tragedies in our life to inspire us to create change and honour all those who have been lost to domestic violence, like luke. May he Rest In Peace and May Rosie find peace and be forever aware that Luke will always be with her.
Read more
Helpful
Report abuse

Deirdre Robinson
5.0 out of 5 stars A mother's constant love for her child
Reviewed in Australia on 2 August 2017
Verified Purchase
This book reveals a frightening scenario in relation to the inability of protection organisations such as police and child protection to coordinate information in this day of internet accessibility and so allow such violence to be perpetrated. We can only hope they are successful in the future in sharing the essentials between themselves, both within each organisation as well as others.
Read more
Helpful
Report abuse

gumster
5.0 out of 5 stars A mother's story
Reviewed in Australia on 23 November 2016
Verified Purchase
I admire this lady so much ,as the product of a violent home I can sympathise for what she went through. Although her circumstances were much more sinister in that her child was the target. Should be compulsory reading for high schools and educate our young people that violence of any sort is not acceptable EVER.
Read more
Helpful
Report abuse

Amazon Customer
5.0 out of 5 stars Every woman's nightmare
Reviewed in Australia on 17 June 2017
Verified Purchase
It can happen to anyone, the insidious slimy rise of domestic violence, manipulation, humiliation, blame, overt and covert threats, outbursts... Rosie does an amazing job at telling her story with complete honesty and clarity. A book for everyone to read and reflect on. It does make a difference and the momentum has to continue if we want to save women's and children's lives that deserve so much better,
Read more
Helpful
Report abuse
See all reviews

Christine A
5.0 out of 5 stars Hard to put this book down
Reviewed in the United Kingdom on 10 June 2016
Verified Purchase
Compelling, thought-provoking, poignant and exceptionally well written
Read more
Report abuse

Sue Pratt
5.0 out of 5 stars Five Stars
Reviewed in the United Kingdom on 26 January 2016
Verified Purchase
Must read book, could not put it down.
Read more
Report abuse

S. Daniel
4.0 out of 5 stars Very sad but enlightening...helped me understand a lot more about domestic violence and why more support is needed..
Reviewed in India on 19 September 2018
Verified Purchase
A very sad but enlightening read about abuse. Quite shocking that this happened in Australia...
Read more
Report abuse

AC Too
4.0 out of 5 stars Frustrating and tragic
Reviewed in the United States on 30 October 2018
Verified Purchase
As the mom of a daughter who is 6-months-out of a violent marriage, has two small daughters, and whose abusive husband is blaming her for his abuse of her - who manipulated her for fifteen years, exploding at her, hurting her, then saying she made him do it - I have a different response to this book then I would have had I read it a year ago. Our daughter has two master's degrees, is a valued director in a large corporation, and didn't get out until her life was threatened. She is in danger still, afraid he will kidnap their girls, or kill her. He's taken all the money and assets, and the courts aren't helpful. So, did we know? We knew he was rude, demeaning, angry, and explosive, but never would we have thought that she would let anyone physically assault her. Now we know much more - his porn, alcohol, and gambling addictions to name three - and as she continues therapy she's getting better. Why do they pick these guys, and keep letting them have entrance to their lives? Who knows? Something's amiss from the beginning, and once they are isolated by their abuser they have no one to tell.

The nightmare never ends for these victims - the abusers are in their lives, and their children's lives, for many many years. The manipulation, the attempt to control, the aberrant behavior, continue. I used to think, "Just get out. Why do you keep letting it happen?" Now I get it, to some extent.

So Rosie, keep talking. Courts, attorneys, and especially potential victims, need to understand why this happens, and why it continues. Courts could help a lot more than they do. Kudos for your courage!
Read more
3 people found this helpful
Report abuse

avid reader10
5.0 out of 5 stars Heartbreaking
Reviewed in the United States on 28 December 2018
Verified Purchase
This is a true story book. It is heartbreaking this woman had to go through what she did. It shows a real side of what domestic violence survivors go through. How the court system fails families. It happens to too many people.
Read more
4 people found this helpful
Report abuse
See all reviews
Back to top
Get to Know Us
Make Money with Us
Let Us Help You
And don't forget:
© 1996-2021, Amazon.com, Inc. or its affiliates