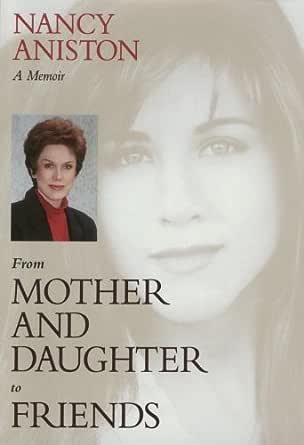 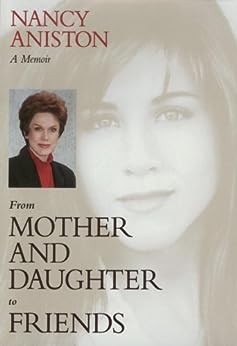 From Mother and Daughter to Friends: A Memoir Kindle Edition

Nancy Aniston is a photographer and writer living in southern California. --This text refers to the hardcover edition.

3.6 out of 5 stars
3.6 out of 5
45 global ratings
How are ratings calculated?
To calculate the overall star rating and percentage breakdown by star, we don’t use a simple average. Instead, our system considers things like how recent a review is and if the reviewer bought the item on Amazon. It also analyses reviews to verify trustworthiness.

Dianne Trudgeon
5.0 out of 5 stars Loved it
Reviewed in Canada on 14 June 2017
Verified Purchase
A need to read boom for all of us empty nesters and single parents. It takes strength and faith to keep moving forward after your parenting has ended. A harder job being a empty nester then a parent.
Read more
Report abuse

Butters
3.0 out of 5 stars Painful and very sad life story
Reviewed in the United States on 4 April 2018
Verified Purchase
It is clear Nancy has had a very painful and traumatic life. Her mother left the family when she was very young, her father was very strict, controlling, and had a bad temper. Her younger sister unexpectedly died when she was just a few years old. On top of that she grew up very poor and tried most of her life to gain financial security but failed over and over again. I feel bad for the author, as she seems to have had a lot of painful experiences, and has had a lot of abandonment in her life beginning from a very young age, yet it is clear throughout the whole book that the author fails to have insight into her relationships with others, and continues the same unhealthy behaviors with family members for decades. The author appears to be truly naive in her search for the "traditional' family, as she doesn't have the role models, skill set, or where-with-all to have the "traditional" family she has always wanted. She seems to want things for the wrong reasons. There is an element of unrealistic expectations and ineptness in most things she sets out to accomplish, and inevitably most of her relationships and career aspirations fail. It is at times painful to read because I just want to shake her back into reality and tell her "that's not how it works!" The author questions her thinking a lot and seems to have some awareness that she doesn't have answers/solutions to her various problems, and thankfully she does seek outside help from various sources. Other than those moments of seeking help, the author seems to wallow in her various problems and it is hard to read over and over again that she was shocked and devastated over this slight and that slight, etc etc. The author obviously puts herself on the line for her husbands and kids and is very dedicated to family. But she is so focused on controlling family members and believes she knows what is best for everyone. Her family members understandably want to limit contact. It is a bit of a cautionary and sad tale about a woman from a generation where husbands and children always come first, at the detriment of the woman's own well-being and sanity. One thing I noticed that especially bothered me, and that doesn't get resolved, is that she writes about her husband and kids having a problem with her temper and rage. Yet she doesn't seem to really understand how painful it is to be on the recieving end of that. She says something to the effect that "she is working on it" and doesn't seem to take their concerns seriously. She writes about her marriage problems in great detail. It seems she and her husband were not well matched at all and seemed to have very different goals. She seemed to want to be with someone much more ambitious, which is uunderstandable. No matter what she tried she ended up without much money and went without for most of her life.
Read more
45 people found this helpful
Report abuse

Sunny
5.0 out of 5 stars The Terrible Sorrow of Parent/ Adult Child Estrangement
Reviewed in the United States on 5 June 2019
Verified Purchase
Nancy Aniston wrote her memoir in a very engaging style. One wants to keep reading and wishes that she had done a sequel after she and her daughter, Jennifer Aniston, apparently reconciled. Thousands of parents and their adult children are estranged now, for trivial, petty reasons, as what appear to have been the case for Nancy; it is a growing trend in the United States. But when Nancy endured this incredibly painful nine-year saga, she did not have the benefit of Sheri McGregor, M.A.'s, book, Done With The Crying--Copyright 2016, or the chat room at RejectedParents.NET to commiserate with other parents whose adult children have rejected them after a lifetime of love and care. Nancy writes a transparent memoir, exposing her soul with all of her flaws, and a mighty river of love that she gave to her children, which in the end, only meant that they could take her for granted for far too long. She was a brave and very talented, managerial woman who was selfless in so many ways, and helped so many while she lived. I passed this book on to my beloved sister, and she loves it too. I especially adore the quote by Theodore Roosevelt with which Nancy chose to close the book--it is so apropos here; but I won't ruin Nancy's ending by divulging that quotation to you now. Read the book. It is a must-read and surprisingly good for a first-time author. On the down side, whoever did Nancy's developmental editing missed the bar of excellence by a wide margin as the last quarter of the book is a little disjointed and could have benefited greatly by a few timely explanations. Nancy's greatest flaw was probably the expression of her rage at times, and she was honest about that. But contrary to articles that I have seen stating that she was highly critical of Jennifer, I never had that impression. She did have her moments of rage, but I think that it would be a far overreach to characterize this loving mother in that manner. She sought to overcome her frailties and faults through spirituality and higher wisdom, something we could all take a lesson from. I highly recommend this book. One can only hope that the spirit of Nancy Aniston is looking down on this review and comprehending that her spirit and her voice live on and that new generations of readers appreciate her.
Read more
14 people found this helpful
Report abuse

Amazon Customer
4.0 out of 5 stars Interesting
Reviewed in the United States on 26 July 2017
Verified Purchase
I felt bad for the lady, but I understand the need to break away from a controlling mother. Complete detachment is the only way to live independently in some cases. It is evident that the mother was self-centered and lacked the ability to see others' perspectives. She was an excellent writer, and her intelligence is evident. She raised a wonderfully talented daughter, so she could not have been all bad. It's amazing that Aniston could be so forgiving of her father who left the family for another woman, but she could not forgive her mother for giving an interview to a tabloid tv show. I guess she had her reasons. No judgement here.
Read more
26 people found this helpful
Report abuse

Amazon Customer
4.0 out of 5 stars INTERESTING READ
Reviewed in the United States on 7 May 2017
Verified Purchase
It was interesting to learn about Jennifer Aniston's background. It was quite upsetting, though, to learn the reason for the very serious rift between her and her mother. All about one interview? You kind of wonder how that could be.
Read more
12 people found this helpful
Report abuse
See all reviews
Get FREE delivery with Amazon Prime
Prime members enjoy FREE Delivery and exclusive access to movies, TV shows, music, Kindle e-books, Twitch Prime, and more.
> Get Started
Back to top
Get to Know Us
Make Money with Us
Let Us Help You
And don't forget:
© 1996-2020, Amazon.com, Inc. or its affiliates