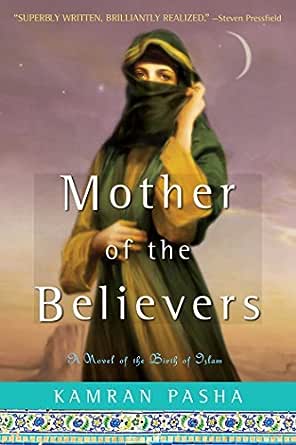 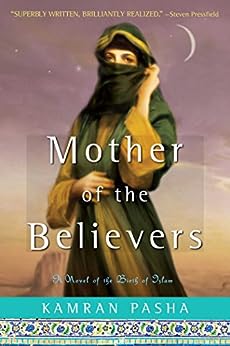 Mother of the Believers: A Novel of the Birth of Islam Kindle Edition

"With insight and sensitivity, and in a beautiful balance of research and imagination, Kamran Pasha sheds light not only on the seminal figure of Aisha but on the origins of Islam. Mother of the Believers is both timely and timeless." -- Karen Essex, author of Leonardo's Swans

"With incredible scholarship and sensitivity, Kamran Pasha has crafted a remarkable tale and one that is long overdue. From the early days of persecution and enmity to the triumph of what will be one of the world's great religions, Aisha describes the struggle of a small band of believers to survive and ultimately to flourish in an environment that is by turns unforgiving and breathtakingly beautiful. This is a book of inspired and heartfelt imagination to be savored and enjoyed and an achievement of the first order." -- Frederick J. Chiaventone, author of Moon of Bitter Cold

"Both epic and intimate, a glorious story." -- Amy Tan --This text refers to an out of print or unavailable edition of this title.

The Mother of the Believers is a gripping book and remarkable in that it is a novelisation of the life of the favourite wife of the Prophet Muhammad, by a Muslim author. As such some might see it as controversial, especially as it faithfully presents the main characters as very human, fallible, passionate and complex people.
In the 'Author's Note' which I strongly recommend to readers, Kamran Pasha explains his intention in writing this novel. In the body of the text the author demonstrates great sensitivity, a total lack of religious arrogance and an amazing ability to avoid offending those of conflicting views, within Islam or of other faiths with his courteous and respectful attitude.
The setting is one of the most significant pivotal periods of human history and that is made absolutely clear, despite the reader being engaged through the life of Aisha and her personal relationships with her husband and the main characters surrounding them.
I think the book is an extraordinary achievement. I devoured it at speed and was sorry to have finished it having become so deeply involved with the story and the characters.
I have already got 'The Shadow of the Swords' by the same author and look forward to reading it with enthusiasm.
Sue Almond
Read more
Report abuse

Ms. Harriet Yeo
2.0 out of 5 stars Disturbing and wordy.
Reviewed in the United Kingdom on 5 July 2011
Verified Purchase
Having read other books about Aisha I was keen to read this, boy was I disappointed, the biggest problem I think is that the book was written by a man. The initial part where Mohammed takes a nine year old wife was deeply disturbing in the way he described the feelings that she would have had and it wouldn't have taken much more to have made it a paedophiles text, describing how men would feel looking at a pre pubescent child to me was going too far. The text was way too wordy and some radical editing would have made it a much more readable length - once Aisha had reached her later teens the semi paedophile content seemed to abate.

The author seems to have wanted to introduce Islam to a wider audience, the more I read the further and further away from Islam the text pushed you and the more and more I recognised Mohammed for what I think he was, a fabulous politician, military tactician, social reformer but not a prophet. A good man who brought stability and social reform to warring Arabia and for that alone deserving of respect (ignoring the nine year old bride).

As a non Muslim it did leave me feeling depressed that I would never see the majesty of the Ka'aba in all its glory.

Prof. Waldheim
5.0 out of 5 stars You dont wanna put it away
Reviewed in Germany on 23 December 2013
Verified Purchase
Its really captivating and additionally you learn a lot. Very good book. Definitely recommendable for Muslims and non-Muslims who are interested in Islam.....!
Read more
Report abuse

Aimee
2.0 out of 5 stars Disappointing
Reviewed in the United States on 21 March 2020
Verified Purchase
We were excited to read this book and find a realistic portrayal of the beginnings of Islam, as opposed to Christian apologist materials we’d been previously exposed to. We made it halfway before giving up in a combination of discouragement, distaste and boredom. Reasons:
- the author goes out of his way to justify the marriage of 9 year old Aisha, citing cultural norms of the time. Maybe. But do we want to hear about the child’s sexual stirrings on their wedding night? We did not.
- there are just far too many descriptions of women’s breasts and thighs, the leering stares (only by unbelievers) and “hardening members.” We’re no prudes but it’s unnecessary, adds little to the story, and it’s always the unbelievers who are sexually inappropriate.
- sexuality is used to portray people as good or bad; a female antagonist is portrayed as promiscuous, bisexual and manipulative, and a male antagonist is described as having a high, almost effeminate voice.
- Muslims are portrayed as blameless, sometimes martyred. Many likely were blameless; it’s also likely that as with Christianity’s history, there has been aggression on both sides.
- the child Aisha is present and speaks up in many situations where a child, particularly female, simply wouldn’t have been allowed.
We’d still like to read a book that portrays a balanced story of the beginnings of Islam, without the above elements (particularly without apologist explanations for child marriage).
Read more
2 people found this helpful
Report abuse

Mohamed El GAZAYERLI, MD.
5.0 out of 5 stars Very well written and RESEARCHED BUT Aisha was 29 when the Prophet died, 12 years after migrating to Medina. Their marriage was consummated in Medina so she was 17 at that time. She was betrothed at 7. This is a great book for moslems and non-Muslims.
Reviewed in the United States on 27 May 2018
Verified Purchase
Aisha was 29 when Prophet died. Marriage consumated in Medina 12 years earlier at 17. Excellent for moslems and nonmoslems.
Read more
4 people found this helpful
Report abuse
See all reviews
Get FREE delivery with Amazon Prime
Prime members enjoy FREE Delivery and exclusive access to movies, TV shows, music, Kindle e-books, Twitch Prime, and more.
> Get Started
Back to top
Get to Know Us
Make Money with Us
Let Us Help You
And don't forget:
© 1996-2020, Amazon.com, Inc. or its affiliates