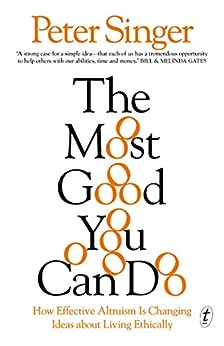 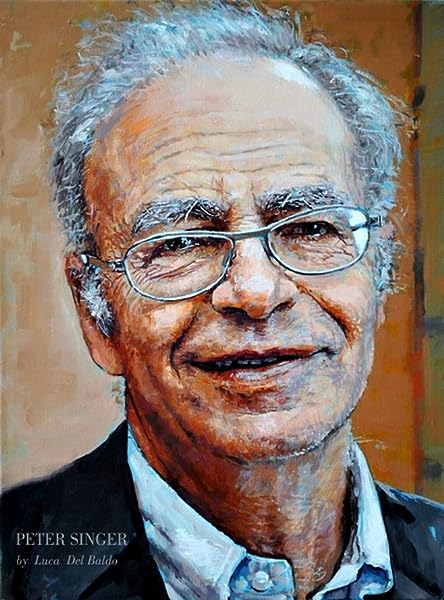 The Most Good You Can Do: How Effective Altruism Is Changing Ideas about Living Ethically Kindle Edition

by Peter Singer (Author) Format: Kindle Edition
See all formats and editions
Sorry, there was a problem loading this page. Try again.

Peter Singer, often described as the world’s most influential living philosopher, presents a challenging new movement in the search for an ethical life, one that has emerged from his own work on some of the world’s most pressing problems.

Effective altruism involves doing the most good possible. It requires a rigorously unsentimental view of charitable giving, urging that a substantial proportion of our money or time, should be donated to the organisations that will do the most good with those resources, rather than to those that tug the heartstrings.

Singer introduces us to an array of remarkable people who are restructuring their lives in accordance with these ideas, and shows how, paradoxically, effective altruism often leads to greater personal fulfilment.

Peter Singer is Ira W. DeCamp Professor of Bioethics, Princeton University, and Laureate Professor, School of Historical and Philosophical Studies, University of Melbourne. He is the author of more than twenty books, including The Life You Can Save. His most recent book is The Most Good You Can Do. Singer was born in Australia. He divides his time between New York City and Melbourne.

‘Peter Singer’s status as a man of principles and towering intellect—a philosopher extraordinaire, if you will—is unrivalled in Australia.’ Sydney Morning Herald

‘Peter Singer may be the most controversial philosopher alive; he is certainly among the most influential.’ New Yorker

‘Forty years on from Animal Liberation, Peter Singer is still challenging our complacency with his advocacy for new ideas and movements…In clear prose, Singer weaves effective altruism into a timely and convincing ideology.’ Books & Publishing

‘Singer makes a strong case for a simple idea—that each of us has a tremendous opportunity to help others with our abilities, time and money. The Most Good You Can Do is an optimistic and compelling look at the positive impact that giving can have on the world.’ Bill and Melinda Gates

‘The Most Good You Can Do is an important book. Reading it may change your life and save someone else’s.’ Australian Book Review

"Singer is a deep thinker and a wonderfully clear writer, moving smoothly from careful philosophical analyses to vivid stories of extraordinary lives."

-- "Paul Bloom, author of Against Empathy" --This text refers to an alternate kindle_edition edition.

"" --This text refers to an alternate kindle_edition edition.

Peter Singer is the Ira W. DeCamp Professor of Bioethics in the University Center for Human Values at Princeton University and Laureate Professor at the University of Melbourne. He first became well known internationally in 1975 with the publication of Animal Liberation.

4.3 out of 5 stars
4.3 out of 5
213 global ratings
How are ratings calculated?
To calculate the overall star rating and percentage breakdown by star, we don’t use a simple average. Instead, our system considers things like how recent a review is and if the reviewer bought the item on Amazon. It also analyses reviews to verify trustworthiness.

Soph
5.0 out of 5 stars A good read. Inspiring read.
Reviewed in Australia on 2 June 2019
Verified Purchase
Many interesting ideas compacted into very few pages. At first, I was interested in the Alumni, then realising his success, reading this made me think more about what I have done thus far. The book truly inspires me to continue my journey to being a more effective altruist.
The book came in good condition, packaging was good and safe. Prime gave very fast delivery.
Read more
Helpful
Report abuse

Jon
5.0 out of 5 stars A text to share
Reviewed in Australia on 26 December 2016
Verified Purchase
Hugely influential on my giving practices and those of my family and friends. Singer's accessible writing has again prompted action amongst people who commonly (smugly?) invoked inaction as the only sensible course of action.
Read more
Helpful
Report abuse

Kade Hamalainen
5.0 out of 5 stars Influential and rational
Reviewed in Australia on 14 May 2015
Verified Purchase
This book will influence a large portion of my future cash flows.
Read more
Helpful
Report abuse

M. Y. Mim
2.0 out of 5 stars Don’t buy!
Reviewed in the United Kingdom on 24 November 2021
Verified Purchase
While useful for philosophy study, worthless for anyone who really wants to do the most good for the world. Arguments flawed, limited, and pushes organisations in which the author has investments.
Read more
One person found this helpful
Report abuse

James
5.0 out of 5 stars just like it has mine
Reviewed in the United Kingdom on 6 August 2015
Verified Purchase
One of the few books I have ever read in a single day. Both exciting and pleasurable to read - Peter Singer is inspiring. If you're not familiar with the ideas of effective altruism, you must read this book. It might change your whole life, just like it has mine.
Read more
13 people found this helpful
Report abuse

Maddie
3.0 out of 5 stars Philosophy student
Reviewed in the United Kingdom on 22 May 2017
Verified Purchase
Very useful for my course, but unfortunately the principles of effective altruism are not something I can get behind.
Read more
3 people found this helpful
Report abuse

Brian Wilson
5.0 out of 5 stars Amazing book
Reviewed in the United Kingdom on 25 August 2019
Verified Purchase
It makes you think and it makes you act.
Read more
2 people found this helpful
Report abuse

Leela Attfield
5.0 out of 5 stars Worth putting something back
Reviewed in the United Kingdom on 25 October 2016
Verified Purchase
This book should be read by as many people as possible - easy to follow, and thought-provoking.
Read more
3 people found this helpful
Report abuse
See all reviews
Report an issue
Does this item contain inappropriate content?
Report
Do you believe that this item violates a copyright?
Report
Does this item contain quality or formatting issues?
Report