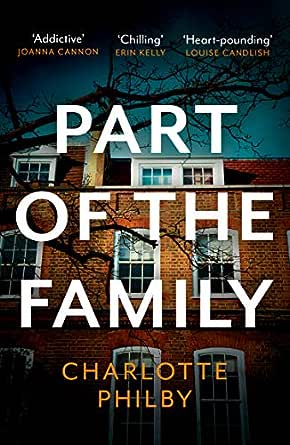 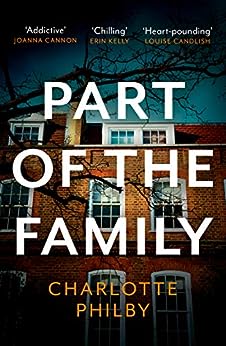 Part of the Family: The Most Compulsive Book You’ll Read All Year Kindle Edition

‘[An] intriguing exploration of deceit and duplicity’ Guardian

‘I devoured this beautifully written, intricately wrought and unique blend of spy thriller and domestic suspense … The twists keep coming, right down to that chilling last line’ Erin Kelly

‘An enigmatic and slippery beast, a cool new generation of spy novel. Just as the characters play cat and mouse with one another, so does the author with her readers – it’s a guessing game right to the end and I turned the last page with my heart pounding. Recommended’ Louise Candlish

‘Dark and addictive and magnificent’ Joanna Cannon, author of The Trouble with Goats and Sheep and Three Things About Elsie

‘A writer of promise’ Financial Times

‘Like The Night Manager rewritten by Patricia Highsmith, this is a distinctively female take on spying’ Mail on Sunday EVENT Magazine

‘Spying has been her inheritance and this brilliant, beautifully crafted debut novel uses it to the full – and so much more besides’ Jon Snow, Channel 4 News

‘Philby clearly understands something about deceit and betrayal, making this a page-turner with several cliffhanger moments, including the ending’ Daily Express

Charlotte Philby worked for the Independent for eight years, as a columnist, editor and reporter, and was shortlisted for the Cudlipp Prize at the 2013 Press Awards for her investigative journalism. Founder of the online platform Motherland.net, she regularly contributes to the Guardian and iNews, as well as the BBC World Service, Channel 4 and Woman's Hour. She has three children and lives in London. Charlotte is the granddaughter of Kim Philby, Britain’s most famous communist double-agent.

The Most Compulsive Book You’ll Read All Year

3.7 out of 5 stars
3.7 out of 5
180 global ratings
How are ratings calculated?
To calculate the overall star rating and percentage breakdown by star, we don’t use a simple average. Instead, our system considers things like how recent a review is and if the reviewer bought the item on Amazon. It also analyses reviews to verify trustworthiness.

Elle T
3.0 out of 5 stars A good thriller!
Reviewed in Australia on 31 December 2020
Part of the Family started of a little slow for me and was initially a bit confusing as to what was going on. But once I figured it out, it was fast paced and unputdownable. A thriller with plenty of deceit and duplicity, this book wasn't at all what I expected, but in a good way. I was however, left nonplussed by the ending, but perhaps it needed to be that way.
Read more
Helpful
Report abuse
See all reviews

BookEm
1.0 out of 5 stars Don't bother
Reviewed in the United Kingdom on 2 October 2019
Verified Purchase
I am genuinely astonished at the glowing reviews this book has received. We read it as someone recommended it for our book club (without having read it first) and I was full of anticipation, given the author's family connections. However, the plot is wholly incredible, the writing sloppy, and the characters unbelievable - particularly the protagonist. I had no idea at the end why she did any of the things she did - and, frankly, I didn't care. Really, don't waste your time!
Read more
22 people found this helpful
Report abuse

R.Saunders
1.0 out of 5 stars this was so overrated
Reviewed in the United Kingdom on 19 July 2019
Verified Purchase
I was taken in by the hype I'm afraid and the Philby name. I read up to 15% of the kindle edition and could go no further.. it wasn't even a good Mills and Boon ( very lightweight romances) and So boring. I just couldn't go on reading further. Amazon has very kindly refunded me my money. The only time I have ever asked for a refund for a poorly written over hyped novel. I asked for a refund because I genuinely felt duped
Read more
13 people found this helpful
Report abuse

S. Holland
1.0 out of 5 stars A difficult read
Reviewed in the United Kingdom on 5 August 2019
Verified Purchase
Unfortunately I just couldn't get into this book, it was labouring and difficult to read. It flittered from present to past and left me cold and confused. The long drawn out sentences were boring and pretentious. It's a no from me.
Read more
13 people found this helpful
Report abuse

E. Chittenden
5.0 out of 5 stars The most brilliant read
Reviewed in the United Kingdom on 24 June 2019
Verified Purchase
Where to start. Possibly with the level of little details that I've never seen before in an author. The story is told entirely from the perspective of two women, both of which you can't entirely tell is on the side of good. In fact you never really know for most of the book as the story unfolds with little bits of detail that keep you guessing all the way through.

If you enjoyed Big Little Lies, or the Night Manager then you're going to love this as it takes the dark twisty story you'd seen in something like BLL and mixes it with the espionage of John Le Carré, in that respect, I'm going to say, the King is Dead, long live the Queen, as Philby is rightfully going to knock his crown off his head and take the mantel as Britain's best spy novelist.

RG
1.0 out of 5 stars Very poor
Reviewed in the United Kingdom on 11 July 2019
Verified Purchase
Dreadful. Completely unbelievable and daft plot. Ghastly characters all lifted straight from central casting. Poorly written. A ludicrous book on every level.
Read more
12 people found this helpful
Report abuse
See all reviews
Get FREE delivery with Amazon Prime
Prime members enjoy FREE Delivery and exclusive access to movies, TV shows, music, Kindle e-books, Twitch Prime, and more.
> Get Started
Back to top
Get to Know Us
Make Money with Us
Let Us Help You
And don't forget:
© 1996-2020, Amazon.com, Inc. or its affiliates