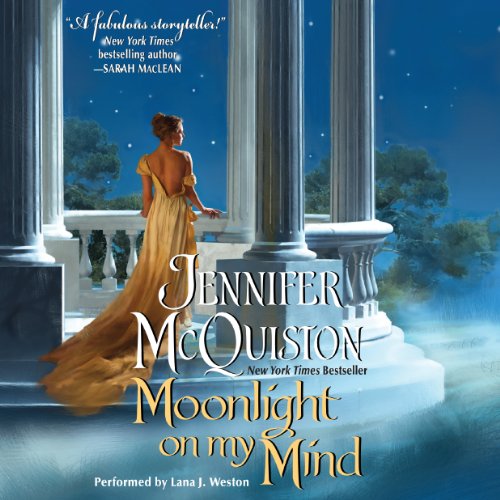 Moonlight on My Mind

Sandra R
TOP 500 REVIEWER
5.0 out of 5 stars Five Stars
Reviewed in Australia on 7 May 2015
Another really enjoyable book from Ms McQuiston. Can be read as a standalone. Her writing is fabulous !
Read more
Helpful
Report abuse
See all reviews

J. Faltys
5.0 out of 5 stars Another Immensely Satisfying Installment in the Second Sons Series
Reviewed in the United States on 2 April 2014
Verified Purchase
A year ago a kiss changed the lives of Julianne and Patrick forever. For Patrick, he was accused of killing his brother with Julianne the witness and has been hiding out in Scotland ever since. For Julianne, her plan to make Patrick's brother jealous by dancing with Patrick has left her hungry for the intense emotions his kiss inspired in her. No man's ever equaled him though and his absence has left her contemplating what she truly saw on that fateful night. To see why he affects her the way he does and to assuage her guilt she travels to Scotland to bring him home to claim his birthright, but once again a kiss leads to life-altering events. Together they must forge a path to HEA through trust and the discovering of truth before the real killer strikes again.

Julianne is a very complex and surprisingly modern heroine in her thoughts and deeds. She was brought up with all the expected training of finding a rich and titled husband, managing a household, and having a family. How she goes about finding that husband is a bit mercenary though. She used Patrick to get his brother's attention but became enthralled by Patrick and his kiss and tried to recreate the searing electricity their kiss engendered by going from one titled gentleman's kiss to another's with no luck. She often looks before she leaps and isn't afraid to go after what she wants. She might seem superficial at times but deep down she's a woman of great loyalty and compassion which is what binds her to Patrick and makes for their formidable connection. Julianne wasn't always easy to like early on but I admired her strength and forthright nature and was happy she found someone who could truly see her for who she is.

Patrick is an unexpected man of his time too in that he's a veterinarian and cares nothing for titles. He's happiest spending time with animals rather than people but finds himself drawn to Julianne against his will. He hates her for testifying against him but will do whatever necessary to keep her safe when her life's in jeopardy too. He has a hard time trusting her at first as he knows she's played him in the past but the flashes of compassion he sees in her and her devotion to make things right for him and his family slowly win him over. Patrick's a good man who Julianne's lucky to have because of his loyalty and need to do what's right, he's unfailingly kindhearted which sometimes works against him but he's ultimately the quintessential hero. Add in the subtle sexiness he exudes and you have a drool-worthy hero too!

The witty and engaging banter between Patrick and Julianne enhances an already entertaining story. They're both equals in intelligence and strong-willed natures and it shows in their scintillating dialogue that adds to the sexual tension between them that is already off-the-charts. The mystery that brought them together is extremely well-written with numerous twists and turns that kept me guessing until the end with just enough clues to make it all come together perfectly. Along with the likable main characters come an equally entertaining cast of secondary characters, namely Patrick's friends who support him every step of the way. From colorful ballrooms to the rustic countryside Ms. McQuiston has vividly depicted the varying degrees of social class and dropped these two rather different people right into the middle of it where they unerringly find a connection and an immensely satisfying HEA. Ms. McQuiston continues to entertain with her compelling storytelling and I highly recommend her books to all fans of the historical genre.
Read more
6 people found this helpful
Report abuse

Andrea T
5.0 out of 5 stars Exciting, Dangerous Adventure, Fantastic Love Story
Reviewed in the United States on 13 April 2015
Verified Purchase
I adored What Happens in Scotland (Second Sons 1) and liked Summer is for Lovers and Her Highland Fling (Second Sons 2 and 2.5). I absolutely loved Moonlight on My Mind. LOVED IT.

Moonlight on My Mind is the whole package. Patrick and Julianne are brought together by death and betrayal, false accusations, and a marriage-of-convenience. Theirs is a relationship of extreme necessity, begrudging admiration and respect, held together by love. I loved experiencing each moment the two had together, their surprising realizations about each other's true nature, and how their bond was forged by support and loyalty. Julianne and Patrick formed a true partnership, heightened by desire. Perfect.

Moonlight on My Mind also delivers a great murder mystery, one that wasn't clear or answered until the end. I loved that I never once guessed or even suspected the culprit of the murders of Patrick's father and brother. That rarely happens and is always welcome.

It's my thinking that Moonlight is the last of the Second Sons series, though the minor character of Dr. Merial is the hero of McQuiston's Diary of an Accidental Wallflower. I started the series because I really loved the premise of book one and it was great. Moonlight on My Mind is the ultimate treasure of the Second Son series. Highly recommend.
Read more
Report abuse

Judge Tabor
3.0 out of 5 stars Too Much "Guilt" Hindered The Lovely Chemistry Between The H/h
Reviewed in the United States on 27 April 2014
Verified Purchase
We were first introduced to Julianne Baxter in a "Summer is for Lovers" but, her character wasn't nearly as captivating in that novel as it was portrayed in "Moonlight on My Mind." Our hero, Patrick Channing, was first introduced in "What Happens in Scotland" as the local town vet. I really did like both Julianne and Patrick in this book. However, and this is a pretty big "however" - some parts of this book I just didn't like at all. I'm not going to rehash the overall book's description because it has been done a few times already. I will, however, denote some issues I had with the storyline.

* Very Slight Spoilers Follow*
There was a lot of chemistry between Patrick and Julianne but I didn't feel that the storyline made enough of that chemistry. When Patrick came into the little gathering Julianne had prepared for the local community and she saw him dressed in formal clothes for the first time, he made a bee-line to her and the chemistry was enough to raise the hair on the reader's arms. However, they didn't even have a "much looked forward to" intimate evening together later that night. The storyline simply fast forwards to the next morning.

When Patrick was arrested and beat up by his varlet cousin, Blythe, and Julianne visited him in his cell, he was hurt, dirty, stinky and his ribs were broken. Where was the Julianne who should have been absolutely outraged? Where was the skillful planner who normally could and would find a way to get the job done in everything else? She barely acknowledged his bruises and wounds. This was a 180 degree turnaround from the Julianne up to that point. This just seemed unrealistic and totally out of character. Plus the story's implications were that Patrick had been pounded by his cousin on a regular basis during the week he was imprisoned. Julianne simply returns home and apparently further attempts to visit Patrick are rejected by the local magistrate and she humbly submits to his will? Totally out of character for Julianne who had a major problem "obeying" pretty much anybody up to that point - it seems as though she would have found a way to do something. This was after all, the Julianne who went all the way to Scotland by herself to haul Patrick back home.

At times, Patrick and Julianne had some great chemistry, but I would have enjoyed more of a relational build-up as opposed to what this story gave us. What we had were two characters who had too much guilt to feel real comfortable with one another. Julianne had guilt because she felt responsible for putting Patrick in the position he was in and Patrick felt guilty for not telling Julianne the primary reason he married her. I understand these types of issues are important for the story but somehow, I felt that the guilt went on way too long.
Read more
9 people found this helpful
Report abuse

Cindy K
4.0 out of 5 stars #3 in the series
Reviewed in the United States on 4 March 2016
Verified Purchase
Victorian romance with sex. #3 in the series. This is Patrick & Julianne's story.

Well, I didn't have high hopes for this one. I have been disappointed in the first 2 books in this series. Julianne is not a likable heroine. Vain, pretentious, shallow. She also has a touch of OCD.
Wrongly accusing Patrick of killing his brother (her poor eyesight misleading her), she sets out for Scotland to find him. Then, this story turns into a murder mystery. Julianne shows she has intelligence, loyalty & fortitude. Together, her & Patrick work to find out who killed his brother & more recently, his father.

It turned out to be a good story. I really liked it.
Read more
Report abuse

By Benj
5.0 out of 5 stars enjoyed it!
Reviewed in the United States on 15 June 2021
Verified Purchase
I liked it and kept finding excuses to get back to reading it. There was the romance, the mystery and the sexual scenes felt natural and not just stuck in to sell the book.
Read more
Report abuse
See all reviews
Back to top
Get to Know Us
Make Money with Us
Let Us Help You
And don't forget:
© 1996-2021, Amazon.com, Inc. or its affiliates