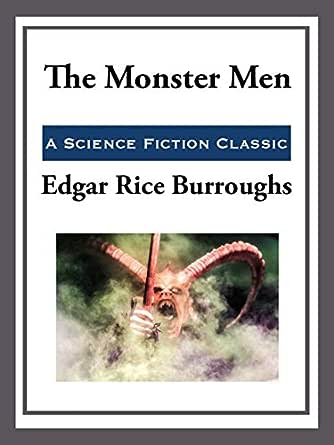 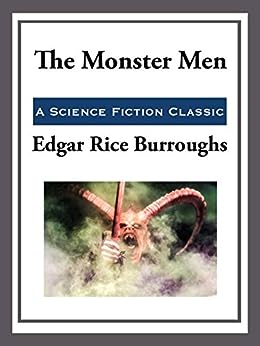 Edgar Rice Burroughs (1875 - 1950) was a prolific American author of the 'pulp' era. The son of a Civil War veteran, he saw brief military service with the 7TH U.S. Cavalry before he was diagnosed with a heart problem and discharged. After working for five years in his father's business, Burroughs left for a string of disparate and short-lived jobs, and was working as a pencil sharpener wholesaler when he decided to try his hand at writing. He found almost instant success when his story 'Under the Moons of Mars' was serialised in All-Story Magazine in 1912, earning him the then-princely sum of $400.

Burroughs went on to have tremendous success as a writer, his wide-ranging imagination taking in other planets (John Carter of Mars and Carson of Venus), a hollow earth (Pellucidar), a lost world, westerns, historicals and adventure stories. Although he wrote in many genres, Burroughs is best known for his creation of the archetypal jungle hero, Tarzan. Edgar Rice Burroughs died in 1950.

4.2 out of 5 stars
4.2 out of 5
73 global ratings
How are ratings calculated?
To calculate the overall star rating and percentage breakdown by star, we don’t use a simple average. Instead, our system considers things like how recent a review is and if the reviewer bought the item on Amazon. It also analyses reviews to verify trustworthiness.

denand
4.0 out of 5 stars Interesting
Reviewed in the United Kingdom on 2 March 2017
Verified Purchase
A mystery that only ERB could write. Early writing that gives an interesting twist to the tale. Enjoyed the book
Read more
Report abuse

Barbara Chapman
3.0 out of 5 stars typical
Reviewed in Canada on 17 June 2014
Verified Purchase
The usual for Burroughs. I happen to like this type of book for light summer reading. Perhaps you might also.
Read more
Report abuse

Charles van Buren
5.0 out of 5 stars A more exciting and adventurous ISLAND OF DR. MOREAU
Reviewed in the United States on 22 November 2020
Verified Purchase
In his 2010 Amazon review, reader Stephen Fletcher calls this book Tarzan meets Frankenstein. A pretty good description but in this one, the "creation" is much more successful.

So, we have weird science and jungle adventure on a remote island. Sound familiar? It did to me when I first read it in high school. Familiar because I had first read H.G. Wells' THE ISLAND OF DR. MOREAU. I was shocked and had to check dates to see which author took the idea from the other. To my youthful disappointment, I discovered that my much admired Edgar Rice Burroughs was second with the idea. I dug deeper and found someone, I don't remember who, with an explanation. He wrote words to the effect that the writing demon was on Burroughs for about ten years, then he spent the rest of his career plagiarizing himself and others. As I read more Burroughs, I found this to be only somewhat true.
For instance Burroughs probably got the idea for THE MONSTER MEN from Wells but it isn't plagiarism. The plot takes a different and more adventurous path. It entertained my young self much more than did Wells. Upon rereading it, I discovered that it still does.

If you want a more exciting, fun read based upon an idea
similar to that behind THE ISLAND OF DR. MOREAU, you may want to try THE MONSTER MEN by Edgar Rice Burroughs. True, Galaxy magazine columnist Floyd C. Gale called it some of Burroughs' worst writing. But he added that there is a lot of excitement in it. I don't agree about the writing quality but it is an exciting adventure which refuses to roll over and die whether one likes Burroughs' prose or not.

Let me add the usual caveat for literature from the 1800's and early 1900's. Don't expect modern political correctness. In fact Burroughs held many opinions, most quite common at the time, which are no longer in vogue. But he wrote a rollicking good story.

J Smith
4.0 out of 5 stars Good Introduction to Burroughs Work
Reviewed in the United States on 12 June 2015
Verified Purchase
In many ways, Burroughs was a great author. He wrote many engaging adventure and science fantasy novels, and he had a strong influence on adventure fiction, fantasy, and science fiction in all of there forms. There is a reason why Ray Bradbury cites Burroughs' strong influence on his own works. The Monster Men is one of his better works, and I strongly recommend it to anyone who just wants to get a quick sense of Burroughs' style.

That said: You will not enjoy Burroughs if you can't give him some leeway for being a racist and sexist twat, just like 95% of his contemporaries. In these two areas, he is a man who certainly does not transcend his time period. Be prepared to encounter semi-Darwinian ideas about race and evolution in this and other works that are uncomfortably close to the ideas put forth and acted upon by the Nazis in the 1930s and 1940s. His ideas about women and their relation to men are about what you would expect: the men adventure; the women get rescued. (It must be said, however, that Burroughs seemed to at least get the idea of consent, unlike Robert Howard.)
Read more
2 people found this helpful
Report abuse

doctorspock
5.0 out of 5 stars The monster men by Edgar Rice Burroughs
Reviewed in the United States on 19 December 2014
Verified Purchase
Absolutely weird and should have been made into a movie why not... it has strange problematic areas, souless creature concept the whole thing reminds me of mixed comic book issues of the HUlk I never wanted to understand the man thing from marvel comics and adam Warlock when he indeed teamed up with the Hulk in a saga. This is like a frankenstein but there was some twist toward the end of the book like it was a dream. This book has a weird double meaning for many of the vocabulary and this is old fashioned like an Edgar Alan Poe book of all things. i can not deal with definites here.
Read more
Report abuse
See all reviews
Back to top
Get to Know Us
Make Money with Us
Let Us Help You
And don't forget:
© 1996-2021, Amazon.com, Inc. or its affiliates