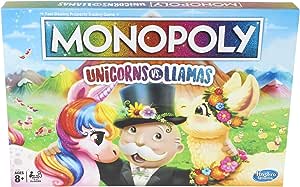 Monopoly Unicorns Vs. Llamas Board Game for Ages 8 & Up (Amazon Exclusive)

Brand: Monopoly
4.7 out of 5 stars 4,769 ratings
Secure transaction
Returns Policy
Amazon-managed Delivery
Your transaction is secure
We work hard to protect your security and privacy. Our payment security system encrypts your information during transmission. We don’t share your credit card details with third-party sellers, and we don’t sell your information to others. Learn more
Amazon-managed Delivery
Amazon manages delivery by using preferred couriers/agents. Order delivery tracking to your doorstep is available

Whether via a game board with dice, a deck of cards, simple lines drawn on scrap paper, or electronic media, gaming is a global pastime that has enriched culture for millennia. From the most classic tabletop board games to up-and-active, play-to-learn games for preschoolers to the painfully funny party games that satisfy your wild side, Hasbro gaming is a one-stop-shop for filling your games closet. While continuing to produce some of the most memorable games in the history of family gaming, Hasbro gaming stays up-and-coming by developing games that incorporate digital content and by partnering with some of the biggest names in entertainment. Hasbro gaming and all related properties and characters are trademarks of Hasbro.

Inspired by the lively rivalry between llamas and the mythical unicorn, the Monopoly Unicorns vs. Llamas game can be a fun game for animal lovers everywhere. This edition of the Monopoly board game is designed to be played in teams. Join Team Unicorn or Team Llama and move around the board to claim titles such Most Colorful, Twinkliest Eyes, Most Charming, and Sweetest. The game ends when all titles have been claimed and the team with the most titles wins. The winners can say that their adorable beast is the best!

4.7 out of 5 stars
4.7 out of 5
4,769 global ratings
How are ratings calculated?
To calculate the overall star rating and percentage breakdown by star, we don’t use a simple average. Instead, our system considers things like how recent a review is and if the reviewer bought the item on Amazon. It also analyses reviews to verify trustworthiness.

Imogen
TOP 1000 REVIEWER
5.0 out of 5 stars A little confusing at first
Reviewed in Australia on 5 April 2020
Style Name: StandardVerified Purchase
For someone who has grown up with traditional monopoly, it was difficult understanding the rules, however once played a few times, my daughter and I loved it.
Read more
Helpful
Report abuse
See all reviews

mrclearskies
1.0 out of 5 stars Confusing Game
Reviewed in the United States on 2 December 2019
Style Name: StandardVerified Purchase
Cute and colorful is the only good thing I have to say. This game is pretty confusing. We played 2 times and quit early both times. Adults and children were all very frustrated both times. We are a board game playing family. The rules need to be made CLEAR.
Read more
39 people found this helpful
Report abuse

EmpD
4.0 out of 5 stars Decent game, poor storage organization
Reviewed in the United States on 25 November 2019
Style Name: StandardVerified Purchase
This game makes for a nice change from regular Monopoly with the game being both team-based and focused on territorial control over pure wealth.
Players form even teams and go around the board claiming free tiles, stealing them from other players, or locking them down by cementing control. Team members share money and properties. The game ends once all properties have been claimed and one team has the majority.
The game itself goes pretty quickly with properties bouncing back and forth and having spaces that take a player to the nearest unclaimed spot. As players share resources, discussing strategy is important as to stop overextension (as running out of money can start a brutal chain reaction). Out first game stayed rather even to the end, with it ending with a score of 9-7, a llama victory.
Where the game really fails is organization. The components include character pieces, dice, a property deck, 2 chance decks, a set of control tokens for each team, and some money (in two denominations, $100 and $500). To hold all this, you're given a basic bankers try for the standard monopoly game. This means besides the money, which only needs two of the slots, nothing fits right. And to further top it off, you can't keep it in the tray as the box is too short to allow the cards to remain upright in the slots, forcing a person to either throw everything together (either in the tray or loose in the box) or have a box that is unable to be closed all the way.

Read more
28 people found this helpful
Report abuse
See all reviews
Get FREE delivery with Amazon Prime
Prime members enjoy FREE Delivery and exclusive access to movies, TV shows, music, Kindle e-books, Twitch Prime, and more.
> Get Started
Back to top
Get to Know Us
Make Money with Us
Let Us Help You
And don't forget:
© 1996-2020, Amazon.com, Inc. or its affiliates