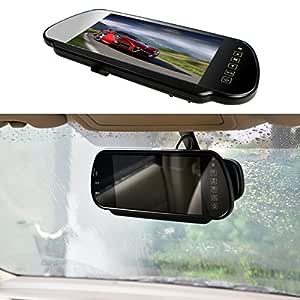 Auto trigger rear view when monitor is off

Sean A.
5.0 out of 5 stars Here's the best instructions you'll get!
25 September 2018 - Published on Amazon.com
Colour: 7" On-Mirror MonitorVerified Purchase
Okay hopefully I can write you guys the most helpful review on this. The instructions for this monitor are pure garbage and I reverse-engineered everything on it to help you guys. So I bought the 7-inch rear view mirror clip-on version of this monitor. All right so to break it down in a nutshell. You have three wires for the monitor. Negative, positive, and green for a reverse wire trigger input. The camera does not auto detect a video input to switch it to the reverse camera. It uses a switched positive input on the green wire to trigger the monitor to switch to the reverse camera. So what that means is kind of cool for me at least because I intend on using that trigger for a blind spot camera on my passenger side with a positive coming off the turn signal output on the steering column. So! If you have this monitor set up to an ignition hot, and you turn the car off, when you turn your ignition back on, you don't have to turn the monitor back on again manually, it will actually turn on back to the last input you had displayed when you shut the key off last time. If you have the monitor off when you turn the key off, when you turn the key back on the monitor will also be off again. Video quality is very decent especially for the resolution it gives you. Just bear in mind you have to get a decent camera, I bought a $20 camera and it looks like complete garbage compared to the other $20 camera I bought from a different seller on Amazon. (using this as a constant rear-view camera and a blind spot camera when it is triggered). There are two yellow RCA composite inputs. The male input is for AV1 and the female input is for AV2. The female input for AV2 is also the backup camera input. The monitor has brightness, contrast, hue, and a volume adjustment (which doesn't work but it's there, because there's no audio feed to adjust 😂😂) And one last part which I think is really cool, you can flip the image upside down, incase you have to install your camera upside down. All of the settings save automatically and individually for each input. For the $40 it's well worth it. I haven't officially installed the monitor yet, definitely not impressed with the spring loaded mounting clips, but that's still okay for what this unit does. I plan on using some 3M double-sided VHT tape on the actual glass of my existing rear view mirror in conjunction with the spring loaded clips. The monitor itself isn't very heavy and I don't feel that it's going to cause the rearview mirror to sag down when I go over bumps, at least hopefully for me because my mirror is stiff! Give me a like if this helps you guys so the future people buying this can see exactly how this thing works before purchasing 👍👍👍
Read more
7 people found this helpful

DaveF
3.0 out of 5 stars Great product, but mine didn't last as long as I had hoped.
13 February 2018 - Published on Amazon.com
Colour: 7" On-Mirror MonitorVerified Purchase
Purchased in Oct 2016, installed in February 2017.

Because of the layout of my cargo van interior, I can't see out the rear of the van so the rear view mirror is virtually useless. The van has a backup camera, but it only sees from the bumper level down. So, I have two problems: 1) Can't see what's behind me when changing lanes while driving (except through side view mirrors) and 2) when backing up, my field of view is only directly behind the van. In a parking lot, I would have to creep out slowly and depend on other cars to slow down or beep their horns, or always find a spot to park where I can pull through two adjacent spots so I'm always driving forward.

I installed this in my van in February 2017, along with a roof mounted camera. Image quality was okay, I like the size of the screen compared to the cheaper 4.3 monitors. The daytime is a much better image than the night time, although that could be due to the camera, not the monitor. There is an adjustment to turn up the brightness, which makes the night time view much better, but since this is a work van and is used primarily during the day, I left it the brightness turned down to look optimal during day time.

There's almost no reflectivity in the screen, so forget about using it as a mirror, but that's not a concern to me.

Since I used the monitor as a virtual rear view mirror, it gets about 4 hours of use per day, 6 days a week. This past October, the picture died. Because of my work schedule and my habit of putting things off, I didn't get around to diagnosing if the problem was the monitor or the camera until today. It's the monitor. When I press any of the buttons on the monitor, it beeps, but there is no display on the screen. My estimate is that I got about 6 months of heavy use out of it.

My feeling is that you get what you pay for, and I only paid $40 for a rear view monitor/mirror. I'm sure some of the monitors that come out of their factory work for years and some crap out sooner. I didn't get the good one. I'm over it.

While I'm not looking forward to pulling out the trim pieces in the car to replace the monitor, it's still a good instrument for folks who have cargo vans, trucks or any other vehicle layout where your rear view is restricted. I'm thinking of putting a quick disconnect connector into the wiring harness to make it easy to replace these monitors when they die, because compared to backing up into a pedestrian or hitting another car, $40 is a pittance and I've going to order a new one.

I'm only giving it a 3 star "It's Okay" review because I don't think it's the greatest quality. I have no argument with the seller, however, because I really dragged my feet about installing it and then troubleshooting it when it failed.

Henry H
1.0 out of 5 stars CANNOT SEE CLEARLY THE REAR AT NIGHT
2 September 2018 - Published on Amazon.com
Colour: 7" On-Mirror MonitorVerified Purchase
BOUGHT IT A YEAR AGO, AND JUST HAVE A CHANCE TO PUT ON MY CAR.CANNOT SEE CLEARLY THE REAR AT NIGHT. YOU WILL ONLY SEE THE CAR BEHIND AT DAYTIME. AT NIGHT YOU ONLY SEE THE UNCLEARLY LIGHTS FROM CARS ONLY. VERY DISAPPOINTED
Read more
2 people found this helpful

kerry
1.0 out of 5 stars Not happy.
24 February 2018 - Published on Amazon.com
Colour: 7" On-Mirror MonitorVerified Purchase
Product came with no instructions on how to install. Dose not come with a remote control and missing a piece. Not happy.
Read more
Go to Amazon.com to see all 13 reviews 3.4 out of 5 stars
Get FREE delivery with Amazon Prime
Prime members enjoy FREE Delivery and exclusive access to movies, TV shows, music, Kindle e-books, Twitch Prime, and more.
> Get Started
Back to top
Get to Know Us
Make Money with Us
Let Us Help You
And don't forget:
© 1996-2020, Amazon.com, Inc. or its affiliates