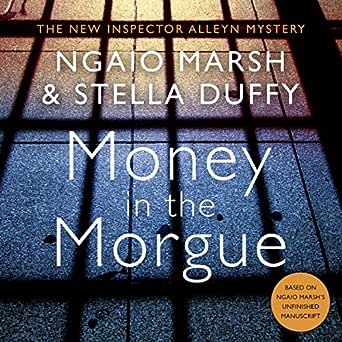 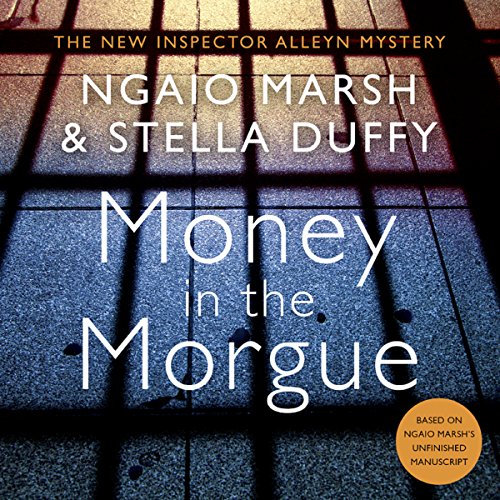 Money in the Morgue

Amazon Customer
3.0 out of 5 stars The writing does not do justice to the good story
Reviewed in Australia on 28 July 2019
Verified Purchase
While the character of Alleyn is recognisable and the plot is excellent, as one would expect of a Ngaio Marsh story, the writing is flawed by many solecisms in punctuation and syntax. Ngaio Marsh’s command of correct English was perfect. The writer of this book fails to live up to her standard.
Read more
Helpful
Comment Report abuse

Elizabeth M
5.0 out of 5 stars Great story and great audio
Reviewed in Australia on 14 March 2019
Verified Purchase
The story kept me engaged all the way through and I loved the voice of the lady reading it. She caught the New Zealand accent so accurately which, as this doesn't happen often or ever before!, made it so enjoyable to listen to. Thank you!!
Read more
Helpful
Comment Report abuse
See all reviews from Australia

P. Kirby
1.0 out of 5 stars Ngaio Marsh would be mortified
Reviewed in the United Kingdom on 5 April 2019
Verified Purchase
The plot and setting are suitably Ngaio-esque, but I'm afraid, for me, Stella Duffy hasn't captured Inspector Alleyn at all. Whereas Ngaio Marsh made him super-intelligent, crisp and occasionally sardonic, here he is just wordy and rather ordinary. But what makes this novel almost unreadable (for me, literally unreadable: I had to abandon it about a third of the way through because I just couldn't bear it any longer) is the awful habit of using commas to combine sentences that REALLY need a full stop, and an extremely un-Marshian way of tacking dialogue onto long paragraphs of narrative, separated only by a comma. And I don't just mean here and there: it happens over and over again, to the point where it jars on almost every page once Duffy has taken over from Marsh. From a punctuation point of view, it is truly badly written, full of errors that (I hope) would lose marks at GCSE level. And while this may not irritate everyone as much as it does me, I'm pretty sure Ngaio Marsh - whose written English was impeccable - would be absolutely mortified. I see The Guardian published a rave review of this novel but for me it just didn't work at all. Disappointing, because I would have loved Inspector Alleyn to live on.
Read more
6 people found this helpful
Helpful
Sending feedback...
Thank you for your feedback.
Sorry, we failed to record your vote. Please try again
Report abuse

Craig M Sisterson
5.0 out of 5 stars An extraordinary literary tag team
Reviewed in the United Kingdom on 8 March 2020
Verified Purchase
During the middle of last century, Dame Ngaio Marsh was one of the world’s most popular authors; a Queen of Crime alongside Agatha Christie, thanks to her mysteries starring Chief Inspector Roderick Alleyn. Money in the Morgue is an extraordinary literary tag-team between two theatre-loving Kiwi storytellers. A daring theft at a quarantine hospital in wartime Canterbury threatens to derail Inspector Alleyn’s counter-espionage work. Marsh scribbled the set-up during the war, and thirty-five years after the Dame’s death, Duffy seamlessly delivers an absorbing mystery woven with Golden Age stylings and a richly textured sense of time and place.
Read more
One person found this helpful
Helpful
Sending feedback...
Thank you for your feedback.
Sorry, we failed to record your vote. Please try again
Report abuse

June
5.0 out of 5 stars Excellent story based on chapters and notes left by Dame Ngaio Marsh
Reviewed in the United Kingdom on 15 November 2019
Verified Purchase
This is an excellent story based on a few chapters and even fewer notes left by Ngaio Marsh. It's a much fuller story than those in Dame Ngaio's other books and I think it's even better because the characters are better drawn. The only minor niggle is that Chief Inspector Alleyn refers to himself as Roderick in one chapter whereas, in the other Ngaio Marsh books, his family and friends and family call him Rory so I should have expected him to think of himself as Rory.
Read more
One person found this helpful
Helpful
Sending feedback...
Thank you for your feedback.
Sorry, we failed to record your vote. Please try again
Report abuse

S. M. Shaw
4.0 out of 5 stars Good but not Alleyn.
Reviewed in the United Kingdom on 13 January 2020
Verified Purchase
Slightly weird to be reading a Marsh that's been tinkered with. Not bad but not authentically Marsh & Alleyn could have been anyone. A good story but it's very hard to capture the right tone.
Read more
Helpful
Sending feedback...
Thank you for your feedback.
Sorry, we failed to record your vote. Please try again
Report abuse

Barbara Hembling
5.0 out of 5 stars A new N Marsh!
Reviewed in the United Kingdom on 11 March 2018
Verified Purchase
Great story. I always felt there weren't enough New Zealand war time stories. Reading this has completed that period for me.
Read more
3 people found this helpful
Helpful
Sending feedback...
Thank you for your feedback.
Sorry, we failed to record your vote. Please try again
Report abuse

rosalind brunwin
4.0 out of 5 stars very much to enjoy in it
Reviewed in the United Kingdom on 17 March 2018
Verified Purchase
Its not up to the real authors standard, but nevertheless it is a most enjoyable and intriguing read; very much to enjoy in it.
Read more
One person found this helpful
Helpful
Sending feedback...
Thank you for your feedback.
Sorry, we failed to record your vote. Please try again
Report abuse

F. M. Stockdale
1.0 out of 5 stars Yet another pastiche using old characters
Reviewed in the United Kingdom on 5 April 2018
Verified Purchase
It's a pity. What went seriously wrong with this book was the tortuous attempt to spatchcock another author's main character into a theoretical "finishing" of an uncompleted draft. The best bit actually was the first 50 or so pages of set-up: clear and interesting. Thereafter things spiralled downhill, with curiously unsuccessful crowd scenes mixed with Alleyn's ceaseless references to Midsummer Night's Dream. Was he really such a pretentious bore? I liked the early Marsh books.
But the fact remains that the current craze for revisiting other authors' characters is a serious blight. The attempts at Poirot and Wimsey are by far the worst and there are occasional successes (Faulks's Jeeves and the Wedding Bells, Horowitz' House of Silk). But what happened to original work?

Kitty Kat
5.0 out of 5 stars Ms Duffy has written a book that the esteemed Dame would be proud of!
Reviewed in the United Kingdom on 12 March 2018
Verified Purchase
I’m a bit of a fan of Inspector Alleyn so I was beyond excited to find out that a new story had been published. Stella Duffy has taken on the task of turning a few chapters by Ngaio Marsh into a book. And she has succeeded brilliantly. She has caught the mood of the time- wartime New Zealand under threat from the Japanese and young men sent far from home to fight for the ‘Home’ country. She has also captured the English detective perfectly.
Alleyn has a gentle, calm and understated style of detecting. Having been sent to Mount Seager Hospital on secret wartime business, he does not expect to be drawn into dealing with a payroll theft and death over the course of one long night in the seemingly quiet backwater. So many of the characters have something to hide, fears and secrets. There were surprises that had my jaw dropping and just when I thought I had it worked out Stella Duffy had me fooled again. I loved it. This book has given me hope that there will be more Inspector Alleyn Mysteries to come. Ms Duffy has written a book that the esteemed Dame would be proud of!

Vee Crowther
1.0 out of 5 stars Disappointing and not for me.
Reviewed in the United Kingdom on 13 April 2018
Verified Purchase
I found this disappointing, the character using the name of Roderick Alleyn in this book bears no relation to Ngaio Marsh's Roderick Alleyn. I like and enjoy all Ngaio Marsh's books, some more than others, but I got bored with this book and struggled to finish it. I've no idea how much of the book was Ngaio Marsh's but she must have had a reason for not developing the plot further.
Read more
5 people found this helpful
Helpful
Sending feedback...
Thank you for your feedback.
Sorry, we failed to record your vote. Please try again
Report abuse

AD
3.0 out of 5 stars Interesting experiment
Reviewed in the United Kingdom on 3 May 2018
Vine Customer Review of Free Product( What's this? )
I am a fan of Ngaio Marsh and Roderick Alleyn so was interested to read this. I also enjoy Stella Duffy's writing so hoped this would be a good mix.
First the set up. There are a couple of books set in war time New Zealand and this one presumably was expected to sit within the series. I had a re Kew copy so don't know if there was much explanation of what was Marsh and what Duffy, but I'm presuming the setting and premise were Marsh.
Like the others, Colour Scheme and Died In The Wool, she vividly describes the country, for these are not set in Christchurch or Wellington but in rural stations and settlements. The natural environment therefore is also a character in the books, with storms and difficult terrain part of the claustrophobic setting. The harsh beauty of NZ is clearly realised, and the sense of a country evolving from a colonial feudalism towards a clear independent identity is one of her repeated themes. Hierarchy of class and levels of Britishness, links to 'home' and loyalty to Britain whilst simultaneously resenting its superiority and kindly condescension are all part of underlying emotion and tension. The travails of a country at war, the pressures of people forced together and petty territorial disputes ratchet up tension until the inevitable murder.
Then, hmm. The plot moves along - there are holes but it does deliver with twists. I'm just not convinced about Alleyn. Yes he's there on intelligence work. Yes he does do that tiresome disguise thing in other books but he isn't normally quite so loquacious and one noted. He is well read, and upper class, but normally speaks appropriately and politely, doesn't keep quoting to someone who doesn't get the allusions, isn't so samey in his interactions. It is a weakness of some of Marsh's books that interminable interviews dominate over action but I dunno. He just wasn't Alleyn to me, and the shame of it is this would probably be a very enjoyable book for anyone who didn't know Marsh's work or if Stella Duffy had written him as an original character. There is much to commend, the community is well realised, the irritating characters properly irritating, the twists good. So an interesting experiment that didn't quite work for me but I'm glad she tried.