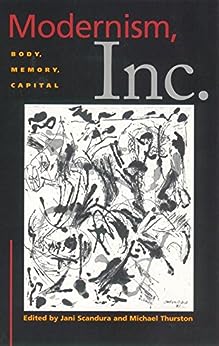 Drawing on a variety of interdisciplinary debates in cultural studies and contemporary theory, Modernism, Inc. provides a new look at the relationship between modernism and postmodernism within the critical frame of twentieth-century American culture.
Organized around the idea of "incorporation"--embodiment, repressed memory, and advanced capitalism--Modernism, Inc. covers a wide range of topics: Josephine Baker's "hot house style"; the president's penis in American political life; myth-making and the Hoover Dam; trauma, poetics, and the Armenian genocide; feminist kitsch and the recuperation of North America's "Great Lady painters"; Gertrude Stein and Jewish Social Science; the Reno Divorce Factory and the production of gender; Andy Razaf and Black Bolshevism. Collectively, the essays suggest that the relationship between the modern and the postmodern is not one of rupture, belatedness, dilution, or extremity, but of haunting.
Modernism, Inc. looks at our ghosts, and at the unspeakable secrets of modernity from which they're derived.
Contributors: Maria Damon, Walter Kalidjian, Walter Lew, Janet Lyon, William J. Maxwell, Cary Nelson, John Timberman Newcombe, David G. Nicholls, Thomas Pepper, Paula Rabinowitz, Daniel Rosenberg, Marlon Ross, Jani Scandura, Kathleen Stewart, Julia Walker.

""Fetching volume of thirteen radiant interventions."" --This text refers to the paperback edition.

Jani Scandura is Assistant Professor of English at the University of Minnesota.

Michael Thurston is Assistant Professor of English at Yale. --This text refers to the paperback edition.