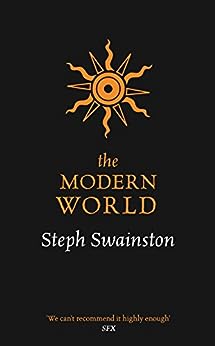 by Steph Swainston (Author) Format: Kindle Edition
See all formats and editions
Sorry, there was a problem loading this page. Try again.

In the third of the Castle novels, Steph Swainston takes the reader ever deeper into a world of beauty and terror. . .

The endless war for survival against the merciless Insects has reached yet another stalemate for the Circle, the immortals who serve the Emperor of the Fourlands. The building of a massive dam has driven the Insects back, but it's only a matter of time before they find another way to advance.

Jant, the Emperor's winged Messenger, is called away from battle to find the daughter of fellow immortal, Lightning. Cyan has gone missing in the city of Hacilith, and Lightning wants him to bring her back. But Jant knows better than anyone just how much trouble a teenager can get into in Hacilith's underworld . . .

So begins a hectic quest. A quest that will take Jant back to his past, back to the bizarre world of the Shift and, eventually, back to the Fourlands. Just as it faces a terrifying new threat.

Swainston's third novel is an impressive illustration of how fantasy does not have to be imitation Tolkien. - The GuardianThe Modern World is another welcome glimpse into a fantasy world so aggressive it could knock seven shades of Hell out of most entries in the genre. We can't recommend it highly enough. - SFXSteph Swainston's writing is as elegantly superior to most other fantasy as a samurai sword is to a flint daggerHonest-to-god unputdownable. A blistering debut (THE YEAR OF OUR WAR) --This text refers to an alternate kindle_edition edition.

Steph Swainston is a qualified archaeologist with a degree from Cambridge and a research degree. She worked as archaeologist for six years, working on the dig that researched the oldest recorded burial site in the UK, before working as an information scientist. She lives in Wokingham --This text refers to an alternate kindle_edition edition.

Steph Swainston is a qualified archaeologist with a degree from Cambridge and a research degree. She worked as archaeologist for six years, working on the dig that researched the oldest recorded burial site in the UK, before working as an information scientist. Her Castle novels have been highly praised by authors and critics alike. She lives in Wokingham. --This text refers to an alternate kindle_edition edition.

The third of the Castle novels from new fantasy sensation Steph Swainston. --This text refers to an alternate kindle_edition edition.
Read more

S. Bentley
4.0 out of 5 stars People change, insects change, worms go on forever
Reviewed in the United Kingdom on 21 March 2010
Verified Purchase
The Modern World is the third of the Castle stories and as such would be a bad place for a new reader to start. There is much reliance on readers being familiar with the Shift, the Vermiform and the Circle, and though I would never discourage anyone from starting where ever they liked in the sequence, I think the book is more satisfying when taken as the culmination of the story begun in The Year of Our War.

For newcomers, Steph Swainston's work will appeal to fans of Mervyn Peake, M. John Harrison, Michael Moorcock's Dancers at the End of Time and China Mievelle, with its fantasy world given immediacy by all too human characters and a shot of the new weird, through alternate realities entered through drug use, and an implacable insect enemy seemingly borrowed from Robert Heinlein.

In this story we begin with Jant being sent to retrieve Saker's daughter Cyan, who has run away from home to get up to unsavoury acts as teenagers whose fathers are centuries old immortal archers are wont to do. We are immediately reacquainted with Jant's bad past, his self-deception and his weakness but also his sense of humour and the humanity that his faults give him. He thinks he sees far from his lofty vantage point, up in the air on those wings of his, but in many ways he's as deluded as anyone else. But once Cyan is brought back to the fold, the story really stops being about Jant and becomes more about the threat of the insects and the fate of Lightning.

In this book, the threat of the insects becomes the greatest it has ever been. Their behaviour shifts, and a mistake by one of the Circle of Immortals, an act of pride, threatens to allow the Fourlands to finally be overrun. To deal with this, the Emperor San himself finally enters the fray and it was definitely not what I was expecting.

Swainston's tales have from the start pointed to the downsides of wanting immortality, that it becomes an end to itself, and that is once again fully explored here. The Circle is not shown in its best light, save in Rayne and Lightning. At the same time, the nature of the Shift in relation to the Fourlands is teased out a little more.

Unlike in the previous two books and fitting well with the sense of power on the wane, Jant's sexual encounters are tinged with embarrassment and he is less braggy. Certainly the ending brings an interesting shift to Jant's insistence that immortals do not change because their bodies do not.

The Modern World is as well written both stylistically and plot-wise as the previous two books. It is highly enjoyable and I read it over the course of two evenings, all three hundred odd, densely typeset pages. That Above the Snowline is Jant's origin story and that the next novel will supposedly not deal with Jant is interesting, as one could say that the Fourlands feels too well mapped now, too cohesive that future novels might lack the ability to surprise as the previous novels and this one have.
Read more
One person found this helpful
Report abuse

David Brookes
4.0 out of 5 stars "The Modern World"
Reviewed in the United Kingdom on 2 November 2009
Verified Purchase
Great stuff! Swainston manages to keep her imaginitive world feeling very fresh and interesting. We learn so much more about the secondary characters and really get to feel some of what they're going through. The story starts quickly and with wondrous skill, making this a fantastic read.

Definitely read the others first, as they're important to the characters and the plot, but don't wait before reading this third instalment!

Harry
5.0 out of 5 stars An excellent third
Reviewed in the United Kingdom on 10 September 2013
Verified Purchase
If you enjoyed the world of The Year of Our War, and No Present Like Time, but we're frustrated by the fact that there was so much more you didn't know, buy tis book.

No just a continuation of Jant's adventures, this adds a depth and familiarity with Swainston's world that has always been needed.

Edward de Vries
5.0 out of 5 stars Steph Swainson is amazing!
Reviewed in Canada on 16 December 2017
Verified Purchase
What a great series! Rich worlds, deep characters, odd yet wonderful storylines. Always keeping you guessing and keeping it interesting. Can’t wait for the next!!
Read more
Report abuse

Michael Anderson
4.0 out of 5 stars Consistent
Reviewed in Canada on 6 January 2013
Verified Purchase
Nice to be able to get the book separate from Omnibus. Great book and follows up the series, great author.
Read more
Report abuse
See all reviews
Report an issue
Does this item contain inappropriate content?
Report
Do you believe that this item violates a copyright?
Report
Does this item contain quality or formatting issues?
Report