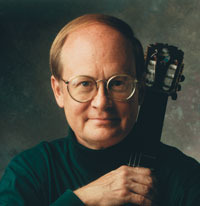 by Mel Bay (Author)
4.6 out of 5 stars 156 ratings
See all formats and editions
Sorry, there was a problem loading this page. Try again.

The world's premier method for learning modern plectrum style guitar, time-tested and proven successful in building the theoretic and technical foundation needed to play in any style. All seven grades of this method are written in standard notation only to encourage better sight reading. In Grade 1, the student guitarist will learn to play solos, duets, scales, and chords in the keys of C, A minor, G and E minor. Even in Grade 1, the student is already exposed to the chord/melody concept of guitar performance. A supplementary study book entitled Grade 1 Studies, two different play-along audio recordings (pop version and traditional), and a video are available. The companion recordings feature Tommy Flint and William Bay playing in split-track format, with the solo parts performed on the right channel, and the accompaniment or second duet parts played on the left. The student can play along with the full recording, or tune out either channel and play the missing part.
Read more
Previous page
Next page

I was 17 years old teaching at Ernie Ball's Guitar Shop in Tarzana, California. That's where I met Mel Bay through a workshop he taught. It was then that I took myself through his 7 book guitar method the first time which was very instrumental toward my professional training. Now, all these years later just I completed the updated expanded edition of the 7 book method. It is a beautiful workout and journey of graded material including: 1. Reading studies in all keys and positions. 2.Beautiful chord melodies ranging from classical to folk, blues, jazz and latin in style. 3. Theory is an integral part of this method presenting harmonized chord forms, studies in thirds and triads and quartal harmony in all keys. 4. Technical development and challenge and strong musicality frame this great work. This production is in my opinion the consumate guitar method which I recommend as a must to all serious guitarists. Congratulations to William Bay for this masterpiece. --Michael Anthony

Mel Bay was born on February 25, 1913 in the little Ozark Mountain town of Bunker, Missouri. He bought a Sears Roebuck guitar at the age of 13 and several months later played his first "gig." (He recalled playing until his fingers were raw!) Mel took up the tenor banjo shortly thereafter and continued to play both instruments. During his teenage years Mel played with a wild assortement of bands and characters in rural Missouri. Perhaps no "gig" was as strange as the job he landed with, in Mel's words, "a snake oil salesman." This flamboyant peddler would pull his ostentatious Pierce Arrow automobile, complete with steer horns mounted on the grill, into the center of a small, rural town. Mel would sit on the car and play up a storm on the tenor banjo. After a crowd gathered, the peddler took over and began extolling the merits of his "wonder elixer." In 1933 Mel Bay moved to St. Louis and began his professional career. He played with numerous local and traveling bands. In addition, he landed staff guitar jobs on several radio stations. Mel fronted his own trio (piano, bass, guitar) and played steadily for 25 years! He was equally adept on most fretted instruments and played mandolin, uke, Hawaiian guitar, tenor and plectrum banjo professionally. While Mel was actively pursuing his playing career, he continued to teach as many as 100 students a week. He decided to begin writing instructional materials due to the difficulty encountered by guitarists at playing good sounding chord forms in rhythm sections and due to the poor note reading ability prevalent among guitarists. After the war Mel was asked to write instructional materials on guitar for GI's wanting to learn music under the GI Bill. In 1947 Mel formed his own publishing company and wrote his landmark initial book titled The Orchestral Chord System for Guitar. (This book is still in print under the title Rhythm Guitar Chord System and continues to be one the finest rhythm guitar chord texts available!) His Modern Guitar Method was penned shortly thereafter. For years Mel traveled from town to town talking to guitar teachers and players and showing them his publications. At one time Mel claims to have known virtually every guitar teacher in America on a first name basis! The guitar and Mel Bay books caught on in a big way in the 1950's. Things have continued to grow ever since. Mel used to sell D'Angelico guitars. At any given time he would have 5 or 6 "lying around the house." Mel played professionally on his New Yorker model but his favorite was the initial Mel Bay Model crafted as a gift for him by John D'Angelico. This famous guitar had all of the main features of the New Yorker but was a "cut away" model and had a slightly thinner neck. This instrument has been pictured on the Mel Bay Modern Guitar Method for decades. Someone once calculated that sales of guitar books written by Mel Bay have exceeded 25 million copies. When asked, Mel frequently said that he quit counting long ago. Sales of his Modern Guitar Method have alone surpassed the 7 million mark. It is safe to say that Mel Bay is one of the pivotal figures in the world of guitar music and instruction in this century.
Tell the Publisher!
I’d like to read this book on Kindle

4.6 out of 5 stars
4.6 out of 5
156 global ratings
How are ratings calculated?
To calculate the overall star rating and percentage breakdown by star, we don’t use a simple average. Instead, our system considers things like how recent a review is and if the reviewer bought the item on Amazon. It also analyses reviews to verify trustworthiness.

liarliar
5.0 out of 5 stars great book
Reviewed in the United Kingdom on 27 February 2012
Verified Purchase
I bought this to re-begin teaching myself guitar, having abandoned it a few years ago. It's great for learning how to read music rather than tabs.
Read more
Report abuse

TracyLou27
5.0 out of 5 stars Excellent value
Reviewed in the United Kingdom on 14 September 2013
Verified Purchase
Book was just as described and a perfect manual for my son to get started with. Hasn't put his guitar down since it arrived.
Read more
Report abuse

Blade
5.0 out of 5 stars Five Stars
Reviewed in the United Kingdom on 20 November 2014
Verified Purchase
Great book.
Read more
Report abuse
See all reviews
Back to top
Get to Know Us
Make Money with Us
Let Us Help You
And don't forget:
© 1996-2022, Amazon.com, Inc. or its affiliates