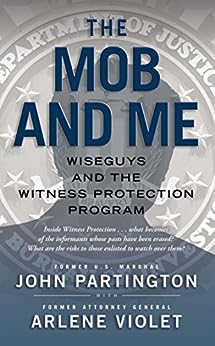 The Mob and Me: Wiseguys and the Witness Protection Program Kindle Edition

"Dick Hill does his usual excellent work narrating this first-person account of the origin of the Witness Protection Program.... [He] is completely convincing as Partington." ---AudioFile --This text refers to an alternate kindle_edition edition.

When U.S. Marshal John Partington suddenly found himself protecting the family of renowned mobster Joe The Animal Barboza, he made up the rules as he went along. Among Partington's diverse activities: managing a rotating crew of U.S. Marshals; chasing the family cat; convincing Barboza's wife not to leave; keeping the witness, his wife, and their child alive; and transporting the witness to and from hearings in the face of death threats. Unbenownst to him, this experience would lead to his becoming one of the founders of the Witness Protection Program. Partington shares his unique journey here for the first time. Providing a step-by-step account of exactly what it was like to guard and transport informants, as well as details about the process of identity change, The Mob and Me shows the development and evolution of the Witness Protection Program. Other informants Partington eventually guarded include Bob Leuci (The Prince of the City cop memorialized in the movie of that name), Watergate figures Howard Hunt (whose son claims he was hired to kill JFK) and John and Maureen Dean, antiwar protester Father Dan Berrigan, and numerous other notables. Filled with insider information on dozens of mobsters and other informants, The Mob and Me answers the question, What are these(more...) --This text refers to an alternate kindle_edition edition.

John Partington (d. 2006), a former commissioner of public safety in Providence, Rhode Island, participated in the formation of the Witness Protection Program in the 1960s. Arlene Violet is a former attorney general of Rhode Island and the author of "Convictions: My Journey."
Reader of over four hundred audiobooks, Dick Hill has won three coveted Audie Awards and been nominated numerous times. He is also the recipient of several "AudioFile" Earphones Awards. "AudioFile" includes Dick on their prestigious list of Golden Voices. --This text refers to an alternate kindle_edition edition.
Read more

Rick Shaq Goldstein
4.0 out of 5 stars RICK "SHAQ" GOLDSTEIN SAYS: "THE UNVARNISHED TRUTH ABOUT BAD GUYS WHO WERE SOMETIMES GOOD & GOOD GUYS WHO WERE SOMETIMES BAD"
Reviewed in the United States on 4 December 2010
Verified Purchase
This is a firsthand look "behind-the-curtain" of the infamous *WITNESS-PROTECTION-PROGRAM". The tour guide on this always interesting trip is the author and former U.S. Marshal John Partington. Unfortunately, John passed away on February 10,2006 and due to the straightforward, sincere nature of his narrative you'll feel like you lost a new friend. In 1967 John was involved in helping create the original and at times controversial *WITNESS-PROTECTION* program at the request of Bobby Kennedy. As this was a brand new daring tool in the attempt to defeat organized crime, there was a treacherous learning curve. At times John had to adlib while balancing the lives of informants and their families in his hands. As the scope of the *WITNESS-PROTECTION-PROGRAM* grew... the severity of the program's responsibilities expanded from protecting the informants and their families leading up to the trials... to protecting the witnesses on the way to the courthouse... in the courthouse... leaving the courthouse... and eventually creating an entire new persona... which included new names... new family histories... new social security cards... educational records for children... detailed role playing scenarios for young children... and entry into a new job out of their prior criminal enterprises. As this fledgling organization gained experience in this heretofore unexpected... and always potentially deadly myriad of ramifications that constantly reared their ugly head... the government even had to incorporate an entire psychological support group. All of this and more was accomplished in hideaways located in prisons... on remote islands... on military bases... in mountain cabins... etc.... and due to threats, many witnesses and families had to be shuttled between many of these locations at the drop of a hat.

As exhilarating as this portion of the book alone is... the true character and personality of these witnesses... which ranged from psychopathic hit men to highly intelligent financial wizards... to poor "schleps" forced into this life, either by unwanted circumstance... or a gambling addiction... are all described by John based on his almost 24/7 involvement with them for days/weeks/months at a time... which forced their real inner character to be displayed. What is yet another level of excitement for the reader is the uncovering of all the corruption not only in different police departments... but the FBI and government as well. And to John's never ending credit... he never tries to hide from it. Some of the ways this corruption raised its ugly head was when a particular witness needed additional law enforcement protection when strong death threats to witnesses and their families were made, and depending on the jurisdiction they were being hidden in... the witness might say we can't use the local cops... or a specific FBI office... because the protected "bad guy" knew the mob had had members of those organizations on "the-pad"... so they couldn't be trusted.

As an added "cherry-on-top" for a reader like myself who enjoys reading about organized crime... are all the mob nicknames. Here are just a few for you to wet your appetite:

Lori Manni
5.0 out of 5 stars Tales from Little Rhody
Reviewed in the United States on 31 July 2011
Verified Purchase
John Partington and Arlene Violet did an incredible job in this writing. Of course, being a native Rhode Islander, I was very familiar with the characters. The detail was so alive. I felt like I was in the room with them. Congratulations on both this book and the incredible musical that I had the privelege to see in Providence, RI!
Buon lavoro!
Read more
One person found this helpful
Report abuse

J. Williams
3.0 out of 5 stars interesting read and worth it but only mildly insightful
Reviewed in the United States on 15 March 2014
Verified Purchase
The author has some interesting stories that are sort of like listening to someone while you are fishing with them.
Read more
One person found this helpful
Report abuse
See all reviews
Back to top
Get to Know Us
Make Money with Us
Let Us Help You
And don't forget:
© 1996-2021, Amazon.com, Inc. or its affiliates