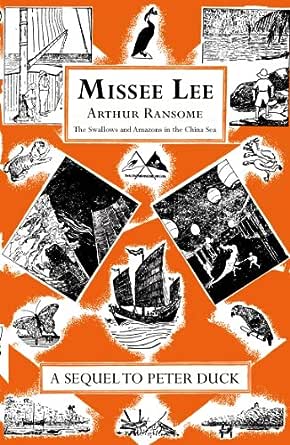 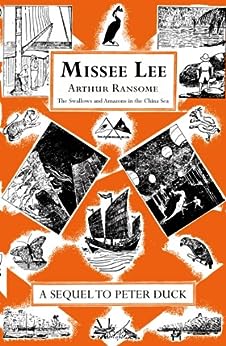 There is plenty of excitement, a little danger, a quality of thinking, planning and fun which is delightful and stimulating, Times Literary Supplement

He makes a tale of adventure a handbook to adventure, Observer --This text refers to an alternate kindle_edition edition.

Arthur Ransome was born in Leeds in l884 and went to school at Rugby. He was in Russia in l917, and witnessed the Revolution, which he reported for the Manchester Guardian. After escaping to Scandinavia, he settled in the Lake District with his Russian wife where, in l929, he wrote Swallows and Amazons. And so began a writing career which has produced some of the real children's treasures of all time. In 1936 he won the first ever Carnegie Medal for his book, Pigeon Post. --This text refers to an alternate kindle_edition edition.

The Swallows and Amazons have finally met a real pirate - the tiny, pistol-carrying Missee Lee, who has rescued them after their shipwreck off the coast of China. The only trouble is she wants to keep them... for ever. --This text refers to an alternate kindle_edition edition.

terry
5.0 out of 5 stars Swashbuckling Nancy!
Reviewed in Australia on 6 May 2015
Verified Purchase
Swallows & Amazons take to the high seas & encounter pirates in the seas off China & are embroiled in a political battle pirate style.

Very unlike previous books in the series except may be Peter Duck, & a very compelling adventure yet again. . I do get annoyed at those Chapter headings that give the game away. Anyway, this is an excellent series ( still too expensive Amazon!). Thanks Arthur Ransom.

Susan Walker
5.0 out of 5 stars a wonderfull piece of escapism
Reviewed in the United Kingdom on 21 March 2016
Verified Purchase
I read all of these books as a child and totally loved them. I have picked them up again now in my late 50s after buying a book called "in search of swallows and amazons" while on holiday in the lake district. I didn't know if I really wanted to read the actual books again as I didn't want to spoil the good memories if they weren't as good as I remembered, and perish the thought that I might not like them now or would find them too childish! But in the end I thought I would get just one on my kindle for old times sake, and now in the space of a couple of weeks I've read them all again and thoroughly enjoyed them. Yes the language they use is a bit old fashioned, and they are about children playing pretend, but that is part of the enjoyment. This book, Missee Lee, is one of the two fantasy adventures (along with Peter Duck) which I now understand are meant to be stories the children made up in the winter when they couldn't be out sailing, I didn't quite get that when I was 9! And in fact I think my adult self prefers to pretend that they are real adventures just like the ones on the lake in the north.
So for anyone else in my position who cant decide whether to go back and relive some fond memories, my advice is do!

Gael
2.0 out of 5 stars Unpleasant to say the least
Reviewed in the United Kingdom on 6 July 2020
Verified Purchase
I grew up reading all the Swallow and Amazons books which I love, and had been raiding my daughter's bookcase during the Lock Down. I had not read this so downloaded a Kindle edition. I really wish I hadn't.

This is a product of its time and the narrative reflects that; it does not make comfortable reading in the 21st Century and thankfully much of the world has moved on. I also found the capture of the children and Captain Flint actually a little triggering. Again these were descriptions that would have been considered fun 'derring do' in the mid 20th Century when the world was far more insular and tales of danger were exciting, but a remote and maybe even an abstract concept. But with our access to information about the atrocities that occur around the world, I found it very difficult to detach the story from the very real perils that people actually do still suffer on a daily basis.

And despite the theme, I found the story rather dull and repetitive; I got to about two thirds through and skipped to the last few pages to check that it all turned out OK in the end; thankfully it did.

Incidentally, I think that Arthur Ransome was a fabulous writer for children, and having re-read all of his work I cannot praise him enough and in retrospect I have come to appreciate just how much I learned from his books. He wove the most beautiful descriptions about the landscape, mining, sailing, language, social life in the 30s, poetry, geography, etc into his stories. Incredibly informative but without being dull or patronising. I just didn't like Missy Lee, but that is more about me and the time that I live in.

Arthur of the Amazons
5.0 out of 5 stars I love the S and A books
Reviewed in the United Kingdom on 24 August 2020
Verified Purchase
this is a fab Missee Lee Alison Larkin unabridged version
Read more
One person found this helpful
Report abuse

P G
4.0 out of 5 stars Not the best
Reviewed in the United Kingdom on 4 February 2014
Verified Purchase
Something just doesn't gel for me like Ransome's other books in the series. A curiosity compared to the flow of the story in the rest of the collection. The Kindle edition I downloaded also misses the last paragraph of my hardback which comes after "The End", where the fitting out of the junk with navigation equipment and arrival at St. Mawes is described.
Read more
3 people found this helpful
Report abuse

Brian Rowe
3.0 out of 5 stars Missee Lee!
Reviewed in the United Kingdom on 29 January 2014
Verified Purchase
I'm afraid that I didn't enjoy this as much as the other 'Swallows' books.
I found it rather dark (after the childish innocence of the others'.)
My favourite (which I have read & re-read several times is 'Winter Holiday' and which I heartily recommend).
Read more
3 people found this helpful
Report abuse
See all reviews
Get FREE delivery with Amazon Prime
Prime members enjoy FREE Delivery and exclusive access to movies, TV shows, music, Kindle e-books, Twitch Prime, and more.
> Get Started
Back to top
Get to Know Us
Make Money with Us
Let Us Help You
And don't forget:
© 1996-2020, Amazon.com, Inc. or its affiliates