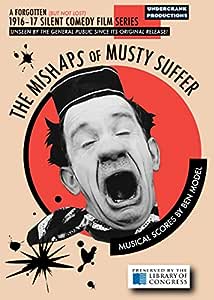 The Mishaps of Musty Suffer: Volume 1

The Mishaps of Musty Suffer was a series of comedy shorts released weekly, in three series of ten films, from 1916-17. It was popular, successful and well-reviewed... and yet it is almost completely forgotten today. Playing Musty Suffer was Ziegfield Follies headliner comic Harry Watson, Jr... also forgotten. 24 of the 30 "Musty" films survive and have been in the collection of the Library of Congress since 1959 but are rarely seen. The films are hilarious, full of cartoony and surreal settings and slapstick, and have a circus influence. This DVD contains 8 of the best of the surviving Musty shorts, seen for the first time ever on video in new HD transfers from master material preserved by the Library of Congress, and featuring brand new musical scores by Ben Model. THE FILMS: "Going Up" (1916) - "The Lightning Bellhop" (1916) - "Just Imagination" (1916) - "Blow Your Horn" (1916) - "While You Wait" (1916) - "Local Showers" (1916) - "Outs and Ins" (1916) - "Spliced and Iced" (1917) - "Hold Fast" (excerpt) (1916) - "Capturing Chicago" (1916) - BONUS: image gallery. Region 0. [Note: This product is an authorized, licensed DVD and is manufactured on demand]