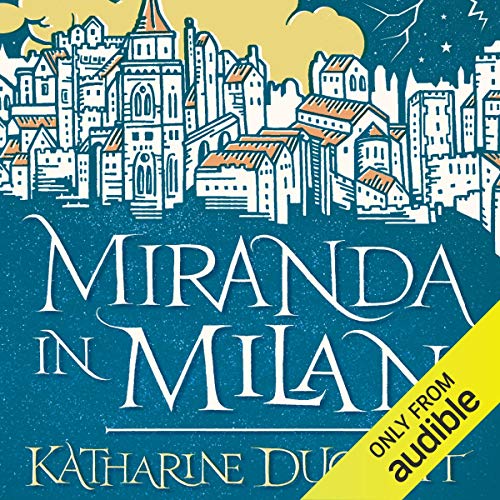 Amazon Customer
5.0 out of 5 stars A wonderfully satisfying conclusion to what happens after the rescue
Reviewed in Australia on 16 June 2019
Verified Purchase
Reimagines what happens after Miranda and Prospero are rescued from their island exile in The Tempest.

After returning to Italia Miranda finds herself in Milan virtually a prisoner on her father's estate, separated from Naples' prince Ferdinand and isolated within the castle ignored by her increasingly absent father, and an object of fear by the servants who see in her the nightmare visage of her mother. Only the foreign servant Dorethea, another outsider, show her any kindness and helps her discover the terrible secret that saw her father banished and defeat the monster that holds them captive.

Katharine Duckett's first novella is a Shakespearean tapestry woven from the threats of these characters first revealed in the Tempest and developed further. The tale unfolds with the steady beats of gothic horror with a mystery revealed and villain faced and finally defeated, but the greatest victory reserved for Miranda herself who makes the choice to embrace the woman she wants to be, not the naïve child we meet in the Tempest.

It's enjoyable to see these characters remaining true to those sketches from Shakespeare's play, consistent but so much richer for their interactions and meetings in Miranda in Milan. For those who like Shakespeare but wanted more, this is a worthy satisfying read.
Read more
Helpful
Report abuse
See all reviews

Jess Gofton
5.0 out of 5 stars Shakespeare meets Guillermo del Toro in this gorgeous novella
Reviewed in the United Kingdom on 12 April 2019
Verified Purchase
I was looking forward to the release of this debut novella, a sequel to William Shakespeare’s The Tempest that promised a queer heroine and dark magic, as soon as I heard about it. I got what I was promised and more, and I loved it.

I’m always a little wary of stories that retell Shakespeare in some way, not because I don’t think it can be done well but because I haven’t really enjoyed any that I’ve read in the past. I was even more wary of this one because I never studied The Tempest at school or at university, and even though I know the basic storyline I’ve never actually read or seen it at all, so consider me relieved when it became clear that I didn’t need an in-depth knowledge of the play to enjoy this novella.

Finally free of the island Miranda has known her whole life and betrothed to the future King of Naples, Miranda and her father, Prospero, are able to return to their Milanese home. Miranda can’t remember Milan nor the mother who died there when she was still an infant, and when she arrives she doesn’t receive the warm welcome she expects; she’s forced to cover her face with a veil as the people at court whisper ‘ghost’ behind her back, kept in her room after a lifetime of living beneath the stars and surrounded by servants who are afraid to be near her.

As her father begins his quest for power in Milan and Miranda waits to be sent to Naples, she finds companionship in the one maid who isn’t afraid to befriend her, Dorothea, a self-proclaimed witch of Moorish descent who’s lived her life moving from place to place, picking up whichever language she needs to master in order to keep her head down, make a living and escape the Inquisition. When Miranda and Dorothea begin to uncover the truth behind Prospero’s exile all those years before and what truly happened to Miranda’s mother, what unfolds is a Gothic tale of power and ghosts as Duckett puts Miranda at the centre of the story, where she always should have been.

I bloody loved this novella. The writing was simple but beautiful, and made perfect sense considering Miranda hasn’t been raised at the Milanese court amidst masked balls and courtly intrigue. She spent her childhood running barefoot and wild on an undiscovered island, and though Prospero has always dreamed of returning to Milan, Miranda barely knows it, and instead spends this novella yearning for the sea.

Now that she’s a woman she’s expected to take her place amongst the Italian nobles and become Queen of Naples, but at heart she’s still a wild girl and it’s only when she’s taken from the island and thrust into the dreary castle in Milan that she realises the island already had everything she wanted. The life she’s now living is the life her father has always longed for, and Miranda is starting to realise just how much her life is no longer her own. On the island she could run free as she pleased, but now that they’ve returned to Italy she’ll be forced to spend her life under constant scrutiny, which would be easier if the Milanese people weren’t afraid of her face.

This novella had the perfect balance of character growth and plot for me. I loved the Miranda that Duckett brought to life, a girl so often overshadowed by Prospero, and Dorothea is a charming character who, as well as being a believable woman in her own right, also served as a reminder of how multicultural Europe was during this period of history.

Whether you’re familiar with Shakespeare or not, if you love stories about magic and motherhood and queer women in a historical setting, Miranda in Milan is a novella you need to get your hands on.
Read more
Report abuse

M. Hepworth
5.0 out of 5 stars Charming, mysterious, intruiging
Reviewed in the United Kingdom on 30 March 2019
Verified Purchase
I think it takes a certain level of self-assurance to take Shakespeare's iconic characters and write your own continuation of their story, but this version works nicely. It picks up the tale of Miranda as she arrives in Milan in the train of her father's triumphant return. It's quickly clear that all is not right - she's engaged to a prince after growing up wild on an island, the Milanese treat her with great mistrust, a mystery surrounds her late mother,her father is clearly not who she thought he was...

There's a nice romance as Miranda finds someone other than her distance prince - I'm often a bit meh on romance but I rather liked this one, as it worked to create a realistic relationship and reveal the characters.

This is really nicely written, an interesting concept that takes a different direction from some others I've seen but is justified by the source material, and the lead characters grabbed me.
Read more
Report abuse

Jennifer L.
2.0 out of 5 stars Full of 'sweet air' but not much else
Reviewed in the United States on 19 March 2020
Verified Purchase
I was very excited for this book, and I ordered it as part of my 'pandemic stash'. Color me disappointed that the concept is better than the execution. I was originally intrigued by the idea of continuing along with Miranda, who really does get a short shrift in The Tempest. Contemporary feminist interpretations of classic characters can be done super well, illuminating both past and present societal flaws.

Unfortunately, this Miranda is everything and nothing. On the one hand, we're meant to identify with her as she unspools her suppressed trauma, trauma that arises from years of Prospero's abuse. How awful would it be to realize that your father magically drugged you for years and has a god complex? But we never get a sense of how impactful this is because Miranda is also becoming a burgeoning feminist/character-undergoing-a-sexual-awakening. Yes, we all contain multitudes, but the switching between these two modes of abuse victim and young lover never fully gels. As I was reading, I thought several times "that's NOT how trauma works!"

The plot is also rather thin, which would have been fine if the time had been spent on fully exploring or building the characters. For example, Miranda's love interest, Dorothea, is also given short shrift, playing the roles of 'exotic outsider' and 'magical deux ex machina' alternatively. And the last plot twist (no spoilers) really strains credulity, not because of the presence of magic but because of how the characters react to events and each other. The choices feel as though they are being loudly directed from stage left rather than emerging from actual motivations.

It's a shame, because the author really writes lovely prose. I hope her next writing project cooks longer and finds more depth.
Read more
2 people found this helpful
Report abuse

Ken Austin
5.0 out of 5 stars Charming love story, excellent prose
Reviewed in the United States on 7 April 2019
Verified Purchase
Miranda in Milan is a delightful read. Duckett is a wordsmith of the highest degree, and every page, almost every paragraph had a turn of phrase that made this book a pleasure to consume. The yarn Duckett spins is a good one; the plot moves at a nice pace throughout, and I was constantly looking forward to the next revelation about Miranda, the castle, and its secrets. Finally, Ms. Duckett brings this story to a satisfying conclusion. Highly recommended. I'm looking forward to seeing this work among next year's award nominees.
Read more
3 people found this helpful
Report abuse

Rachel by the sea
4.0 out of 5 stars Tempestuous Imagination
Reviewed in the United States on 7 April 2019
Verified Purchase
I was slow to catch on to this novel. But, once I caught its rhythm and began to appreciate the author's very vivid imagination, I was enthralled. I read the last three quarters of the book in one day. Even though I wasn't very familiar with Shakespeare's play, The Tempest, I appreciated how the storyline complemented the stage drama.
Read more
2 people found this helpful
Report abuse
See all reviews
Back to top
Get to Know Us
Make Money with Us
Let Us Help You
And don't forget:
© 1996-2021, Amazon.com, Inc. or its affiliates