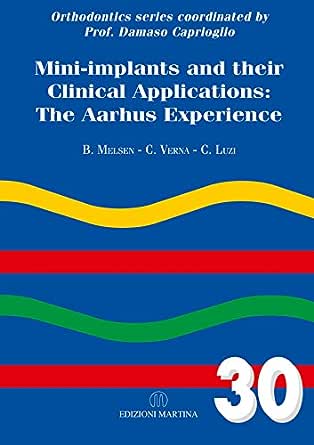 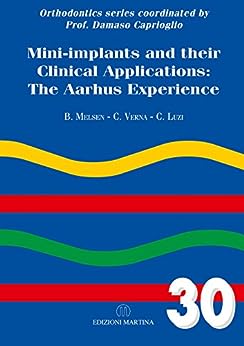 Mini-implants And Their Clinical Applications: The Aarhus Experience Kindle Edition

The need for skeletal anchorage in orthodontics arose in response to the increase in the numbers of adult patients presenting for treatment.

Case workups and analysis disclosed that a large number of these patients could not be treated by conventional anchorage means.

Frequently in these patients the number of teeth available was insufficient for the establishment of the classic treatment strategy of using “fewer teeth against more teeth”.

Additionally, the force systems necessary to obtain the desired tooth displacements would have generated undesirable movements of the reactive units. In other cases, treatment required that all of the teeth be moved in the same direction, a treatment goal that could not be fulfilled by an orthodontic appliance in balance.

After a first failure to apply skeletal anchorage in the mandible in 1945, an attempt was made to retract anterior teeth against a surgical wire anchor inserted into a hole drilled through the inferior part of the zygomatic arch.

This method of skeletal anchorage, which was introduced in the seventies, was limited to use in those patients who only required retraction of maxillary teeth and thus it did not fulfill the anchorage requirements related to a much broader range of tooth movements needed in the entire adult patient population.

An alternative to the zygoma wire was the use of palatal implants as introduced by Werhbein and Glatzmaier (1996).

Both the palatal implant as well as the “Onplant” met the anchorage requirement for retraction of maxillary anterior teeth, but these anchorage devices were introduced primarily as an alternative to extra-oral anchorage and other types of anchorage requiring patient compliance.

After the introduction of dental implants, they were suggested to be used as anchorage in orthodontic patients where they are planned as an integral part of a full dental reconstruction (Odman et al. 1994).

The same type of implants, but with a slightly different design, were introduced as anchorage for the anterior displacement of lower second and third molars following loss of the first molar due to a variety of reasons.

The use of these small osseointegrated implants allowed tooth movements that had not previously been possible, i.e. movement of teeth mesially without introducing any forces to the reactive units.

The first use of a surgical screw as anchorage was described by Creekmore in a case report of a single patient, but this did not immediately attract a lot of attention.

With the advent of the new millennium, the increasing development of surgical devices has led to an accepted definition of TAD (Temporary Anchorage Device), referring to all the surface-treated Implants, the Miniplates and Mini-implants (Mini-screws) used for orthodontic anchorage and removed once obtained the planned movement was achieved.