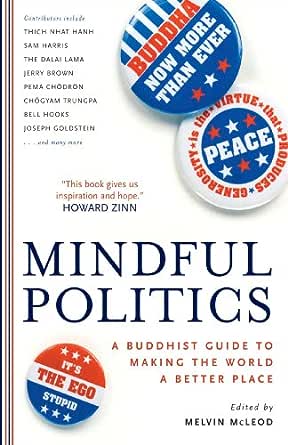 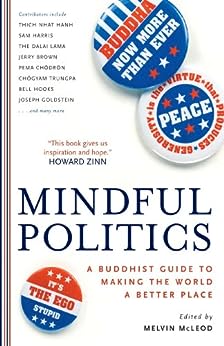 "An anthology like this should have been published decades ago. We all know, politics sucks. It is largely a playground for (individual and national) egos that are fixated on power and self-advantage. The present volume, compiled by the editor-in-chief of Shambhala Sun magazine, consists of twenty-nine very readable contributions that envision politics as a humanitarian enterprise focused on the betterment and upliftment of all human societies. [ . . . ] Melvin McLeod has assembled a galaxy of notables with spiritual credentials, who can shed light on how to humanize politics and--dare we hope--politicians. Delightfully, even Jerry Brown, former governor of California, makes sense. How can the Buddha's wisdom not guide us in that most human of activities called 'conflict resolution, ' or politics? This anthology should be must reading for all aspiring or seasoned politicians, and it also should be placed in the hands of anyone old enough to vote."--Georg Feuerstein, Traditional Yoga Studies

"The obvious failure of ordinary political thinking to create a world of peace and justice should suggest to us that we look further, deeper, for guides to action .The essays in Mindful Politics do just that, gently pushing us to think beyond orthodox solutions, drawing upon ancient wisdom to cope with the violence and insecurity of our time, giving us inspiration and hope."--Howard Zinn, author of A People's History of the United States

"Imagine a mindful politics! That is exactly what these thinkers, activists, and teachers are doing in this marvelous collection of essays. May these perspectives and practices inspire, inform and nurture the next generation of political leaders as well as all of us--since we are all vital living 'cells' in the body of this one world--as we ponder and hopefully contribute in ways little and big to the health of the body-politic, which is nothing less now than the health of not just the nation but the whole world."--Jon Kabat-Zinn, author of Coming to Our Senses: Healing Ourselves and the World Through Mindfulness

"A substantive contribution on how to skillfully address the current state of [political] affairs. This book offers what has been missing from so much progressive theory and practice: ways of bringing peace right into the heart and heat of the struggle. Many pieces stand out, including Charles Johnson's brilliant essay, 'Be Peace Embodied, ' and Thich Nhat Hanh's kick-ass exhortation to the US Congress of how to better govern the most powerful country in the world. I recommend reading and re-reading it. I'm glad to have such a feast to learn from. The world needs it."--Diana Lion, founder of the Buddhist Peace Fellowship Prison Program, in Fellowship magazine

"Mindful Politics lifts the political discussion out of the muck of fundamentalism and turf protection. This book is uplifting, practical, and gives hope where I thought there may no longer be any. Now if only we could sneak copies into the Oval Office."--Susan Piver Browne, bestselling author of The Hard Questions

"Mindful Politics: A Buddhist Guide to Making the World a Better Place has instantly become one of my favorite books. It is an amazing collection of thoughtful and helpful reflections. For the sake of our planet, I can I only hope it will become a bestseller."--James Ishmael Ford, head teacher of Boundless Way Zen, and author of Zen Master WHO? and If You're Lucky, Your Heart Will Break

"Dharma and Politics. It's a marriage made in America, that great, rich melting pot of contradictions. Mindful Politics has gathered the big names--former California guv'ner Jerry Brown, Pema Chodron, Thich Nhat Hanh, even the Dalai Lama himself--around an ancient idea whose time is more relevant than ever: that the enlightened governance of a society transcends issues of gender, class, race--even partisanship. Melvin McLeod's Mindful Politics offers us a first hint of what the consummation between Buddhadharma and American politics might look like--and how to get there."--Waylon Lewis, editor of elephantjournal.com --This text refers to an alternate kindle_edition edition.

Melvin McLeod attended the National Defence College of Canada, the country's highest institution for the study of domestic and international affairs. He is the Editor-in-Chief of Shambhala Sun magazine and Buddhadharma: The Practitioner's Journal. He is also the editor of the Best Buddhist Writing collections. He has spent his life studying politics; he took a degree in political science, including a period of study in Washington, and has covered political stories in his capacity as a journalist. He lives in Halifax, Nova Scotia. --This text refers to the paperback edition.

matcurran
4.0 out of 5 stars A meeting of two mysteries.
Reviewed in the United Kingdom on 10 April 2015
Verified Purchase
A fairly steady look at a possible Buddhist politics from a US standpoint. For Europeans, who know much more about politics than Americans in general and have a range of available standpoints, this book is very weak. It fails to engage with everything except the watery and well polished capitalism of the American media. And, a second major problem, it treats Buddism as a problematic rather than a practicality, an issue rather than an outcome.
All told, it feels like most of the chapters have a ghost at the feast, either the actuality of the contemporary western situation or the security and stability of an ancient and complex world view.
However, if you want a rehearsal of things you might think about if you did more research, and learned much more about each of the words in its title, the book is value for money.
Read more
One person found this helpful
Report abuse

Danielle Johnson
5.0 out of 5 stars Excellent and great bite size chunks
Reviewed in the United Kingdom on 20 September 2016
Verified Purchase
Some great essays. Really enjoyed dipping in and out of the book. Really though provoking. Particularity at a time when Britain voted for Brexit, this was a much needed read. I'd definitely recommend.
Read more
Report abuse

CDaniels
4.0 out of 5 stars Particularly struck by last chapter
Reviewed in the United States on 1 June 2016
Verified Purchase
The last chapter, written by Sam Harris, is the most challenging to Buddhists. I don't remember him mentioning the violence in Sri Lanka, and I think the essay might have been written before violence in the name of Buddhism in Myanmar and Thailand. Without mentioning such specific instances, I think we should all acknowledge that Buddhism can have a dark side, like other religions. When I was younger I thought no wars were ever fought in the name of Buddhism, and was probably a bit smug about it. While there's some validity in this, unfortunately some Buddhists do practice violence and it is wrong to deny this. I think Buddhism is fairly unique in that it can be a life philosophy for atheists, and it is beneficial for a secular Buddhist to call out religious Buddhists on issues like fundamentalism. Others here have reviewed other parts of the book, and as a whole, so I'm not going to repeat these. Don't be surprised by the critical look at Buddhism at the end. It is good, if bitter, medicine to take.
Read more
One person found this helpful
Report abuse

Mike Jones
4.0 out of 5 stars Inspiring for activists and can even serve as self-help
Reviewed in the United States on 24 July 2016
Verified Purchase
Lots of wisdom, and really cool to hear it from people like Jerry Borwn, former gov. of CA. Excellent stuff, but could have been shorter. A LOOOOT of redundant entries, and it doesn't quite live up to its claim of bringing Buddhist philosophy into concrete terms for the real world issues. It stays pretty philosophical. Also, good for them for including the against-the-grain Sam Harris piece.

Sudesh
5.0 out of 5 stars Five Stars
Reviewed in the United States on 27 April 2015
Verified Purchase
Good
Read more
Report abuse
See all reviews
Back to top
Get to Know Us
Make Money with Us
Let Us Help You
And don't forget:
© 1996-2021, Amazon.com, Inc. or its affiliates