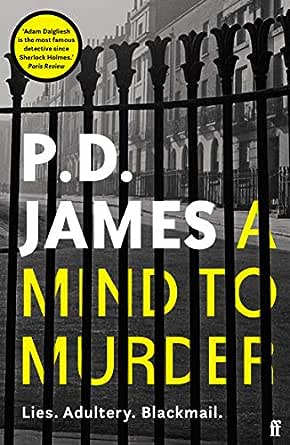 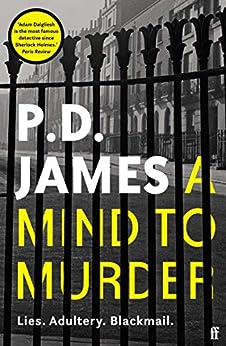 'The greatest contemporary writer of classic crime.' Peter Kemp, Sunday Times 'P. D. James is one of the national treasures of British fiction... Each new book gives pleasure not just for macabre crimes or ingenious solutions but its density of experience.' Malcolm Bradbury, Mail on Sunday 'Unlike so many crime writers, James still has the power to move, fascinate and astonish.' Independent 'James... manages to invest even a simple mystery novel with a depth and intelligence that few in her trade can match.' The Times

A piercing scream, shattering the evening calm, brings Superintendent Adam Dalgliesh hurrying from his literary party to the nearby Steen Psychiatric Clinic, where he discovers the body of a woman sprawled on the basement floor, a chisel thrust through her heart. As Dalgliesh probes beneath the apparently unruffled calm of the clinic, he discovers that many an intrigue lies hidden behind the Georgian terrace's unassuming façade. Professionally, he has never known the taste of failure. Now, for the first time, he feels unsure of his own mastery as he battles to unmask a cool killer who is proving to be his intellectual equal, and who is poised to strike again.A Mind To Murder is the second novel to feature Superintendent Adam Dalgliesh from the bestselling author of Death Comes To Pemberley, Death in Holy Orders and The Children of Men. In 1995 the novel was adapted into a hit film and starred Roy Marsden as the inspector protagonist.
See all Product description

Michelle.Wilson
5.0 out of 5 stars A classic murder mystery
Reviewed in Australia on 23 December 2015
Format: Kindle EditionVerified Purchase
PD James always write a beautiful novel that happens to be a murder mystery. The characters and the plot are tightly drawn and realistic. Adam Dalgliesh is one of my favourite sleuths.
Read more
One person found this helpful
Helpful
Comment Report abuse

jazziegran
4.0 out of 5 stars A good read
Reviewed in Australia on 12 March 2018
Format: Kindle EditionVerified Purchase
Better than book one. The characters are more interesting and the story line better. There was more to keep me reading without struggling to get to the end.
Read more
Helpful
Comment Report abuse

Ian Robert Kerr
4.0 out of 5 stars Short in length but not short in quality
Reviewed in Australia on 18 May 2015
Format: Kindle EditionVerified Purchase
This is the second book in the Adam Dalgliesh series. It is also one of the shortest. In developing her plot P D James draws well from her experience in the Natiional Health Service. Not her best book but still excellent.
Read more
One person found this helpful
Helpful
Comment Report abuse

Hugh Trevethan
4.0 out of 5 stars P D James - A Mind to Murder
Reviewed in Australia on 23 June 2014
Format: Kindle EditionVerified Purchase
PD James is a great writer and I enjoyed A mind to murder.

Having read so many of her books, the overall writing plan is known to me as are the investigative procedures. At this point, I will rest and return to her offerings at some time in the future.

Sandradan1
3.0 out of 5 stars A trifle slow-moving at times
Reviewed in the United Kingdom on 3 June 2015
Verified Purchase
A private clinic, psychiatrists and their patients: potent territory for a crime novelist. The clinic administrator is found murdered in the basement archive, a chisel through her heart. The potential murderer must be within the clinic’s staff and as they set about analysing each other’s alibis and motives, Commander Adam Dalgliesh arrives from a literary party.
A classic PD James, although for me a trifle slow-moving at times as the layout and routines of the clinic are necessarily explored. The culprit? An early suspect I had barely considered. Dalgliesh’s task is complicated by office politics, blackmail, love affairs and ambition.
Read more of my book reviews at my blog http://www.sandradanby.com/book-reviews-a-z/

Fozz
4.0 out of 5 stars The descriptive passages enhance the read.
Reviewed in the United Kingdom on 20 October 2019
Format: Kindle EditionVerified Purchase
This is the second book that I have read by this author and I find the descriptive writing very pleasing as it adds to the plot. I look forward to the next book.
Read more
Helpful
Sending feedback...
Thank you for your feedback.
Sorry, we failed to record your vote. Please try again
Report abuse

BOODLES
2.0 out of 5 stars There's much better to come from P D James.
Reviewed in the United Kingdom on 29 January 2017
Verified Purchase
As with Cover Her face (1962), this book (1963) got an illustrious if uneven career off to an under-whelming start.
Read more
One person found this helpful
Helpful
Sending feedback...
Thank you for your feedback.
Sorry, we failed to record your vote. Please try again
Report abuse

A little lord
4.0 out of 5 stars The Baroness on form
Reviewed in the United Kingdom on 28 March 2017
Verified Purchase
Another top drawer story
Read more
Helpful
Sending feedback...
Thank you for your feedback.
Sorry, we failed to record your vote. Please try again
Report abuse

Ruth Marian Bishop
5.0 out of 5 stars Great
Reviewed in the United Kingdom on 12 February 2016
Verified Purchase
Very very pleased as when the book arrived I'd actually bought this from a charity which I thought was a great idea. Excellent quality.
Read more
Helpful
Sending feedback...
Thank you for your feedback.
Sorry, we failed to record your vote. Please try again
Report abuse

mark weldon
5.0 out of 5 stars Five Stars
Reviewed in the United Kingdom on 2 November 2016
Verified Purchase
Very enjoyable book as to be expected from this author. Promptly sent.
Read more
Helpful
Sending feedback...
Thank you for your feedback.
Sorry, we failed to record your vote. Please try again
Report abuse