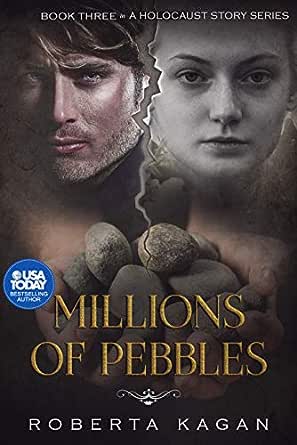 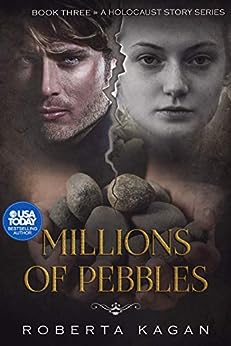 4.3 out of 5 stars
4.3 out of 5
344 global ratings
How are ratings calculated?
To calculate the overall star rating and percentage breakdown by star, we don’t use a simple average. Instead, our system considers things like how recent a review is and if the reviewer bought the item on Amazon. It also analyses reviews to verify trustworthiness.

Kindle Customer
5.0 out of 5 stars Great read
Reviewed in Australia on 29 December 2019
Another great read Roberta. You really make your characters come alive. When I start your books I can't stop reading until last page.
Read more
One person found this helpful
Helpful
Report abuse

Kindle Customer
5.0 out of 5 stars An amazing historical war story.
Reviewed in Australia on 13 November 2020
Verified Purchase
I really enjoyed this story and It gave me an insight into the lives of people during hard times of the second world war.The hatred for the Jewish people and their life in the concentration camps.Verytrue to life as I lived in Holland during the war and we sheltered many Jewish families. Beautifully written.
Read more
Helpful
Report abuse

val brim
5.0 out of 5 stars Absolutely brilliant
Reviewed in the United Kingdom on 14 November 2020
Verified Purchase
What a story
This has to be the best book I have read in a long time
From the love of people to each other to great loses this book will make people sit up and take notice
A brilliant read very factual and true
Well done to the author brilliant

villy reid-veltkamp
5.0 out of 5 stars Absolutely loved this book
Reviewed in Canada on 4 December 2020
Verified Purchase
This was well written and gives you an insight what happened in Germany and the camps ,how the world watched with hoots what was done to the Jews and non Jews , Hittler was the most evil man . How people survived and lived after the war
Read more
Report abuse

Irwin Forman
4.0 out of 5 stars Survival and power during WW2 brutality and their consequences
Reviewed in the United States on 28 January 2020
Verified Purchase
This novel describes different personalities and ways of coping during the Holocaust. Writing is excellent. I have read all Kagan’s prior works in this series but this was my least favorite. It was difficult to appreciate as familiar protagonists were only introduced again somewhat after the midpoint. This lack of continuity led to my difficulty in recalling the roles they played in the series.previously I was happier when they were reintroduced. Ethical issues were explored such as justifiable revenge vs. forgiveness. Nazi monsters should be remembered for their sadistic actions so they will not be repeated.
Read more
5 people found this helpful
Report abuse

TLD
5.0 out of 5 stars Millions of Pebbles
Reviewed in the United States on 28 February 2020
Verified Purchase
Another wonderfully written book by this Holocaust writer. She takes you there and allows you to feel what the characters experienced during the awful times of WW2 in Europe. Ms. Kagan’s books definitely hold one’s interest and make you painfully aware of what human beings are capable of doing to one another when evil prevails.
Read more
6 people found this helpful
Report abuse

Wiseask
3.0 out of 5 stars A decent drama descends into melodrama
Reviewed in the United States on 25 November 2020
Verified Purchase
Some people are born storytellers, and having read her novel Millions of Pebbles, there is no doubt that Roberta Kagan is one of them. Her writing style reminds me of Jeffrey Archer. Neither Kagan nor Archer will ever be known as great writers, but they are both good storytellers.

Frankly, I have never been a fan of Holocaust fiction. There is a plaque at Auschwitz which reads that about a million and a half mainly Jewish men, women and children were murdered there. In her book Kagan wrote, “Every person who died here in Auschwitz had a past; they had a family; they had a story to tell.” Since she had a million and a half true stories to tell, why did Kagan bother instead to fabricate fictional characters and events?

I suppose it’s because Kagan is a novelist, not a historian. She would say that her fictional characters were meant as composites of real people, and in her novel she could create conversations and events that she imagined might have really happened. This is her way of telling the stories of the true victims.

In addition, according to her website, Kagan is the daughter of Holocaust survivors. Presumably she would have heard stories from them which were authenticated by actual experience.

I visited Auschwitz last year with a Holocaust survivor, my wife’s uncle, now age 90, who served as our tour guide. He and my wife’s late father were prisoners there as boys.

From hearing his testimony firsthand and witnessing the exhibits, the buildings where grotesque “medical” experiments were performed on helpless prisoners, and the remnants of the gas chambers and crematoriums, the scope of the evil deeds perpetrated there defies human comprehension. If anything, Kagan’s book understated them.
﻿
If you’re looking for a factual account written by an actual prisoner at Auschwitz, there is none better than Night, the late Elie Wiesel’s haunting memoir. But in Roberta Kagan’s fictional creation of Benjamin Rabinowitz and the many characters he encounters before, at, and after Auschwitz, the emotional payoff in Millions of Pebbles might also have been haunting if the amateurish final chapters had not been marred by melodrama and implausibility.
Read more
One person found this helpful
Report abuse
See all reviews
Get FREE delivery with Amazon Prime
Prime members enjoy FREE Delivery and exclusive access to movies, TV shows, music, Kindle e-books, Twitch Prime, and more.
> Get Started
Back to top
Get to Know Us
Make Money with Us
Let Us Help You
And don't forget:
© 1996-2021, Amazon.com, Inc. or its affiliates