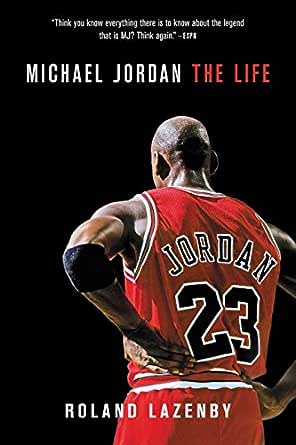 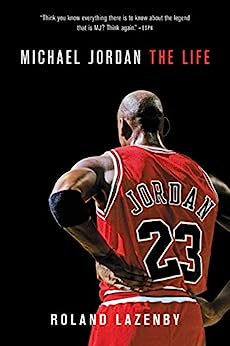 Roland Lazenby has taught journalism at Virginia Tech and Radford University for two decades and is the author of Mindgames: The Long, Strange Journey of Phil Jackson, Jerry West, and Blood on the Horns, among other books. He is a frequent contributor to sports documentaries, including ESPN's Sports Century, and a regular guest on television and radio programs. Lazenby's work has been cited in numerous publications and websites, including Sports Illustrated, the Washington Post, and NBA.com. He lives in Salem, Virginia. --This text refers to an alternate kindle_edition edition.

Roland Lazenby has taught journalism at Virginia Tech and Radford University for two decades and is the author of Mindgames: The Long, Strange Journey of Phil Jackson and Jerry West, among other books. He is a frequent contributor to sports documentaries, including ESPN's "Sports Century," and a regular guest on television and radio programs. Lazenby's work has been cited in numerous publications and websites, including Sports Illustrated, the Washington Post, and NBA.com. --This text refers to an alternate kindle_edition edition.

One of Chicago Public Library's Best Books of 2014 A Goodreads Choice Award Finalist: History and Biography "In his thoughtful, extraordinarily well--researched biography "Michael Jordan: The Life," Roland Lazenby... gives us the life and much more.... The exhaustive narrative of Jordan's basketball career is written with appropriate awe. But what makes this portrayal especially worthwhile is everything else."--Mike Greenberg, New York Times Book Review

"A comprehensive look at the life and times of the man and the legend.... A great work for any sports enthusiast and B-ball fan to read about one of the best that ever came to the game."--Brook Stephenson, Ebony

"A lot has been written about arguably the greatest basketball player of all time, Michael Jordan, but Roland Lazenby's Michael Jordan: The Life is easily the definitive version. The journalist has covered Jordan's career for nearly thirty years and his knowledge of the game and of this miraculous player shows in what is one of the best sports biographies in years."--Parade

"An utterly definitive biography.... The most comprehensive attempt yet made to explain the factors that have gone into producing the most famous basketball player and marketing phenom in the history of world sports....I don't know how it would be possible to write a more complete biography of him."--The Chicago Tribune

"It's not every day that I'm blown away by a book about a sports figure. But MICHAEL JORDAN: THE LIFE, by Roland Lazenby, ranks up there with the very best: The Boys of Summer by Roger Kahn, Friday Night Lights by Buzz Bissinger, and Joe DiMaggio by Richard Ben Cramer. The depth of reporting, his frequent ascent into poetry, and his intelligent analysis of the life of this complicated, fascinating American icon deserve Pulitzer Prize consideration. For the first time I understand what makes Michael Jordan tick. I was captivated, fascinated and beguiled from beginning to end."--Peter Golenbock, New York Times-bestselling author of George and In the Country of Brooklyn

"Lazenby is one of the best, most thoughtful and thorough people writing books on the NBA today, which makes all his books fascinating reads and great looks at the psychology of teams and great players. His stuff is must read."--Kurt Helin, NBC Sports' Pro Basketball Talk

"Lazenby looks beyond the on-court exploits of a sports and cultural icon to find the complicated, and often contradictory, man behind the myth."--ESPN Holiday Gift Guide

"Lazenby's book is impressive in its research. There are details bound to surprise even the most die-hard Bulls fan."--Mike McGraw, The Chicago Daily Herald

"Lazenby's prose soars as dramatically and excitingly as does his subject. Jordan appeared to fly through the air; Lazenby makes time fly as readers immerse themselves in an extraordinarily competitive life. Does any biography deserve 700 pages? When you read Lazenby's Michael Jordan: The Life you'll be hard-pressed to answer anything but yes."--Michael Levin, New York Journal of Books

"Lazenby's thoroughly enjoyable biography is an impressive portrait of a man consumed by his competitive ambitions. It is also by far the most complete book on Michael Jordan to date.... Essential reading for all sports fans and particularly for those interested in American cultural history and popular culture."--Library Journal (starred review) --This text refers to an alternate kindle_edition edition.

The definitive biography of The Greatest, Michael Jordan. --This text refers to an alternate kindle_edition edition.

Praise for JERRY WEST"A superior account of one of American sports' most compelling, complicated figures...by turns, smart, beautifully reported, well-written and psychologically shrewd....Where this book breaks fascinating new ground is in its exploration of West's tormented perfectionism." -- Los Angeles Times"A thoughtful, serious biography of an athlete both blessed and cursed by talent and a competitive spirit." -- Booklist"Lazenby managed to make sense of this complex man...West's career and life deserved a book like this. It's highly recommended." -- Slam Magazine --This text refers to an alternate kindle_edition edition.
Read more

4.7 out of 5 stars
4.7 out of 5
757 global ratings
How are ratings calculated?
To calculate the overall star rating and percentage breakdown by star, we don’t use a simple average. Instead, our system considers things like how recent a review is and if the reviewer bought the item on Amazon. It also analyses reviews to verify trustworthiness.

Hell's Fire.
5.0 out of 5 stars A Big Book.
Reviewed in Australia on 27 June 2020
Verified Purchase
So happy to receive this book that I bought for my nephew who as a young basketball player always loved Michael Jordan.
Wow, when it arrived in excellent condition with the incredible packaging that protected this book which I thought was a thin paper back, how wrong was I, it is big book, never thought it would be that big.
So happy with this order from the time I placed the order to receiving it, this all happened in one week, so impressive, really great & very much appreciated.
I highly recommend this book to fans of Michael Jordan & am sure you will enjoy reading it.
Also, not forgetting this is an incredible buy, don't miss out, buy it now & you will be very happy with your purchase.
Read more
Helpful
Comment Report abuse

Brett
5.0 out of 5 stars Interesting perspective into the GOAT
Reviewed in Australia on 18 December 2018
Verified Purchase
Really good read on the greatest basketballer we will ever see. Really well researched and plenty of different perspectives from family, coaches, teammates, opponents etc which really adds great incite into the greatness of MJ.
Read more
Helpful
Comment Report abuse

tom
TOP 1000 REVIEWER
5.0 out of 5 stars 5 stars - a fantastic and comprehensive book
Reviewed in Australia on 7 October 2016
Verified Purchase
A fantastic and comprehensive biography of Jordan, which goes beyond the Chicago years to the Wizards, Bobcats and Hornets. A must for any fans of basketball or Jordan.
Read more
Helpful
Comment Report abuse

Matt Damian
5.0 out of 5 stars Comprehensive
Reviewed in Australia on 1 May 2015
Verified Purchase
I consider myself to be quite a knowledgeable nba fan, but this book furthered my education of the sport. Lazenby's style of describing a story and offering analysis via quotes of those close to situation via quotes is on full display here. This IS the definitive Jordan book.
Read more
Helpful
Comment Report abuse

Miles Taylor-Charlemagne
5.0 out of 5 stars MJ the Legend!
Reviewed in the United Kingdom on 19 September 2019
Verified Purchase
Took me a while to finish the book, but got there in the end. I'll admit, most of it dragged and was a little boring to read. There were times I wanted to skip some of the pages as I wanted to read most of the interesting stuff. The most interesting stuff I enjoyed reading was when MJ started playing ball for the first time, his time at the University of North Carolina, his brotherly rivalry with his brother, being drafted to the NBA, his time with Chicago, family business, retiring and returning and returning to the NBA for the Washington Wizards and just life beyond Basketball!
Read more
3 people found this helpful
Report abuse

Ryan
5.0 out of 5 stars The Greatest
Reviewed in the United Kingdom on 27 July 2016
Verified Purchase
I didn't get to grow up watching MJ. When I started watching the NBA, it was the end of the Jordan era and close to his third and final retirement. The book cleared up many misconceptions about Jordan. He was the fiercest competitor of them all. He made great decisions about his career. But Jordan was human too. He wasn't perfect but he was the Saint of basketball.

One of the best misconceptions cleared up was the overly shared internet memes about MJ being cut from the high school team. He was already an outstanding player at the time.

Great book - I switched between audiobook and kindle edition (fan of the whispersync feature). I felt like I lived through 30 years of basketball history and this is by all accounts probably the best written book on MJ, if you are interested in basketball, success, the mind of a champion or Air Jordan's...

TP - London UK
4.0 out of 5 stars Good read, especially Jordan's family and early years
Reviewed in the United Kingdom on 26 August 2020
Verified Purchase
Thorough account of Jordan's like, even some of the darker parts of the Jordan family that weren't revealed in any mainstream sources prior, including The Last Dance. If you've seen The Last Dance, there are quite a bit of repetition with some stories told throughout that series, but good for early Jordan childhood and upbringing that weren't discussed in great detail in series.
Read more
Report abuse

Hashim Mohamed
5.0 out of 5 stars A very balanced, honest and well written biography
Reviewed in the United Kingdom on 11 April 2019
Verified Purchase
This a very good read.

Along with lots of well researched information regarding MJ on the court , there is lots of information and research to him as a person.

Barthelemy Antoine
5.0 out of 5 stars A must read to anyone interested in Michael Jordan. Period!
Reviewed in the United Kingdom on 4 April 2016
Verified Purchase
Great book. Covers EVERYTHING about Jordan.
From his ancestors which could explain where his drive comes from. To the off court stories with his family and how Nike came to him.
His success on the baseball court in his early years, his relation with his brother Larry and of course his basketball ascension from high school to the NBA.

Cant recommend it enough to anyone who is interested about Michael Jordan.
Read more
3 people found this helpful
Report abuse
See all reviews
Get FREE delivery with Amazon Prime
Prime members enjoy FREE Delivery and exclusive access to movies, TV shows, music, Kindle e-books, Twitch Prime, and more.
> Get Started
Back to top
Get to Know Us
Make Money with Us
Let Us Help You
And don't forget:
© 1996-2020, Amazon.com, Inc. or its affiliates