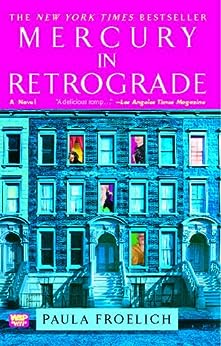 "Written with humor, charm, and heart...readers will love the hilarious misadventures of Penelope Mercury." -- Candace Bushnell, author of One Fifth Avenue

"Mercury in Retrograde marks the emergence of a very entertaining storyteller." -- Sloane Crosley, author of I Was Told There'd Be Cake

"A delicious romp -- our horoscope-addicted heroine will make you laugh and cry. Great fun!" -- Erica Jong, author of Fear of Flying

"Move over, Dorothy Parker...funny, clever and engaging...gives the reader the ultimate insider's view into the looking-glass world of a working girl's Manhattan." -- Gigi Levangie Grazer, author of The Starter Wife

"A delicious romp through the world of Gotham women-about-town. Comparisons to Sex and the City are inevitable, but Froelich, a former reporter for the New York Post gossip register Page Six, puts her knowing spin on the genre. It's the perfect frothy accompaniment to a beachside repast." -- Los Angeles Times Magazine --This text refers to an out of print or unavailable edition of this title.

The deputy editor for the New York Post's Page Six column, Paula lives in New York City. Mercury in Retrograde is her first novel. --This text refers to an out of print or unavailable edition of this title.

It sounds like a movie pitch: Three smart, opinionated young women live in the same Manhattan building and band together to improve each other's personal and social lives. Mixed in is a heady dose of brand names, celebrity name-dropping, and working-girl dialogue. Written by a gossip columnist, this project sounds like the ultimate in chick-lit. Alas, there's plenty of "chick" but not much "lit." With such larger-than-life characters, one would expect that Marguerite Gavin would have a lot to work with in her narration. While she makes a valiant attempt to inject some sass and attitude into her delivery, ultimately it doesn't redeem an unsatisfying book. Fans of Candace Bushnell may enjoy this others, beware." --This text refers to an alternate kindle_edition edition.

Paula Froelich, a well-connected gossip columnist for the New York Post, brings her insider's perspective to this delicious debut about the bonds of friendship among three very different women. --This text refers to an alternate kindle_edition edition.
Read more

3.9 out of 5 stars
3.9 out of 5
39 global ratings
How are ratings calculated?
To calculate the overall star rating and percentage breakdown by star, we don’t use a simple average. Instead, our system considers things like how recent a review is and if the reviewer bought the item on Amazon. It also analyses reviews to verify trustworthiness.

Dana
4.0 out of 5 stars Fun Story Of New York And Rommates
Reviewed in the United States on 2 December 2015
Verified Purchase
Mercury In Retrograde, a book about living with crazy roommates, was the only sensible choice to read on a weekend getaway with my husband, sister, and my sister's boyfriend. This chick lit book followed three women living in New York who befriended each other when their lives fell apart. Penelope struggled to work in the entertainment industry, Lipstick attempted to prove to her socialite parents she didn't need their financial help, and overworked lawyer Dana was rebounding from a divorce. The women were all interesting characters whom I wanted to live happily ever after.

While I didn't necessarily laugh out loud, there were plenty of funny things happening that made this a light read. There was a lot of time spent describing the women's life's before they met and their back story but then the author rushed through how they met and suddenly the women were best friends. Lipstick was my favorite character because she had the most personality. She loved the luxurious life her parents provided for her but had to figure out how to maintain it on her small salary. I immediately sympathized with Dana's life as a lawyer, where long hours were mandatory and law firm owners seemed to delight in the fact that resulted in Dana not having a life. Who knew someone put me in a book! Penelope's story was a bit harder for me to connect with because her journalism job was pretty erratic. I really enjoyed that the women supported one another while they attempted to find love and be successful in New York.

This was a cute story that was worth reading!

Please read more of my reviews on my blog: http://fastpageturner.wordpress.com
or follow me on twitter at @dana_heyde (less)
Read more
Report abuse

Linda Holman
5.0 out of 5 stars An Engaging New Penelope!
Reviewed in the United States on 5 May 2009
Vine Customer Review of Free Product( What's this? )Verified Purchase
This is a debut novel from Paula Froelich. I had my doubts, as the title made me think of the 60's and the Age of Aquarius era. Some of the sections had an apropos horoscope for the 3 main characters ongoing throughout the book, and yet it was nothing like the 60's, thank goodness! The horoscopes were very clever in that they tied into that particular chapter's events.

The main character, Penelope Mercury, is an aspiring journalist, stuck in a dead end job. The two new friends that she makes on her journey are Lena "Lipstick Carcrash" Lippencrass, a broke Upper East Side socialite, and Dana Gluck, a corporate lawyer workaholic, who is having a melt down after her divorce. Are those names or what?!! And, as the title suggests, anything that could go wrong absolutely does!

I felt like I had a front row seat to the New York social calender events, as well as an insider view of Cable TV and the gossip sheets. And the fashion, well, Sex and the City watch out!

I became interested and invested in these characters almost immediately, and I had a lot of fun reading about their antics. The conclusion was satisfying, and the writing was fresh, original and entertaining. Ms. Froelich is quite witty with her Seinfeld styled humorous dialogue. I did not want to put this book down! Get ready to lose some sleep!

kimd
5.0 out of 5 stars Great Read!
Reviewed in the United States on 12 February 2021
Verified Purchase
bought this for my 20-year old daughter to read at college. She called me to tell me how good it is and that she cannot put it down!
Read more
Report abuse

Jayne P. Bowers
3.0 out of 5 stars Growing up in NYC
Reviewed in the United States on 20 April 2011
Verified Purchase
A book club selection for April, Mercury in Retrograde is an entertaining, fun type of book. If you're looking for heavy duty reading with layers of lessons and deep meaning, find something else. However, if you want to read something light that tells the tales of three young women who find themselves in the same SoHo apartment house after upheavals in their lives, then this is the book for you.

Penelope the journalist, Lipstick the socialite, and Dana the lawyer all add their unique quirks and histories to the plot, and all three had changed for the better before the book ended. There were amusing moments (think spray-on) hair, sad ones (imagine seeing your husband with another woman), inspiring ones (picture sewing until the wee hours), and dozens of other moments in-between, most of which make this a fun and delightful read.

While these three young women lived in NYC, their "coming-of-age" stories parallel those of anyone who's ever separated from parents, been broke, experienced the ups and downs of relationships, and struggled at work.
Read more
Report abuse

CMK
5.0 out of 5 stars One of my favorites
Reviewed in the United States on 19 July 2021
Verified Purchase
I reread this book every couple of years & it still makes me laugh! Humor Dialogue Personal growth Characters who I wish were real And a happy ending Love it!
Read more
Report abuse
See all reviews
Back to top
Get to Know Us
Make Money with Us
Let Us Help You
And don't forget:
© 1996-2021, Amazon.com, Inc. or its affiliates