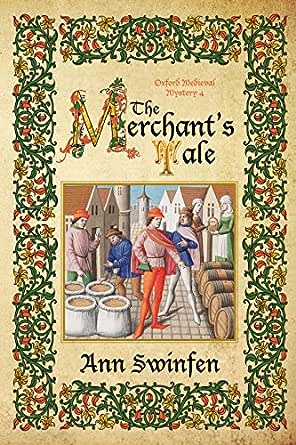 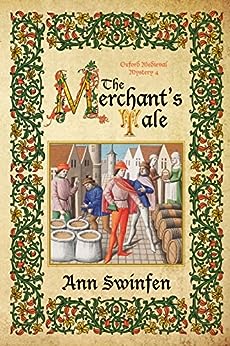 Ann Swinfen is the author of the highly acclaimed series, The Chronicles of Christoval Alvarez. Set in the late sixteenth century, it features a young Marrano physician recruited as a code-breaker and spy in Walsingham's secret service. In order, the books so far are: The Secret World of Christoval Alvarez, The Enterprise of England, The Portuguese Affair, Bartholomew Fair, Suffer the Little Children, Voyage to Muscovy, The Play's the Thing and That Time May Cease. Her Fenland Series takes place in East Anglia during the seventeenth century. In the first book, Flood, both men and women fight desperately to save their land from greedy and unscrupulous speculators. The second, Betrayal, continues the story of the dangerous search for legal redress and security for the embattled villagers, at a time when few could be trusted. Her latest series, Oxford Medieval Mysteries, is set in the fourteenth century and features bookseller Nicholas Elyot, a young widower with two small children, and his university friend Jordain Brinkylsworth, who are faced with crime in the troubled world following the Black Death. In order, the books are: The Bookseller's Tale, The Novice's Tale, The Huntsman's Tale and The Merchant's Tale. She has also written two standalone novels. The Testament of Mariam, set in the first century, recounts, from an unusual perspective, one of the most famous and yet ambiguous stories in human history, while exploring life under a foreign occupying force, in lands still torn by conflict to this day. This Rough Ocean is based on the real-life experiences of the Swinfen family during the 1640s, at the time of the English Civil War, when John Swynfen was imprisoned for opposing the killing of the king, and his wife Anne had to fight for the survival of her children and dependents. She now lives on the northeast coast of Scotland, with her husband, formerly vice-principal of the University of Dundee, a rescue cat called Maxi, and a cocker spaniel called Suki. You can receive notifications of new books and audios by signing up to the mailing list at www.annswinfen.com/sign-up/ Learn more at her website www.annswinfen.com --This text refers to the paperback edition.

4.7 out of 5 stars
4.7 out of 5
142 global ratings
How are ratings calculated?
To calculate the overall star rating and percentage breakdown by star, we don’t use a simple average. Instead, our system considers things like how recent a review is and if the reviewer bought the item on Amazon. It also analyses reviews to verify trustworthiness.

Sheila
4.0 out of 5 stars A REALLY GOOD SERIES
Reviewed in Australia on 19 October 2019
Verified Purchase
This is such a good series. It's well written and interesting and not just all about the crime. There is always a murder but there is so much more; especially enjoy reading about Oxford (which I know) as it was back then. Reading about the medieval fair as it was then was another little cameo of interest as there always are in the books the author writes about. Nicolas, his family and friends are all good characters, some are very interesting. As another reader wrote, Nicolas is at times a bit too good to be true but the plot is good though not overly surprising and I like the historical content and find the stories a pleasure and interesting to read I gave it 4 stars.
Read more
Helpful
Comment Report abuse

Kindle Customer FW
TOP 1000 REVIEWER
5.0 out of 5 stars Engrossing read
Reviewed in Australia on 2 August 2018
Another great story, even bringing in The Black Prince. As ever well researched by the author. Medeaval Oxford springs to life off the page. I am looking forward to reading the next two available. Recommended to all lovers of medeaval detection.
Read more
Helpful
Comment Report abuse
See all reviews

Bretton Girl
4.0 out of 5 stars Lovely series of books. This is a worthy addition to the saga
Reviewed in the United Kingdom on 12 September 2017
Verified Purchase
I have enjoyed this and the other related books in the series because they offer an insight into the day to day lifes of quite everyday people, including mostly those of the yeoman and lower classes with some glimpses of the lives of the great and mighty they interact with but largely they are about the common people and have the added nuance of an amateur sleuth who is not a physician or cleric but a bookseller and repectable family man. Some sleuths in other historical novels are almost as unsavoury as the villains while others come across as very modern minded men and women somehow unaturally sewn loosely into the fabric of a time they don't seem to belong in. This is not so with either Swinfen's sleuth, in fact even minor characters seem real and of the 14th century. Lovely tales worthy of reading in comfort with a hot drink and a slice of cake.
Read more
2 people found this helpful
Report abuse

Penny Booth
5.0 out of 5 stars Transported back......
Reviewed in the United Kingdom on 5 September 2017
Verified Purchase
Another great tale from the medieval times by Ann Swinfen. I so enjoy these and they appear very real, as if you were there. Perhaps I am a fan of Oxford, it's very atmospheric and it is so nice to have roads and places one now knows mentioned in these tales. This is the fourth tale with the same main character and his family, but you won't be prevented from enjoying this one if you have not read the previous three. I think you'll want to read the earlier ones once you read this one. I was delighted to find this fourth tale (I am a recent 'convert' to Swinfen's historical drama/thrillers after sampling the first three of the Elizabethan ones. I'll be reading more of her - entertaining stuff!
Read more
One person found this helpful
Report abuse

In this series by Ann Swinfen, the main character is a bookseller from Oxford, Nicholas Elyot. The stories happen in less high echelons of England's medieval society than in the Cadfael series. But we still have glimpses of nobles and abbots, as pointed out by another reviewer here.

What I liked best is the same feeling of accompanying the day to day life in medieval times, and learning about how people interacted and how their material needs were met.

I'm crossing my fingers that the author will keep writing this series!

I'm posting this same review in all the four already published books of this series, for I liked them all, and would like to signal it to potential readers.

Kindle Customer derek uk
2.0 out of 5 stars I thought the series might improve
Reviewed in the United Kingdom on 18 May 2018
Verified Purchase
As in book 3 it takes too long to get started and the plot is so obvious that it can be solved by the reader about halfway thro the book
To be frank this looks like a money spinner set of short stories with loads of background day to day stuff but very little mystery and a non existent love life
The 13/14 centuary background can lifted from many sources so is not some special gift of this writer it's just padding out of a rather poor short story
Read more
Report abuse

Fred Irvine
5.0 out of 5 stars Historic storytelling
Reviewed in the United Kingdom on 7 June 2019
Verified Purchase
Another most enjoyable tale with enough historical background to be interesting without becoming wearing. Excellent and credible characters woven into a fascinating story. A really splendid series.
Read more
Report abuse
See all reviews
Get FREE delivery with Amazon Prime
Prime members enjoy FREE Delivery and exclusive access to movies, TV shows, music, Kindle e-books, Twitch Prime, and more.
> Get Started
Back to top
Get to Know Us
Make Money with Us
Let Us Help You
And don't forget:
© 1996-2020, Amazon.com, Inc. or its affiliates