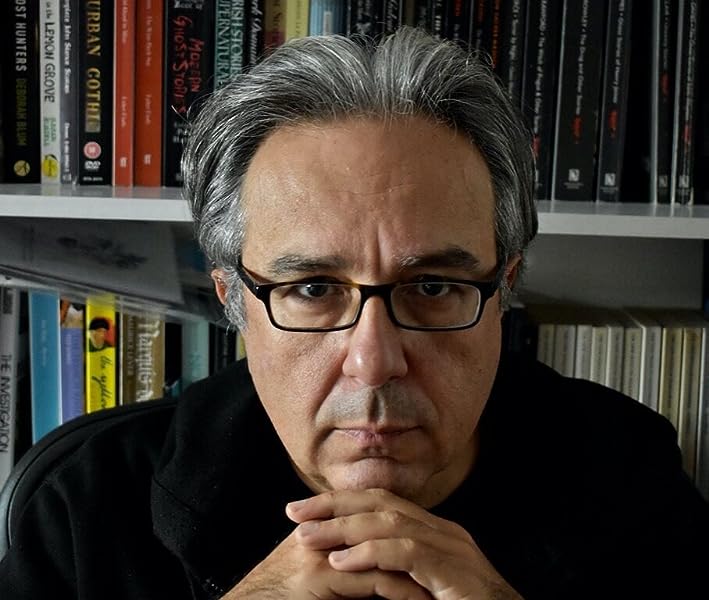 by F. R. Tallis (Author)
4.5 out of 5 stars 109 ratings
See all formats and editions
Sorry, there was a problem loading this page. Try again.

Page 1 of 1 Start overPage 1 of 1
Previous page
Next page
Start reading Mephisto Waltz (Max Liebermann Mysteries) on your Kindle in under a minute.

“Mephisto Waltz takes us to Vienna in 1904: a city of widespread culture, fading empire and an abundance of nervous energy. Tallis, a London author and psychologist, has written a marvelous, multi-layered thriller, rich with period detail and studded with cameo appearances by figures such as automaker Ferdinand Porsche and Sigmund Freud. Mephisto Waltz often exhibits the energy of the Franz Liszt pieces after which it’s named: a ‘wild and sinister delirium,’ in Liebermann’s perception, in which ‘notes sparkled, glittered [and] exploded like fireworks.’ Yet the book is also undercut with a dark and sophisticated wit.” -- Tom Nolan - The Wall Street Journal

“Paradise, according to Frank Tallis in Mephisto Waltz, is an exact replica of early-20th-century Vienna. That would make angels of the psychoanalyst Dr. Max Liebermann and his friend, Detective Inspector Oskar Rheinhardt, the brainy sleuths in Tallis’s erudite series of historical mysteries.” -- Marilyn Stasio - New York Times Book Review

“Tallis' seventh period mystery is his most intricate and ambitious yet.” -- Kirkus Reviews

“Max Liebermann is a psychiatrist and follower of Freud's theories who often finds himself assisting his friend, police detective Oskar Rheinhardt. They are just two of a large, vividly described cast of characters. Distinctly of their time, the characters nevertheless suggest parallels to people and phenomena of our own time.” -- www.historicalnovels.info

“Mephisto Waltz is an intricately but elegantly written mystery as much as it is an immersion in the time. Vienna in 1904 is brought to life through vivid and detailed illustrations of situations, places, food, and the cultural milieu.” -- Historical Novel Society

“If you’re looking for the best in popular fiction, Tallis is well worth seeking out.” -- The Washington Post [Praise for Frank Tallis]

“Clever and spooky. The novel is an elegantly constructed psychiatric Gothic, all spires and gargoyles and ghostly echoes―the sort of vast, dread edifice we sometimes build around ourselves when the lights go out.” -- The New York Times Book Review [Praise for Frank Tallis]

“What we have here is a proper scare-your-socks-off horror novel.” -- The Financial Times [Praise for Frank Tallis]

“Tallis is a clinical psychologist, which is reflected in his deft character development and realistic dialogue.” -- The Sacramento Bee [Praise for Frank Tallis]

“Gripping. Dialogue is fast paced, and the action is vivid and realistic. A story that is full of adventure and more.” -- Foreword Reviews [Praise for Frank Tallis]

Frank Tallis is a writer and clinical psychologist. Between 1999 and 2012, he received or was nominated for numerous awards, including the New London Writers' Award, the Ellis Peters Historical Dagger, the Elle Prix de Letrice, the Crime Writers' Association Historical Dagger Award, and two Edgar Allan Poe Awards. Under the name F. R. Tallis, he is the author of The Sleep Room, The Forbidden, The Voices, and The Passenger, all available from Pegasus Crime. He lives in London.

4.5 out of 5 stars
4.5 out of 5
109 global ratings
How are ratings calculated?
To calculate the overall star rating and percentage breakdown by star, we don’t use a simple average. Instead, our system considers things like how recent a review is and if the reviewer bought the item on Amazon. It also analyses reviews to verify trustworthiness.

gerardpeter
5.0 out of 5 stars Welcome Return
Reviewed in the United Kingdom on 17 July 2019
Verified Purchase
Mephisto Waltz is the latest instalment in a long running series featuring a detective and a psychiatrist. As well as solving criminal cases, Oskar Reinhardt and Max Liebermann perform musical duets and eat some very fine cakes. It is Vienna 1904.

The narrative whizzes along in fifty short chapters, each ending on a dramatic note. Tallis renders time and place well. In Mephisto Waltz the challenge is presented by terrorists, based on anarchists of the period. His heroes use good old fashioned police work [Rhinehardt] and the new ideas of Freud [Liebermann] to unravel plots and save the day.

Alongside run domestic matters. The previous novel hinted that Oskar was heading for a coronoary and indicated that the love interest in Max’s life – Amelia – had returned to England. But all is well enough in both departments. There will be other adventures I am sure, but time will soon be called on the Austrian Empire.
Read more
Report abuse

old dude
5.0 out of 5 stars Excellent series finale
Reviewed in the United Kingdom on 30 January 2020
Verified Purchase
Read the whole series in record time - good to have series that has a definitive conclusion whilst still leaving you wanting to hear more of Oskar, Max and Amelia... not to mention Herren Prof Freud and Direktor Mahler. Excellent detective stories with sumptuous helpings of history, psychiatry, music and lots of cake - I even googled the cake ! Looks like Frank Tallis thought he’d finished the series with Death and The Maiden but was tempted to make this last bow with the imminent (and in the event disappointing) TV mini-serialisation - I’m very glad he did.
Read more
Report abuse

Celestine
4.0 out of 5 stars Entertaining series
Reviewed in the United Kingdom on 27 January 2020
Verified Purchase
I have read all the "Vienna" book by the author and I've thoroughly enjoyed them. What Frank Tallis has managed to achieve in a detective genre on the model of Sherlock Homes and Watson. The two main protagonists are well observed and well drawn. There is a familiarity with their stories that develops, certain attitudes that become trademarks.
Above all it's the picture of Vienna at the turn of the 20th century that is captivating, complete with cultural, political and social background. The research is very thorough but the writing is of such quality that it never feels artificial. They are all page turner and the reader is guaranteed to be entertained in the best possible way.
Read more
Report abuse

Amazon Customer
5.0 out of 5 stars An atmospheric, twisting mystery
Reviewed in the United Kingdom on 23 March 2018
Verified Purchase
I was delighted to read this new instalment in the Max Liebermann series - set in Vienna c.1900. The story's location is vivid, with beautifully-written period details of music, food, pastimes and developing scientific discoveries. The plot is brimming with intrigue and manages to combine anarchist politics, love stories, family life and intricate forensic investigations with a healthy dose of psychoanalysis. The villain is a particularly dark and complex character. It was really interesting to discover how much of the book was based on real events - it's clear Tallis has done his research. Looking forward to another one... Thoroughly recommended.
Read more
One person found this helpful
Report abuse

J. C. Milner
5.0 out of 5 stars Highly recommended
Reviewed in the United Kingdom on 19 July 2020
Verified Purchase
I really like this series of books. The way they bring to life the crime, characters and the city of Vienna.
Read more
Report abuse
See all reviews
Back to top
Get to Know Us
Make Money with Us
Let Us Help You
And don't forget:
© 1996-2021, Amazon.com, Inc. or its affiliates